This series looks at how Toronto’s press has covered major world events. 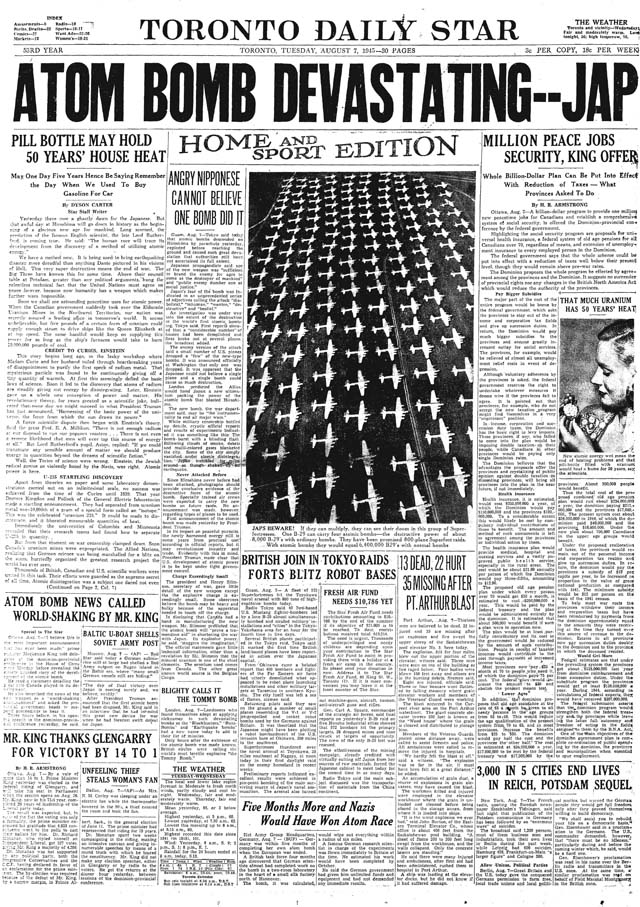 In the midst of a federal-provincial conference session in the House of Commons on August 7, 1945, Prime Minister William Lyon Mackenzie King made a statement. “I believe this is the most important announcement that has ever been made,” he told his audience before relaying the role that Canada had played in developing the atomic bomb that had just been dropped on Hiroshima. He was optimistic that the terrible new weapon would finally bring the Second World War to an end. 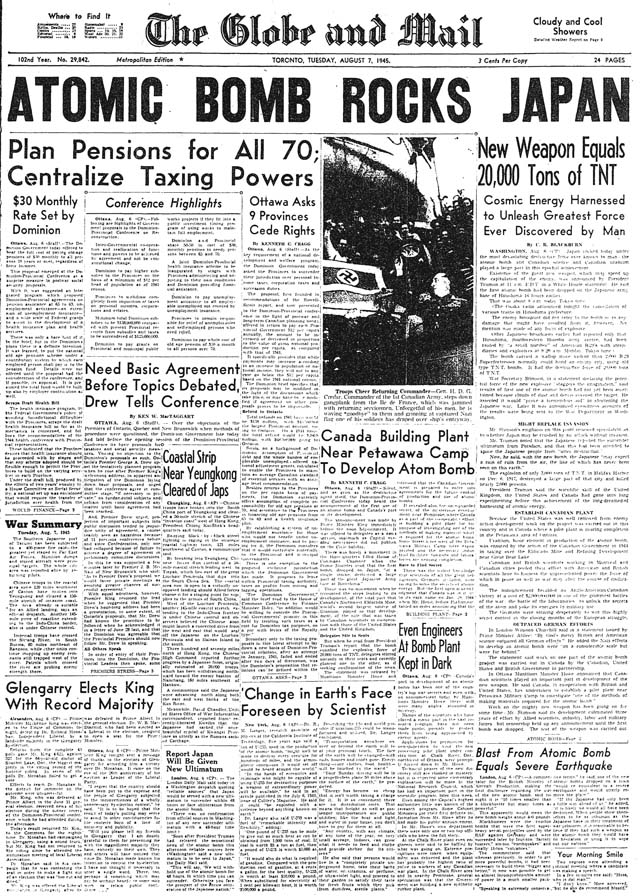 Much of the initial coverage of the bombing in the Globe and Mail and the Star focused on what the atomic bomb was, how Canadian research and uranium supplies had aided its development, and the federal government’s plans to expand its research and production lab in Chalk River.

There were also numerous comparisons to the most comparable wartime Canadian event that readers could relate to: the Halifax Explosion of 1917. Initial estimates compared the destructive force of the bomb to seven Halifaxes.

Headlines throughout the papers suggested the Japanese should surrender…or else. For example, one Star headline read “the atomic bomb offers the Japanese annihilation if they don’t surrender unconditionally–and quickly.”

Both papers used this diagram, which appeared across North America. The descriptions below it varied, from giving a basic description of what an atom is to providing tons of statistics.

Here’s an example of how the diagram was used on an American front page.

While there were concerns about the future destruction atomic weaponry could unleash, there were also many stories dedicated to depicting the potential future benefits of atomic power. “Uranium can end the war quickly by destroying Japan,” a Star headline observed, “but in peace it offers unheard of power for good.” Visions were presented of uranium-fueled cars, ocean liners, and trains providing speedier travel options. Future generations might look back to the bombing as the moment that hydroelectric generators like Hoover Dam and Niagara Falls would become obsolete in the face of Old Man Atom.

Local experts were asked for their opinions on the development and potential of atomic power.

A Star editorial provided thoughts on the situation of Japanese Canadians and attempts to “repatriate” them back to Japan. In the following years, the nature of their internment would gain greater public knowledge, leading to the federal government’s official apology in 1988. 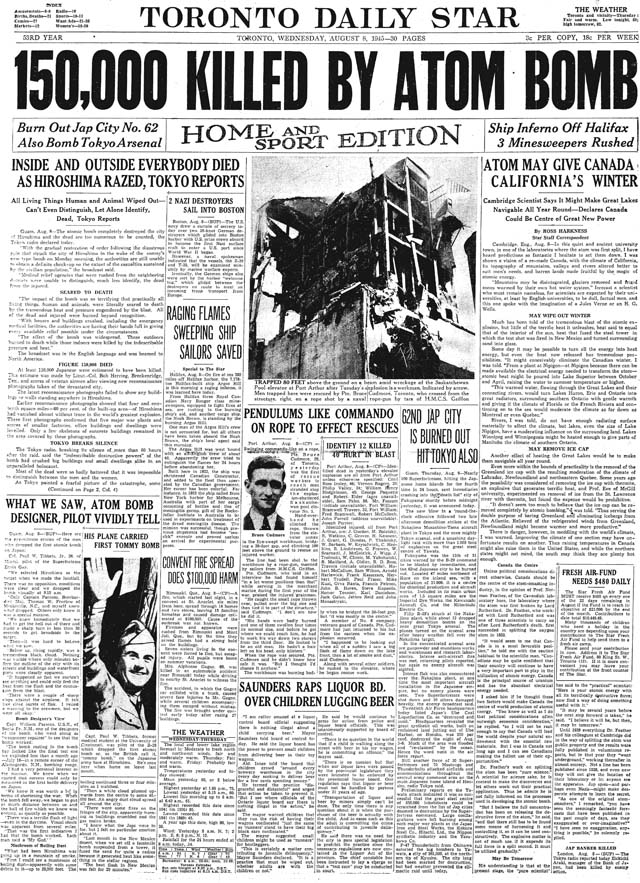 The front pages on August 8 highlighted the extent of the damage to Hiroshima. In the Star‘s case, page one also included more fantasies about the positive potential of atomic energy in reshaping the environment of the Great Lakes.

An excerpt from a vision of warmer winters in the Great Lakes. Note the potential effects that sound frightening with the knowledge we’ve gained over the past 75 years regarding melting ice caps and climate change. Other British scientists suggested that Canada should become “the centre of the atom-smashing industry.”

In case you were curious glancing at that day’s front page, here’s the story about Mayor Robert Hood Saunders’ ire at provincial liquor officials for allowing children to deliver beer for pocket change.

I wonder if people were stocking up on as much beer as possible (and giving potential juvies plenty of booze-running gigs) in anticipation that the end of the war was inching closer to reality.

While the front pages mentioned the Nagasaki bombing on August 9, the main headlines were devoted to the Soviet Union’s declaration of war against Japan.

By August 10, both papers expressed hopes in their headlines that, amid the destruction left by the bombs and the entry of the Soviet Union, that the Japanese were preparing to surrender. The city announced that there would be an official public holiday the day after the war officially ended.

Those celebrations were less than a week away…

A sampling of front pages from elsewhere:

Note: Due to COVID-19 related closures, issues of the Telegram were unavailable for the post.

This series will look at how Toronto’s press has covered major world events. First up: the opening of the Suez Canal 150 years ago.

Given the time period, with its slower pace of news delivery, limited space available in a standard four-page edition, and emphasis of local politics over most foreign events outside of the United Kingdom or United States (an average session of the Ontario legislature or Toronto city council would have received miles more print than the opening of the canal did), there wasn’t much to browse.

The “Darien Canal” discussed here relates to proposals for a canal through present-day Panama connecting the Atlantic and Pacific Oceans. Scotland made an unsuccessful attempt at the end of the 17th century that cost over 2,000 lives and was a motivating factor behind the Acts of Union in 1707. Suez Canal developer Ferdinand de Lesseps started work on a canal in 1881 but the project was bankrupt by the end of the decade. The United States acquired the Canal Zone in 1903 and finished the Panama Canal in 1914.

The Globe‘s conservative rival, the Leader, ran a lengthy reprint of the Cincinnati Gazette‘s coverage on its front page (the Globe ran a shorter reprint the next day). Toronto’s other daily, the Telegraph, offered no coverage.

And now, a few words from your local advertisers…