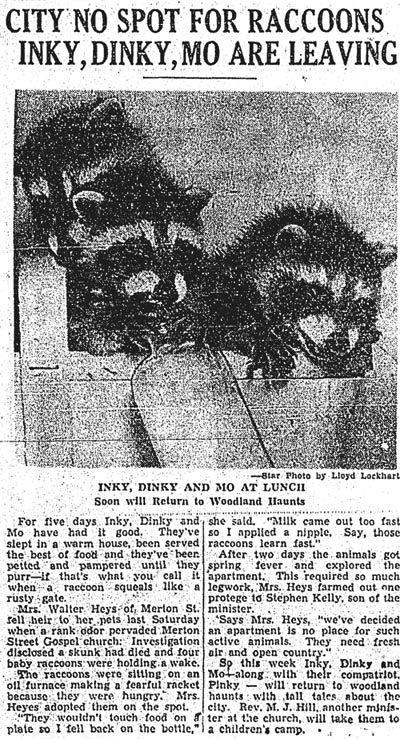 The trio’s temporary home, Merton Street Gospel Mission, was a non-denominational church which stood at 399 Merton from 1899 to 1970. The site is currently commemorated with a parkette and historical plaque. 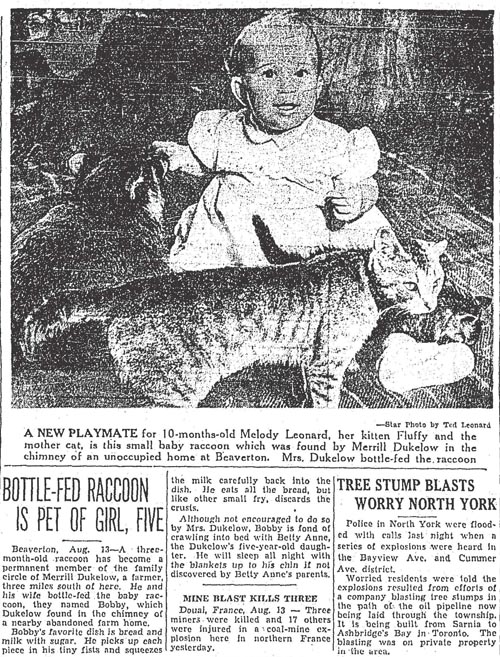 Meanwhile, from the same year, news of raccoons in the hinterlands…

Raccoon furs were frequently advertised in Toronto newspapers during the late 19th century. Among the vendors was the original location of Fairweather. The Globe, March 10, 1896.

A pair of short stories from the 1890s this week…

From the May 21, 1895 edition of the Toronto Star, under the possibly-a-racist-joke title “A New Coon in Town.” We do not recommend risking your life the way one participant in this story did.

At the corner of Queen and Berkeley Streets at eight o’clock this morning five hundred people congregated to witness the antics of a raccoon that had escaped from its owner and had taken refuge on a telegraph pole. A man climbed the post with a bag to capture the animal, and narrowly escaped breaking his neck. The coon finally jumped from the top of the pole without suffering serious injury.

(Among the many reasons I’m wondering about the nature of the article’s title? Near the top of the same page is an ad for a Yonge Street clothier depicting a baby in blackface.)

From the May 2, 1899 edition of The Globe, under the heading “Want a Game Preserve,” it sounds like raccoons were not the only urban wildlife found near The Annex:

People in the north end of the city are beginning to think a menagerie has been turned loose in that vicinity. On Saturday a raccoon was captured on Bloor Street and the incident caused some talk. On Sunday afternoon Miss Jessie Alexander, while walking down Brunswick Avenue, met a young bear, who was taking a stroll. The presence of the cub was reported to the police, and he was taken into captivity, and now the residents of the street are waiting for a boa constrictor or a monster lion. 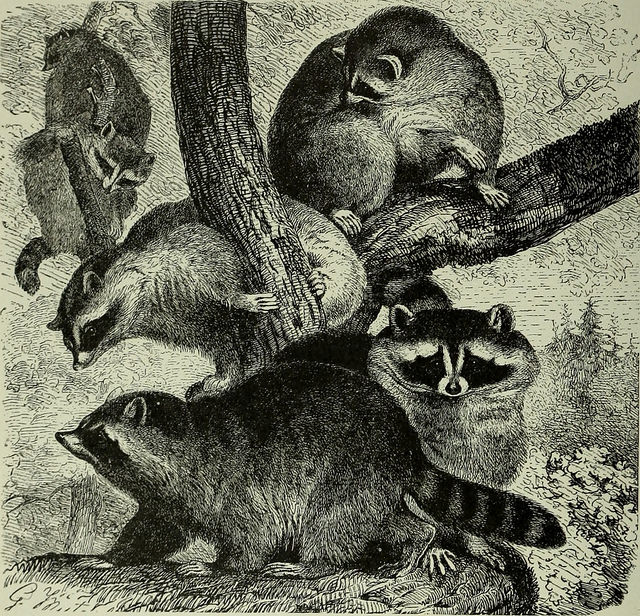 Illustration from Brehm’s Life of animals : a complete natural history for popular home instruction and for the use of schools. Mammalia (Chicago: Marquis, 1896). Flickr Commons.

The common raccoon (Procyon lotor) is a mid-size mammal distinguished by its black face mask and ringed tail. It is a member of the Procyonidae, a primarily tropical family of omnivores native to the Americas — and the only one of this family found in Canada. Raccoons are found in every province except Newfoundland and Labrador. A nocturnal species, it is highly adaptable and can survive in urban areas as well as wilderness habitats. Humans often consider raccoons pests due to their skill and persistence in raiding garbage bins, gardens and crops for food. – The Canadian Encyclopedia

I recently shared on social media a story I’d stumbled upon during a research dumpster dive into archived Toronto newspapers. It was a 50-year-old Toronto Star article about a heroic raccoon.

It may have received the largest number of hits, retweets, etc., for anything I’ve ever personally posted.

Which sparked an idea.

There’s an appetite for stories about raccoons and Toronto. We’re fascinated by reports of their ingenuity, whether it’s conducting home invasions or opening raccoon-proof compost bins. Partly because of their craftiness, and partly because they’re everywhere, “trash pandas” are the city’s unofficial mascot.

Raccoons are one of the few wildlife species that have thrived despite human expansion. Those accustomed to urban settings are skilled at raiding waste bins in search of human leftovers. As opportunistic feeders, they are naturally curious. They will try to open any container or bin that contains food, and they often succeed in this task. This has become such a problem in Toronto, Ontario that the city introduced “raccoon-resistant” green bins in 2016. – The Canadian Encyclopedia

They also have few f**ks to give. Whenever you stare them down as they dig for treasure in a garbage bin, their eyes tell you that they don’t take your threat to ruin their fun seriously. Their escapades, and nuisance factor to homeowners, represent the outlaw spirit people hate to admit they admire. 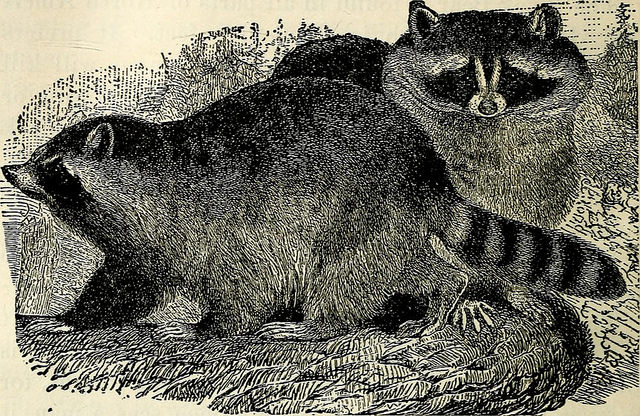 The Raccoon is about the size of a fox, and an inhabitant of Canada and other parts of America. It is said to wash its food before eating it. Its skin is valuable, and is much sought after. The food of the Raccoon is principally small animals and insects. Like a squirrel when eating a nut, the raccoon usually holds its food between its fore-paws pressed together, and sits upon its hind-quarters while it eats. Like the fox, it prowls by night. – Jennie Ellis Burdick and Charles Welsh, Children’s Own Library (New York: National Library Company, 1910).

So, in honour of the raccoon, I’m launching Trash Panda Thursdays. Each week, I’ll share stories, ads, and other materials marking the long history of raccoons in Toronto. 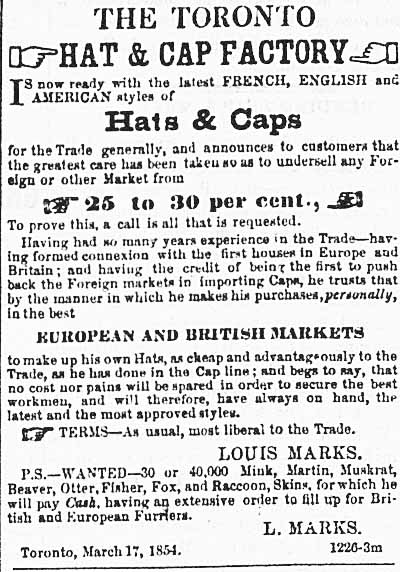 Browsing the Globe archives, the earliest reference using “raccoon” as a search term is an advertisement running throughout April 1854 offering cash for skins required for fulfil “an extensive order” for British and European furriers.

For much of the 19th century, raccoons only received press when they were transformed into a stylish hat or fashion accessory. For a tale involving a live specimen, let’s jump to a December 23, 1871 Globe feature surveying the Christmas season offerings from vendors at St. Lawrence Market. A pet raccoon was used by one of the vendors to distract customers away from other butchers displaying their finest livestock carcasses.

Mr. Fred Robson shows eight very fine cattle, which were purchased at the late Guelph fair, and also ten fine carcasses of mutton. A good deal of attention was attracted to Mr. Robson’s stall yesterday by the gambols of a playful young pet raccoon.

19th century language alert: according to Merriam-Webster, “gambol” means “a skipping or leaping about in play.”