Originally published on Torontoist on June 19, 2007. 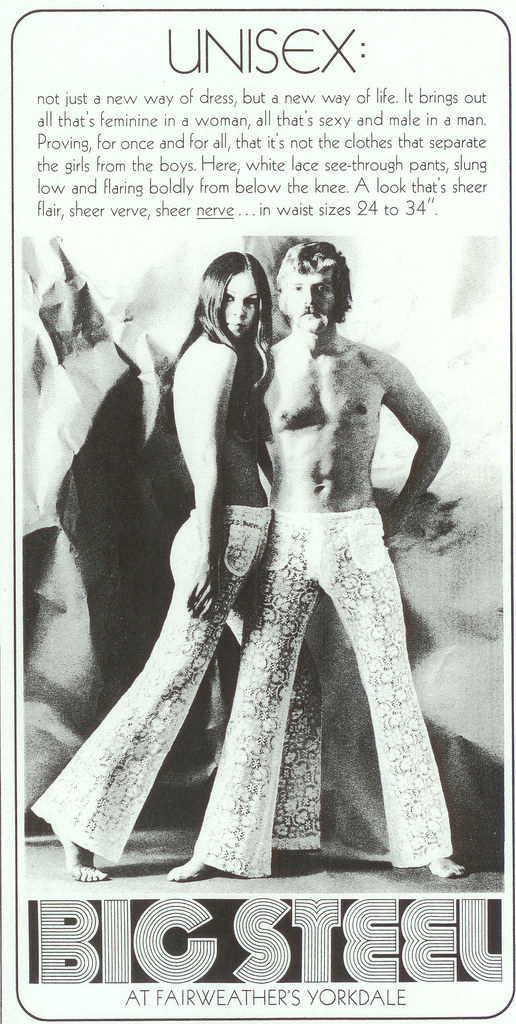 The late 1960s were a time of throwing off the shackles of traditional societal gender norms, including the rules surrounding who could wear lace pants. Unisex clothing popped up on runways mid-decade, reaching suburban malls by the time today’s ad appeared.

Opened in the winter of 1964, Yorkdale’s original anchors included Eaton’s (recently converted into the H&M/Old Navy wing), Simpson’s (now The Bay), Dominion (now Holt Renfrew) and Kresge’s (the five-and-dime progenitor of K-Mart). The mall was strategically located for accessibility to two major expressways, even if one (the Spadina, now Allen Road) was never fully built. Fairweather is still among the tenants, though its Big Steel Man division, which existed as its own chain in the 1970s and 1980s, vanished years ago.

Our models appear ready to toss off their pants quickly, but for different reasons—while she may be ready to discover free love, he looks shellshocked by the new style; too emotionally detached to enjoy any amour. Sheer nervousness, perhaps? A bad audition for a part in the Toronto production of Hair (mounted at the Royal Alex a few months later)?

As for those with less-than-svelte waistlines, they were sheer out-of-luck.

If memory serves, this was one of the first installments to gain traction around the interwebs, if only for the silliness of the image. I suspect the market for men’s see-through white lace pants was limited for any number reasons – personally, I’d feel like I was wearing a tablecloth.

Going through these early entries, I’m struck by how slight some of them are compared to what Vintage Ads evolved into (especially its second run, where the posts were effectively mini-Historicists). No wonder I could knock them out in a hurry at the time.

Originally published on Torontoist on June 12, 2007.

Is your wardrobe lacking that all-important “pocket pizzazz”? Not feeling preppy enough as spring winds down? Need snazzier purple pants the next time you Hulk out? Look no further than today’s ad!
Note the exclusivity of the jackets compared to the pants. White preppy tennis gear and red bomber jackets were way too cool to be sold to the hoi polloi outside the 3 km radius of the Bay’s Bloor St store (Queen and Yonge was still Simpson’s at this point). As for the pants, pizzazz knows no geographical or socio-economic boundaries!
Feel free to slip on a pair of shades and rock out to your favourite 1980s movie soundtrack.

Originally published on Torontoist on June 5, 2007. 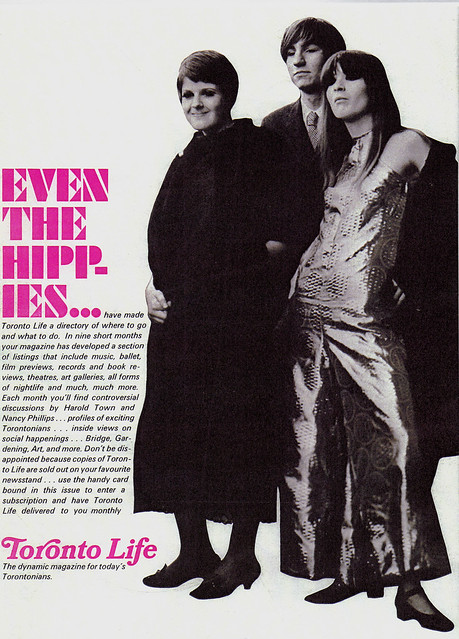 Businesses rushed to latch onto hippies during the “Summer of Love” as their next target market, if only to convince squarer clientele of how their product swung with the times (and there was a lot of swinging going on within the pages of Toronto Life’s first half-decade).

The pair on the right appears to be part of a Velvet Underground-style band—he with Sterling Morrison/Andy Warhol pockmarked skin, she with Nico’s icy reserve.

The model on the left? Three possibilities:
1) A tourist from the suburbs, pulled away from her garden to make the other two look less remote and threatening.
2) A “lady who lunches” in training, hoping to eventually earn a passing reference on the monthly social calendar photo spread.
3) The only member of the trio who actually hung out in Yorkville.

As for Toronto’s hippies that summer? In August, a sit-in was held to push the city into making Yorkville Ave a pedestrian mall. Despite arrests and follow-up events (a Queen’s Park love-in and City Hall sleep-in), Yorkville was not closed to traffic. The idea of a pedestrian mall lived on, with the Yonge Street Mall experiment during the 1970s and comtemporary special event versions such as P.S. Kensington. 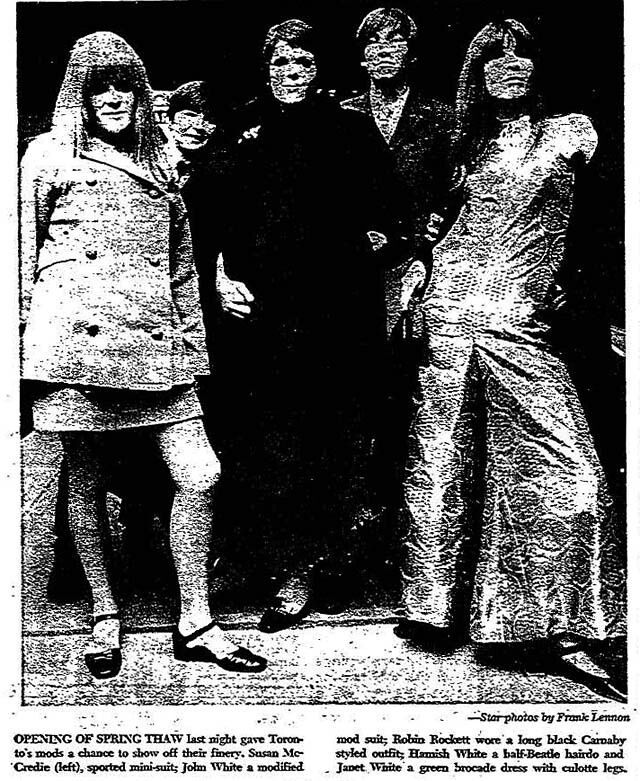 I don’t know if the ad’s models were ever part of any band, but several years after the original post was published, I stumbled upon a Star article about opening night for the 1967 edition of the annual Spring Thaw theatrical revue. And there were the three “hippies” from the Toronto Life ad, only here they were dubbed “mods.”

Following the show at the Royal Alexander, these young hippies/mods/swingers/fashionistas/whatever-you-want-to-call-them may have joined in the opening night party at Ed’s Warehouse restaurant. Among the attendees were Ontario Lieutenant-Governor Earl Rowe and Maple Leafs star Frank Mahovlich. Among those not present were former Ontario Premier George Drew (stayed at home due to a slipped disc; his wife went) and Mayor William Dennison (at the evening’s other major arts opening, the National Ballet’s production of Swan Lake at the O’Keefe Centre). 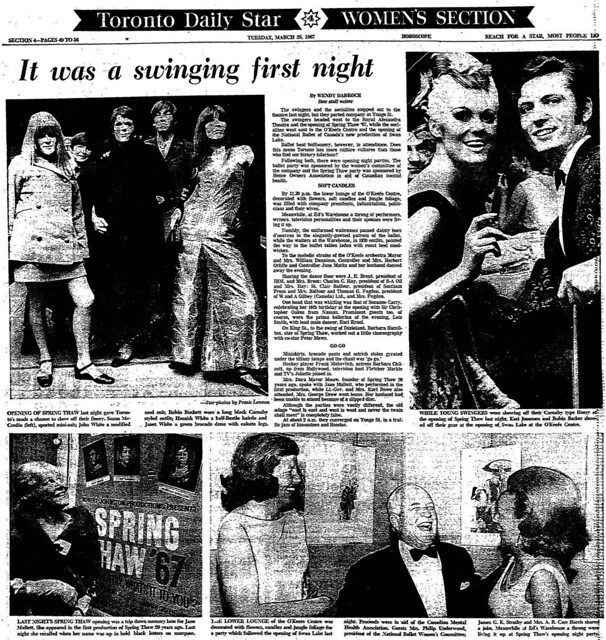 Some of the proceeds from opening night benefitted Niagara Lodge, a summer camp for psychiatric patients operated in Niagara-on-the-Lake by the Metro Toronto branch of the Canadian Mental Health Association. Previously used as a hospital for First World War vets suffering from TB, the aging campsite required plumbing to replace obsolete outhouses and repairs to roofs and walls. 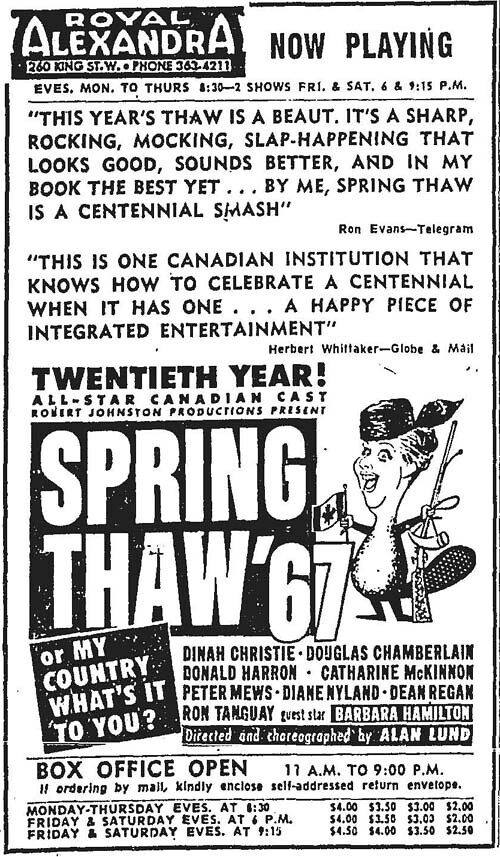 Besides poking fun at the Centennial Year, the 1967 edition of Spring Thaw, My Country What’s It To You, marked the revue’s 20th year. Written by Don Harron, the show had sold out 58 of its 60 performances across the country before reaching Toronto. It took a humourous look at Canadian history from the ice age onward.

The Globe and Mail‘s Herbert Whittaker enjoyed the show: 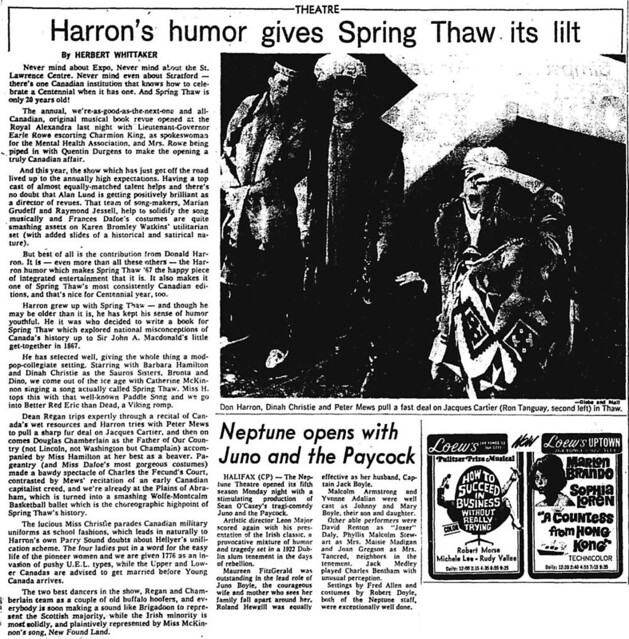 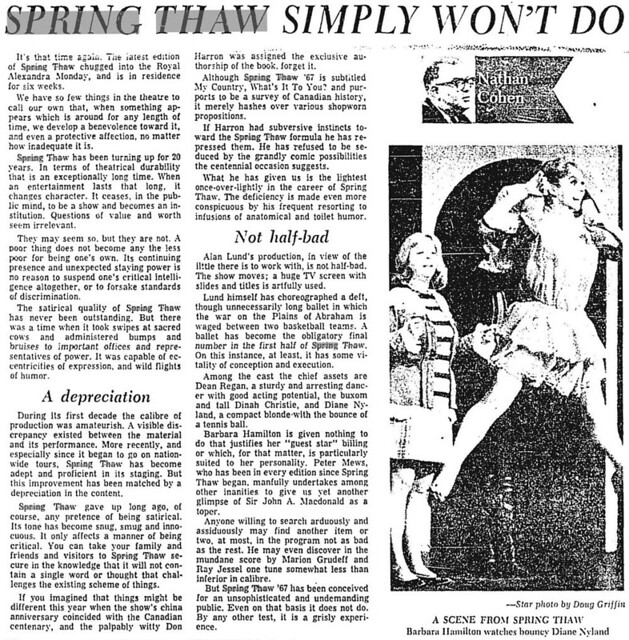 These reviews reflect each critic’s style: Whittaker highly supportive of Canadian work, Cohen wanting something better than the norm. My guess is that I’d probably be inclined to side with Cohen on this one, possibly because such patriotic humour isn’t my taste, probably because Harron’s humour regarding Canadiana feels antiquated these days (going by the endless copies of Charlie Farquharson books lining fundraising book sale tables and thrift shop shelves, and the one time I saw him perform at a Heritage Toronto Awards ceremony).

Originally published on Torontoist on May 29, 2017. 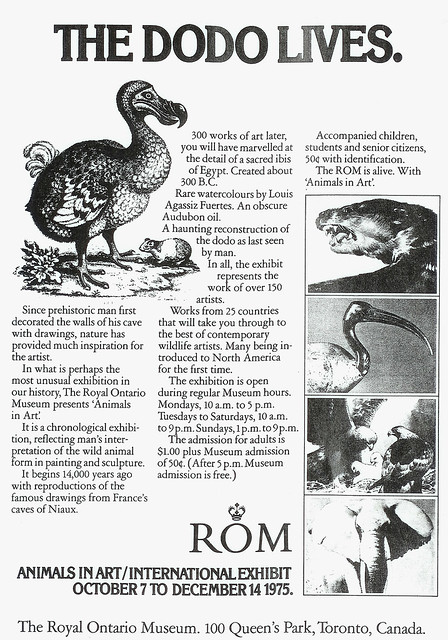 It’s a big week for the Royal Ontario Museum, with the public unveiling of the Michael Lee-Chin Crystal days away. Will any of the displays added to the new galleries over the next year wrest the claim of “most unusual exhibition” title from today’s ad?

Probably, since Animals in Art’s claim appears to be hanging artwork in the ROM instead of, say, the Art Gallery of Ontario. The works advertised sound as if they could have fallen comfortably within the realm of the ROM’s natural history collection.

Here’s a follow-up idea: there are natural museum history displays around the world of animals in their habitats that are now so old that samples can be shown as period art, depicting man’s view of the natural world in the mid-20th century. Incorporate a history of representations of nature in art and institutions. All it requires is a catchy name and suitable corporate sponsor (note the lack of one here).

“The Crystal’s interesting. I think it will be interesting to hear people’s opinions. There’s going to be strong opinions on both sides.”–Toronto Mayor David Miller, 2007. (source for both quotes)

Has it really been a decade since the ROM Crystal opened? Ten years on, Daniel Libeskind’s sketched-on-napkins design remains a controversial addition to the city’s landscape. Two years after it opened, the Star reported that it finished eighth of a list of the 10 ugliest buildings in the world by the Virtual Tourist website (which the Crystal has outlasted). In 2015, a Globe and Mail investigation revealed how some donors still hadn’t paid their contribution to the ROM’s overall mid-2000s renovations. This year, the museum all but admitted the Crystal’s flaws by announcing plans to reopen the former main entrance on Queen’s Park.

Originally published on Torontoist on May 24, 2007.

Toronto rheumatism sufferers, are you ready to receive holy praise on the newest patent cure to hit the streets of our city?

This ad follows the formula of many period ads for remedies: an endorsement from a respected figure, extolling the virtues of how the product has helped their family over the years. We can verify the identity of this acid user — Reverend Alexander Gilray (1843-1915) had been minister of the College Street Presbyterian Church since the mid-1870s, presiding over the opening of its permanent home at the northwest corner of College and Bathurst in 1885. Gilray’s residence at 91 Bellevue Ave, built in 1887, is a heritage property that is now part of the St. Stephen’s Community House organization . His congregation later became College Street United Church.

One hopes he didn’t reek strongly of vinegar during the Sunday sermon.

Originally published on Torontoist on May 14, 2007. 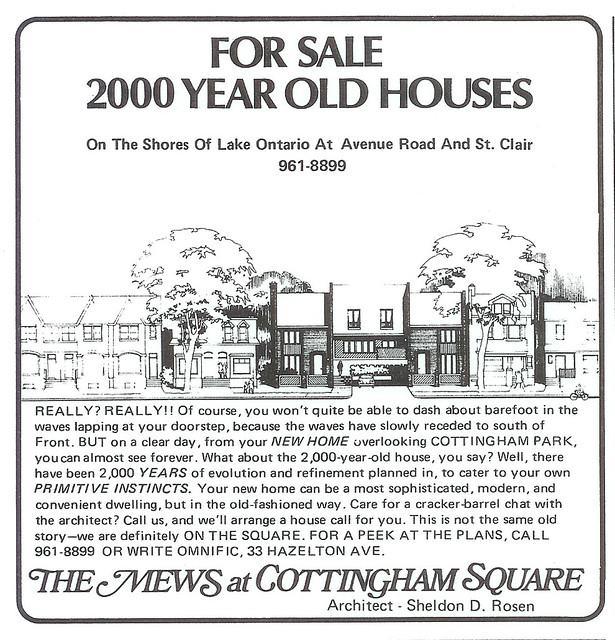 Actually, it was more like 12,000 years ago this area was the shoreline of what has come to be called Lake Iroquois, but what’s a few thousand years among friends? Really?

Formed during the retreat of the glaciers during the last ice age, Lake Iroquois covered areas of the city south of Davenport Rd, with lagoons stretching as far north as Leaside. Its traces can be found in the ravines, with the most visible legacy in the area near this project being the bluff rising towards Casa Loma.

Given the wording used in this ad (“primitive instincts,” “dash about barefoot”), the drawing seems to be missing either a scantily-clad model in caveman-movie wear or a “noble savage” dashing in front of the homes, while the architect sitting on a cracker barrel watches idly.

Anyone willing to place bets on which homes or landmarks in Toronto will still be standing in 4007?

Originally published on Torontoist on May 7, 2007. 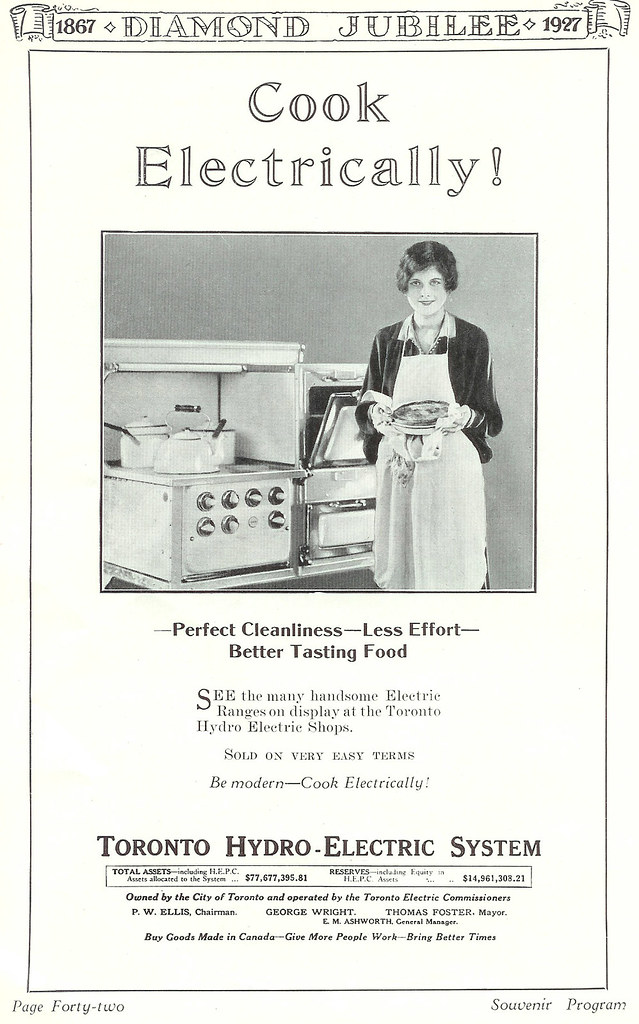 Today’s homemaking hint: tossing out the old gas or wood stove or abandoning the fireplace for a sparkling new electric range will improve household cleanliness, make your food taste better and produce a happier chef! That’s not just dinner our average housewife is holding, it’s the taste of progress!

The closing line about buying Canadian goods to “bring better times” was good advice but poorly timed, given the financial rollercoaster of the next decade. At least one could drown their sorrows in another piece of electrically-cooked pie.

The Toronto Hydro-Electric System was created in 1911 and gradually took over a number of private operators that had provided the city with power. The book this ad appeared in provides a short history, which mostly provides a list of dignitaries associated with company, several with “Esq.” attached to their name (no doubt to prove just how important they were).

From the same source, a few facts about Toronto in 1927: