Originally published on Torontoist on March 11, 2008. 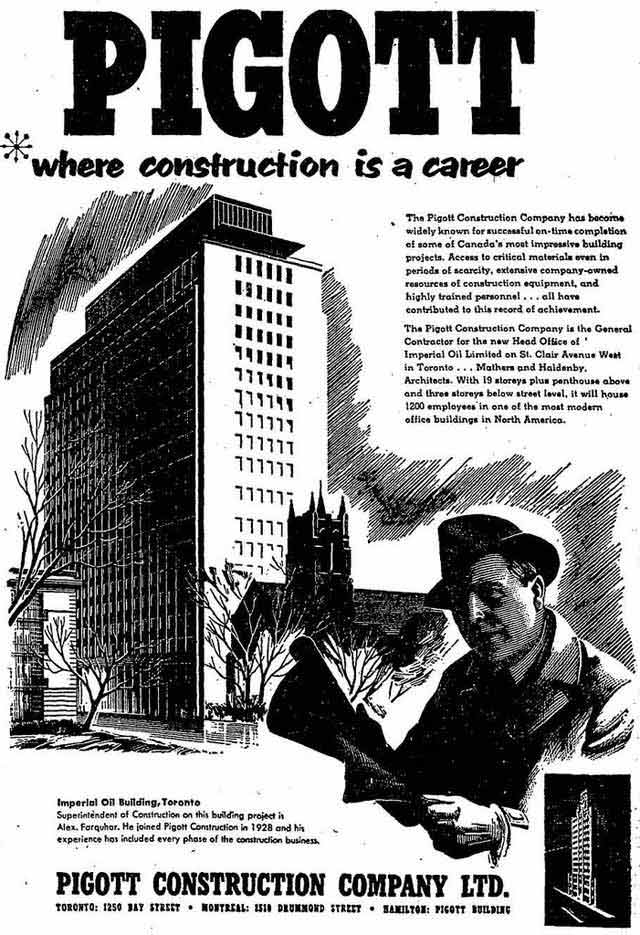 Today’s ad features your stereotypical 1950s architectural professional: trenchcoat, tie, hat (preferably a fedora), and a fistful of building plans. The building this dapper construction supervisor is depicted next to would quickly become one of St. Clair Avenue’s architectural landmarks.

Pigott Construction was based in Hamilton, where company president Joseph Pigott contributed heavily to the community as a president or board member of institutions such as McMaster University and the Art Gallery of Hamilton. His company built one of Hamilton’s first skyscrapers, which still bears his name. Among the buildings Pigott worked on in Toronto are the Royal Ontario Museum and the Toronto-Dominion Centre.

Alex Farquhar would have been putting the finishing touches on the Imperial Oil Building when today’s ad appeared, as the first employees moved in a month later. The building was designed by Mathers and Haldenby, a firm that also contributed to the Canada Permanent Building at 320 Bay Street, the Mowat and Ferguson Blocks around Queen’s Park and the Robarts Library. The design selected by Imperial Oil was intended for Toronto’s new city hall but was rejected in a 1955 plebiscite where the public was asked to approve $18 million for the project.

Artistically, Imperial Oil commissioned York Wilson to create a mural for the lobby. Three years in the making, “Story of Oil” depicts the journey of black gold from prehistory to the mid-20th century.

The building served as the company’s head office until 2005, when operations were moved to Calgary. It is currently vacant, a state of affairs recently lamented by Christopher Hume in the Toronto Star.

The building was converted into the Imperial Plaza, which includes condos and retail. Many of the building’s heritage features were retained, including “Story of Oil,” which can be seen in the current LCBO and Longo’s stores. “While it was once reserved for oil bigwigs and thoroughly vetted visitors,” Dave Leblanc observed in the Globe and Mail in 2016, “Mr. Wilson’s masterwork now turns the humdrum act of shopping into the highbrow appreciation of Canadian art. A Heritage Toronto plaque was unveiled in 2016.

From November 2011 through July 2012 I wrote the “Past Pieces of Toronto” column for OpenFile, which explored elements of the city which no longer exist. The following was originally published on June 3, 2012.

As the 1960s dawned, the discount department store heralded a new era of shopping. While Toronto had been home to stores such as Honest Ed’s for some time, the new breed of bargain emporiums were large, suburban sites which promised low prices, self-service and plenty of parking. Two years before future industry giants K-Mart, Target, Wal-Mart and Woolco opened their first stores in the United States, Towers brought Metro Toronto consumers a taste of the future of retail.

Launched as the Canadian division of U.S.-based Towers Marts International, the chain’s plan was to erect stores, sell them to recover the capital costs, then lease them back. Concessionaires rented space inside each store to operate individual departments—one merchant ran men’s clothing, for example, while another ran the pharmacy. The initial 14 concessionaires, including familiar names like Coles books, signed a one-year deal, with the cost of the lease afterwards determined by their sales volume. By coming together under one roof, everyone saved money by using common cashiers, bags and fixtures. 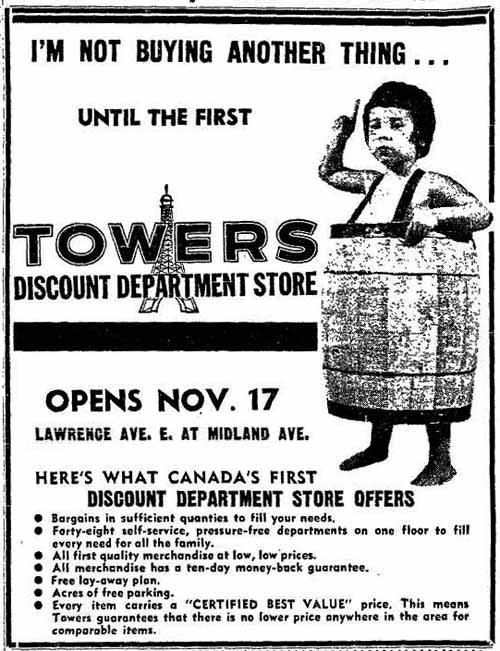 After six weeks of construction, the first Towers store opened at Lawrence Avenue East and Midland Avenue in Scarborough on November 17, 1960. An ad printed in the Star two days earlier depicted a child clad only in a rain barrel declaring “I’m not buying another thing” until the doors opened. The ad promised shoppers “bargains in sufficient quantities to fill your needs,” “forty-eight self-service, pressure-free departments on one floor to fill every need for all the family,” and “acres of free parking.” The festivities included the crowning of Mrs. Canada, who represented “the nation’s happiest housewife,” or at least the happiest homemaker to shop at Towers.

More gimmicky touches were used when Towers opened its third store on Dundas Street West between Bloor and Roncesvalles in June 1962. The first 1,000 customers could spend money to get more money—in this case, silver dollars for 80 cents. Seven sets of triplets, ranging in age from 3 to 34, were on hand to perform duties that including modelling the chain’s latest fashions and burying a time capsule intended to be left untouched until 2062.

Whether Towers would survive one more year, let alone 100, was a reasonable question. Messy relationships with its concessionaires, an inability to sell properties as fast as they were built, and a split with its American parent led to Towers falling into receivership in March 1963. During a creditors meeting at the King Edward Hotel that month, the receiver noted that untangling Towers’ affairs was “the most complicated matter I’ve ever been connected with” thanks to numerous unfavourable agreements it had made. Sales weren’t helped whenever customers unhappy with one concessionaire’s products said to heck with the rest of them and never set foot in Towers again.

The ultimate solution to the company’s problems was a gradual acquisition by grocer Oshawa Wholesale (later known as Oshawa Group) between 1965 and 1967. The chain’s numbers were boosted when Oshawa converted its Rite-Way discount stores to the Towers banner. The concessionaire model was phased as leases expired. Many stores built thereafter were paired with a Food City supermarket. Apart from some bumpiness in the mid-1970s, the chain became profitable and opened stores around Toronto in spots like the Galleria on Dupont Street.

Despite appearances in shows like Degrassi Junior High, Towers’ modest store count made it an attractive proposition for a sell-off as the 1990s loomed and Oshawa Group concentrated on its food and drug businesses. A bidding war erupted between the Hudson’s Bay Company and Woolworths for the 51-store chain, with HBC emerging the victor in October 1990. Over the next year, most of the stores were converted into Zellers locations. Figuring out where Towers locations were in Toronto without a store list isn’t too difficult: the tell-tale signs are malls and plazas where Zellers was/is located in close proximity to a FreshCo/Price Chopper/Sobeys grocery store.

The first time I wrote about Towers was the following installment of “Vintage Toronto Ads” originally published on Torontoist on October 30, 2007:

With Halloween almost upon us, the mind turns to the dark side. Though today’s ad seems innocent enough on the surface, its evil intentions are evident from its most prominently displayed sale price. While humans usually sell their soul to demons for wealth, power or self-sacrifice, all your eternal fate will earn you at Towers is a pair of cheap polyester pants.

Halloween items were likely among the products on sale when Towers opened their Galleria location in the fall of 1972. The mall site was previously home to the Dominion Radiator Company. An essay on the industrial life of Dupont Streetreferred to the heating manufacturer’s replacement as “soulless,” so perhaps devilish dealings were afoot beyond these pants.

Towers was one of Canada’s earliest discount department store chains. After being purchased by Oshawa Group in 1967, several locations included or were built next to their grocery (Food City) and drug (Kent) stores. The chain had 51 stores across Ontario, the Maritimes and Quebec (as Bonimart) by the time it was sold to the Hudson’s Bay Company in 1990. Within a few months most locations, including the Galleria, were converted to Zellers stores.

Other than the price, the main eye-catching element is the artwork. The legs are so spindly that the “B” model snapped in two after attempting to stand straight.