Originally published on Torontoist on February 4, 2016.

Marking the end of the Second World War in Chinatown, August 12, 1945 (two days before the official declaration was signed). City of Toronto Archives, Globe and Mail fonds, Fonds 1266, Item 98337.

A glance at the listing for Adelaide Street East in the 1878 city directory shows a mix of Anglo-sounding businessmen whose trades range from contracting to insurance. The name at number 9 stands out: Sam Ching & Co, Chinese laundry. Mr. Ching’s presence was a cultural milestone, as he was the first recorded Chinese resident of Toronto.

Since Ching’s era, Toronto has included several Chinatowns, a term which has evolved from its original negative connotation. As Library and Archives Canada observes, “’Chinatown’ was coined in the 19th century as a European concept to signify an undesirable neighbourhood full of vice, and peopled by an inferior race.” That proper Torontonians of the early 20th century viewed the city’s small Chinese population—just over 1,000 in 1910—as lesser beings puts it mildly.

Both the respectable and gutter press hyped up the “yellow peril,” editorializing on how the eastern mindset was alien to western concepts of democracy and good citizenship, and how the Chinese would corrupt morals via gambling and opium. Efforts to curb their presence in the laundry and restaurant trades ranged from licensing fees to unsuccessful attempts by City Council to deny business licenses. Paranoia led to provincial legislation preventing Chinese-owned businesses from hiring white women, lest they be sold into white slavery. The Rosedale Ratepayers Association wanted to keep Chinese laundries out of their neighbourhood, adding them to the long list of things people don’t want in Rosedale.

While there had been small clusters of Chinese along Queen Street (one at George, another at York), by the end of the First World War a stable community established itself in The Ward, the neighbourhood west of Old City Hall which, despite its great poverty, had welcomed numerous immigrant communities. Elizabeth Street between Queen and Dundas served as this Chinatown’s spine, lined with businesses, restaurants, and societies. It mostly served single men, thanks to a series of harsh immigration measures preventing families from joining them. These laws escalated from head taxes to the Chinese Immigration Act of 1923, which all but banned entry to Canada for two decades.

Over that time, the “almond-eyed Celestials,” as the Globe dubbed Chinese residents during the early 1920s, endured frequent police raids on gambling houses, a riot, and periodic rumours of imminent tong wars. If anything, the gambling dens offered lonely people social space, work, and shelter during hard times. Viewed as a threat to the existing social order, the Chinese found Chinatown a refuge they felt accepted in.

Major changes came after the Second World War. The end of the Chinese Immigration Act led to a slow reunion of families. Provincial liquor law reforms allowing cocktail bars provoked a restaurant boom in Chinatown. Locals and tourists dined at Kwong Chow, Lichee Garden, Nanking Tavern, Sai Woo, and other eateries which benefitted from both the new booze rules and increasing interest in Chinese-Canadian cuisine.

There were also new threats. The City acquired properties at the southern end of Chinatown to build the current City Hall and Nathan Phillips Square. By 1967, the city’s development commissioner recommended that the remaining buildings be replaced by municipal structures. Lead by the likes of Kwong Chow owner and community activist Jean Lumb, the Save Chinatown committee fought to preserve what was left. Lumb presented her arguments to the Star:

One reason why we feel there should always be a Chinatown in a city the size of Toronto is simply that there has been one, and to have it lost would be strongly felt. Its existence has its effects on people, especially as long as there are new Chinese immigrants coming every year. We should have a spot for them to start from, a place where they can be among their own people, hear their own language spoken. The Chinese people are quiet and reserved; it takes them longer than many other immigrants to make friends, to get used to new ways.

Some people say a Chinatown encourages ghettos and this is a reason why it shouldn’t be, but that’s not so. It just gives the people a sense of belonging. It’s a nice environment for them until they’re ready to go on their way more and fit into the Canadian community.

After a series of deputations in 1969, City Council decided to keep what was now known as Old Chinatown. Efforts to keep the neighbourhood alive during the 1970s included Dragon Mall (a pedestrianized Elizabeth Street, à la the Yonge Street Mall) and earning recognition as a tourist destination. Over time, large scale development projects crept in and the remaining Chinese businesses closed. By the 21st century little remained beyond historical plaques marking where the neighbourhood had been.

Meanwhile, the gradual loosening of immigration rules during the 1960s prompted an influx of arrivals, especially from Hong Kong. As the old Chinatown shrank, a new one grew to the west along Dundas and Spadina, replacing the Jewish community which was moving north. By the late 1970s this area was recognized as downtown’s primary Chinatown, marked with cultural motifs and Chinese-language street signs.

For those who found Spadina too pricey or touristy, there was Chinatown East, which emerged at Broadview and Gerrard. Starting with the opening of Charlie’s Meat in 1971, the neighbourhood’s affordability attracted businesses which served an increasing number of migrants from mainland China and Vietnam.

By the mid-1980s, new Chinatowns developed in the suburbs. The influx of new businesses and residents revealed that fears of the “yellow peril” were far from dead. Agincourt became a flashpoint in 1984, as a wave of immigrants from Hong Kong (on the move as the end of the British lease on the colony in 1997 loomed) arrived. Some longtime residents were alarmed by the new faces around them. “I don’t want to be biased or prejudiced but I don’t think they should be allowed to come into a neighbourhood and take over with such force,” 30-year resident Mildred Jackson told the Star. A heated community meeting ostensibly about parking issues related to the recently-opened Dragon Centre and two other plazas at Sheppard Avenue and Glen Watford Drive degenerated into jeers and racist remarks. The tone may have been set by the meeting’s chair, who referred to the “rape of our community” and that “we should not actively encourage any group to cling together as an enclave” (he later wrote the Star to protest that his remarks were taken out of context). Flyers distributed to homes asked for tougher immigration policies, alleging links between new arrivals and crimes across the Pacific.

Backlash against emerging Chinese business and commercial areas continued over the next decade as new enclaves emerged in Markham and Richmond Hill. But Agincourt also pointed the way to the nature of later areas, from large restaurants to Asian-themed shopping centres like Pacific Mall.

In a book profiling Canadian Chinatowns, Paul Yee summarized how the role of these neighbourhoods changed from a necessary presence to ensure the community’s safety to being woven into the urban fabric.

Some Chinese saw old Chinatowns as living monuments to a turbulent history and to the fragility of equality. Others saw them as sites where Chinese culture was preserved and shared. Both these views supported the building of cultural facilities there. In a sense, old and new Chinatowns bridged the historical divide between Chinese Canadians, because more and more people appreciated Chinatowns’ different functions and freely visited them.

The fear of the “yellow peril” in action – one of the more jaw-dropping (from a modern perspective) editorials regarding the place of Chinese in Canadian society during the early 20th century.

A profile of Chinatown, which tosses off a “gee, aren’t they cute?” vibe. 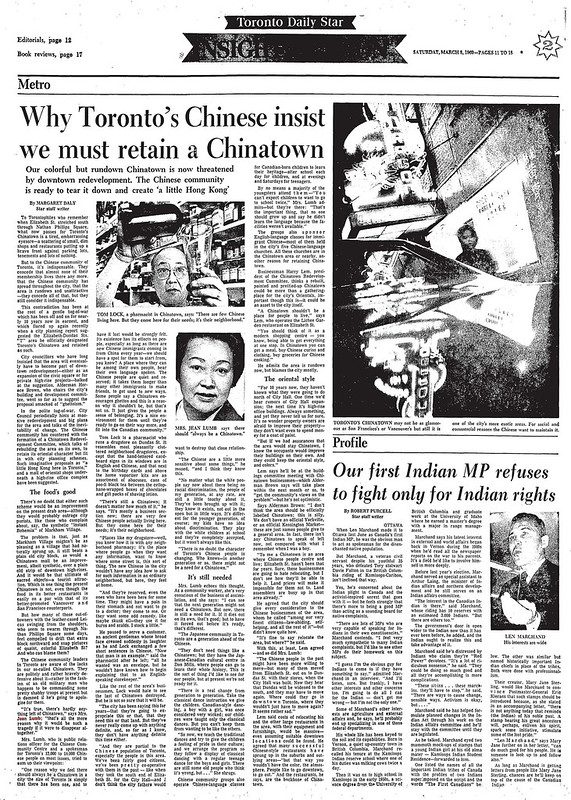 The article from which Jean Lumb’s defense of maintaining a Chinatown was quoted from. 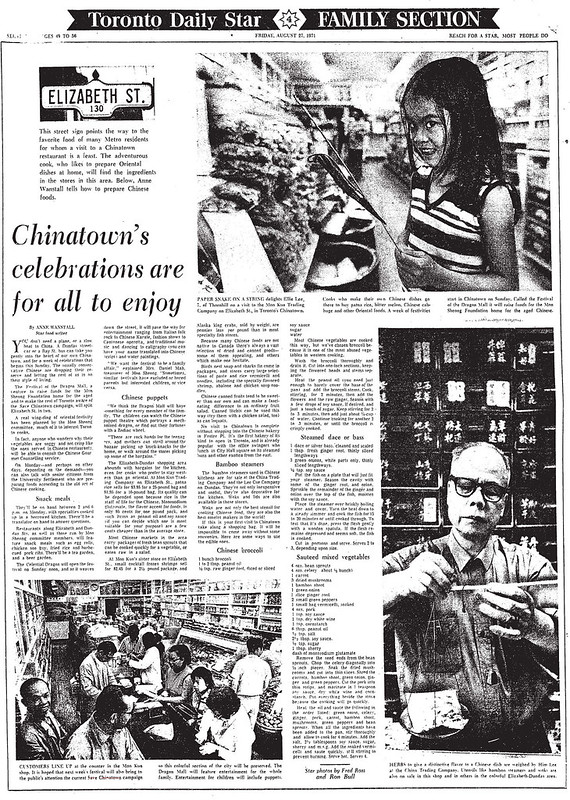 An early 1970s look at Old Chinatown, which discusses some of the remaining businesses, the Dragon Mall pedestrian zone, and several recipes inspired by local grocers. 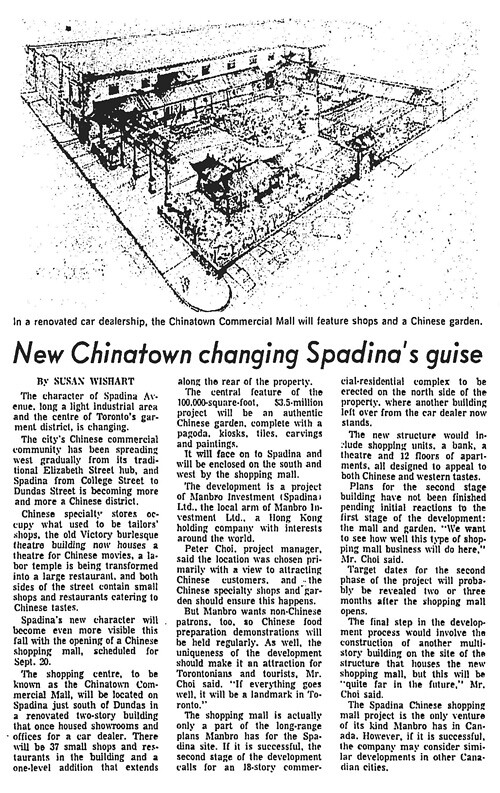 One of the first major projects as Spadina became the heart of downtown’s Chinatown was China Court, which opened in August 1976. Within a decade, it was razed for the cold concrete of Chinatown Centre. 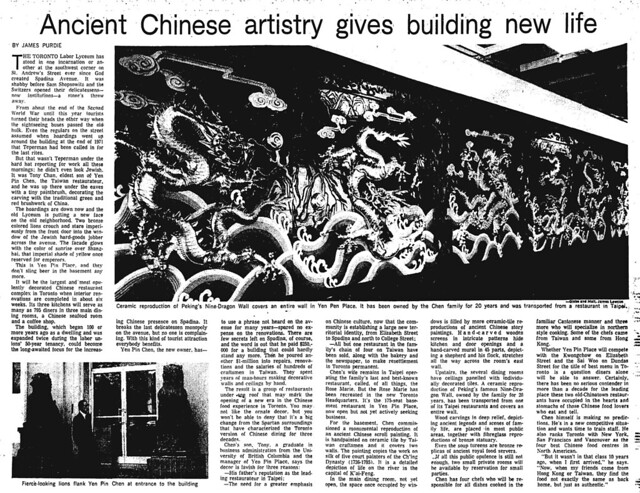 The building at 346 Spadina Avenue has gone through numerous incarnations, from the Labor Lyceum, to a series of Asian restaurants beginning with Yen Pin Place.

The Star’s coverage of a testy meeting in Agincourt, and reaction from readers. The paper also published an editorial criticizing attendees for their remarks, observing that the parking issue was one Scarborough’s city council was attempting to fix.

A few weeks later, meeting chairman Dr. Douglas Hood defended his actions, claiming that coverage was a smear job which took several remarks out of context. Having covered community meetings over the years where the yahoos came out in full force, and reading about similar meetings in the 905 belt a decade later, I’m tempted to lean toward the paper’s interpretation of events.