Before diving into this post, read my TVO article on victory gardening in Ontario during the Second World War.

The Citizen‘s “Uncle Ray” urged children to participate in victory gardening from early 1942 on. Subsequent columns included kids who “enlisted” in the Uncle Ray Garden Brigade, along with tips on what to grow.

Not going to lie – my juvenile potty humour kicked in when I saw this series of ads for a downtown Windsor gardening needs supplier.

Before diving into this post, read my article for TVO about the celebrations and controversies surrounding Peace Day in July 1919. This also marks the 500th post on Tales of Toronto (though this entry isn’t strictly a Toronto story…).

The Treaty of Versailles 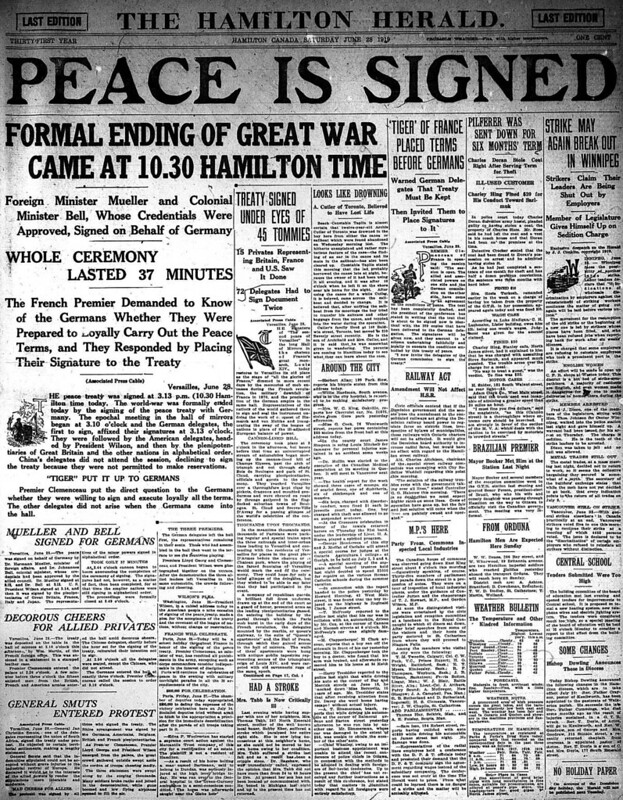 Eaton’s ad inspired by the signing of the Treaty of Versailles, Toronto Times, June 28, 1919. 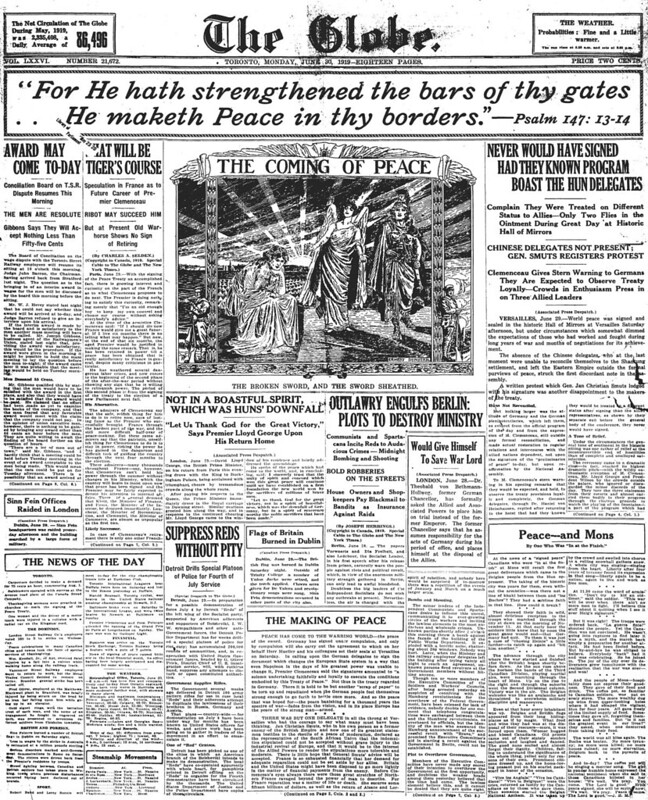 To Celebrate Peace Day or Not?

In several communities across the province, the question was whether to devote their full efforts towards peace celebrations planned for the August civic holiday weekend, or quickly come up with festivities to placate veterans groups and die-hard imperialists.

In Peterborough, the front page of the July 18, 1919 Evening Examiner was filled with notices from retailers who would close. The decision to honour the holiday didn’t come until a meeting of local merchants wrapped up late that afternoon. “The only exception,” the paper reported, “will be the butchers who will close at noon owing to the hot weather and the necessity of supplying the public with a fresh supply of meat.” Peterborough’s factories also agreed to close on Peace Day.

As merchant Dickson Hall put it, “it is a scandal to remain open, contrary to the wishes of the King and the people.”

Peace Day preparations were a mess in Windsor and the surrounding “Border Cities” (which included Ford City, Riverside, Sandwich, and Walkerville). “The attitude adopted by the Great War Veterans to have a parade and celebration has somewhat upset the calculations of those who expected to see the day pass quietly and unobserved,” the Border Cities Star reported on July 18. “The fact that organized labour also has decided to ‘take a holiday’ has added to the general confusion.” The Star believed that talk of punishing merchants who stayed open would “simmer out.” Merchants decided to take a half-holiday, shutting their doors at 1 p.m.

In the end, Windsorites preferred a quiet day. Many relaxed along the Detroit River or headed to Bob-Lo Island amusement park. Anyone who wanted to party could have travelled to large celebrations in Leamington and Tilbury. A veterans parade fizzled out, prompting at least one GWVA member to warn that Windsor’s lukewarm embrace of the GWVA’s vision of Peace Day would cause the Border Cities to lose out on future veteran conventions.

A rebuttal to the Herald‘s claims from the front page of the July 18, 1919 edition of the Hamilton Spectator.

If the festivities planned for Hamilton weren’t enticing, one could have taken advantage of Toronto’s celebrations, as shown in this July 17, 1919 ad from the Spectator.

Peace Day along The Danforth 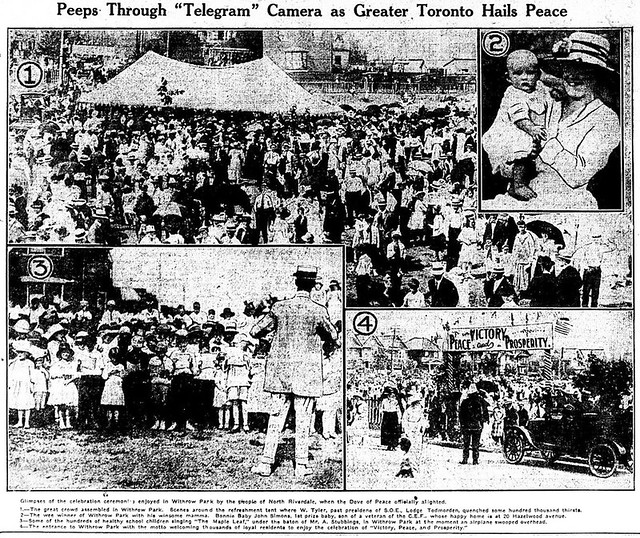 In Toronto’s east end, the main Peace Day celebrations took place along Danforth Avenue. A parade was held between Broadview Avenue and Withrow Park, where around 70,000 people enjoyed the festivities.

Members of the Todmorden lodge of the Sons of England volunteered to provide refreshments in the park. Numbers published in the Toronto World indicated that the lodge sold over 7,200 soft drinks and 250 gallons of ice cream, bringing in over $1,000. 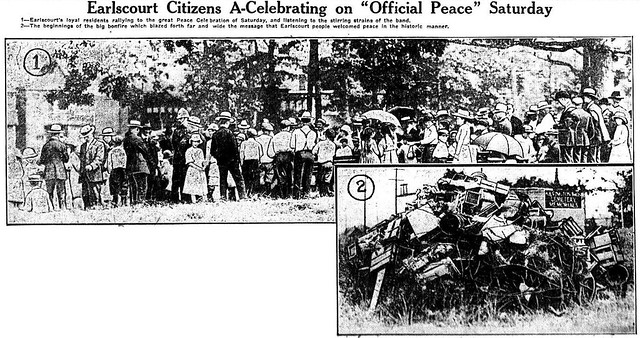 For more on events in Earlscourt, check out this post on McRoberts Avenue.

Piecing together the accounts of the rowdyism and violence which occurred in Toronto was like putting together a jigsaw puzzle, with each paper having its own set of details. Here are the full stories.

Originally published on Torontoist on July 16, 2009.

We’ve heard a fair bit about the state of Toronto’s parks during the current municipal strike. Most tales have tended toward the negative, from fears of contamination stemming from temporary garbage depots to the unattractive aesthetic state that some green spaces have fallen into. But what if the withholding of certain services led to a positive effect on the local environment?
Over the course of the fourteen-week CUPE strike in Windsor, the lack of grooming at many of the city’s parks has resulted in new swaths of grassland meadows, where wildflowers, birds, and insects have quickly settled. While the initial stages of the transformation drew angry responses from Windsor residents, both the city and the local media are receiving positive feedback about the naturalization effect. Birdwatchers are enjoying the opportunity to observe grassland species like bobolinks that have rarely been seen in Windsor in recent years, while other residents have praised the experience of walking by and hearing the hissing of tall grasses.
Broken City Lab, a group of artists/community activists, took a look at several of the naturalized sites and developed signage to highlight the new wilderness areas, as signs seem to formalize the presence of these locations. The first, shown above, was erected this week near the approach to the Ambassador Bridge. According to Broken City Lab Research Director Justin Langlois, the group hopes that placing these signs “might encourage someone walking by to look at these accidental meadows for what they are—a wonderful addition to the landscape—rather than such a politically charged issue.”
As for the fate of the signs once the strike ends? According to Langlois,

It’d be great for them to come down and for areas just to remain in their current state, but I’m not sure how well that would be read in the city. The University of Windsor had a similar problem where they created a berm around their football field stadium and planted trees on the berm. The grounds maintenance crew didn’t want to try to cut the berm, due to the incline, much less while zipping around trees, so they inadvertently created a naturalized area. The community responded with a number of comments to the effect of, “It looks messy,” so the University erected a large green sign that reads in white letters, Naturalized Area. It’s kind of funny that it takes a sign to make it all okay, but that’s part of what made us do this project, this question about would a simple 8.5″ x11″ sign make this naturalized area acceptable, would it momentarily diffuse whatever is politically charged when looking at it otherwise?

Windsor residents may continue to enjoy several of the naturalized areas in the long run. The city parks department has announced that once the strike ends, the city is considering leaving up to two hundred acres in large, open parks in their newfound state.

Long term, the 2009 municipal strike in Toronto helped pave the way for Rob Ford to become mayor. Polling afterwards showed a majority of Torontonians felt Miller mishandled the strike, a sentiment which may have played a role in his decision not to run for a third term in 2010.