Originally published on Torontoist on October 4, 2011.

If Tim Horton could run a donut shop, why couldn’t Bobby Orr lend his name to a pizzeria?

Orr may have skated into the pizza business to fend off others hoping to utilize his name in the restaurant business. Around the time the first pizzas were delivered in 1970, Orr’s representatives sent lawyers after other restaurateurs hoping to cash in on the Bruins star’s fame, such as two New Hampshire gentlemen who dreamed of opening Bobby Orr’s Eating Place locations throughout the granite state.

Before the first puck dropped for the 1971/72 season, Orr signed a five-year deal with the Bruins that, at $200,000 per season, made him the NHL’s first “million dollar man.” Besides leading the Bruins to a Stanley Cup victory, he picked up the Conn Smythe, Hart, and Norris trophies. We doubt any of that silverware made its way to the pizzerias for a special promotion. (“Buy two pizzas and win a chance to touch Bobby’s latest Norris Trophy!”) 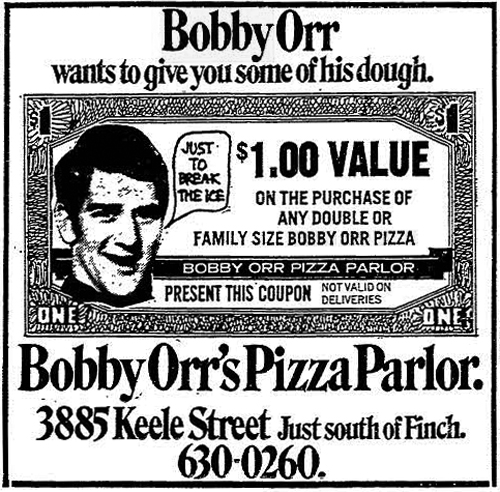 Known as either Bobby Orr Pizzerias, Bobby Orr’s Pizza Restaurants, or Bobby Orr’s Pizza Parlor, the chain planned to expand across Ontario, but the business endured as well as Orr’s infamously bad knees. An Oshawa newspaper ad hinted at the problem, proclaiming, “Bobby Orr wants to make a comeback,” after, as Star columnist Jeremy Brown put it, “a lapse in quality.” As for the former locations listed in today’s ad, the new one in Willowdale is now a salon/spa, the Keele store is currently a Mr. Sub, and the Cabbagetown branch is a real estate office.

Whatever name it carried, the chain appears to have come to an end in 1973, when Winnipeg-based owner Champs Food Systems sold the pizzerias to an unnamed buyer for $100,000. As part of the deal, Orr Enterprises withdrew the hockey star’s name from the restaurants.

In his book Power Play, Orr’s agent Alan Eagleson included a paragraph about the pizza business:

Oscar Grubert is a really successful restaurateur of the chain variety. He owns the rights to several of them, all big–Cavanaghs and Kentucky Fried Chicken in Winnipeg, Mother Tucker’s in other places. When his deal for Bobby Orr Pizza Places was launched in the Royal York Hotel, a lot of celebrities, from Pierre Berton to Robert Fulford, were on hand, as well as all the sportswriters. The fanfare was for a new Bobby Orr Pizza Place to open in Oshawa. Oscar set them up and they did well, except Bobby didn’t want to have anything to do with them. He’d say “I never eat this stuff,” that type of thing, and wouldn’t go to an opening. So Oscar finally said, “We might as well get out of that deal.” If Bobby had co-operated he’d be making hundreds of thousands of dollars from that business now, but he just kissed off an association that could have been a long-time money-winner for him.

Or one that Eagleson probably would have benefited more from than Orr. In a 1993 Globe and Mail column on fact-checking, Robert Fulford disputed Eagleson’s account of the pizza chain’s launch night. “It’s nice to be called a celebrity,” Fulford noted, “but I’ve never been in the same room as Bobby Orr and never heard of Orr Pizza Places.”