Originally published as a gallery post by Torontoist on September 25, 2014 to mark the Gladstone Hotel’s 125th anniversary.

As Toronto’s oldest continuously operating hotel, the Gladstone Hotel has seen much over its 125 years. When the doors first opened in 1889, it was a place for travelling businessmen to rest and for local athletic and social clubs to gather. Its proximity to Exhibition Place made it ideal for visitors and exhibitors. Through the late 20th century its reputation diminished, reflecting the economic and social decline of Parkdale to the west. But although it came to be perceived as a flophouse, it offered a sense of community to patrons and residents, giving them a place to relax with a drink and a bit of country music.

Over the last two decades the Gladstone has reawakened, becoming one of the city’s major cultural hubs as the neighbourhood around it has transformed. “Gladstone Hotel now stands as an epicentre of cultural incubation in Toronto’s west end, fostering creativity and community in everything it does,” its website notes. “Renowned for twisting perceptions and giving canvas to underrepresented and marginalized groups, Gladstone Hotel aims to raise the profile of subcultures and subvert the mainstream, creating a unique and open-armed narrative around its historic stature.” Art installations, burlesque, dancing, dining events, music, theatre, trivia nights, and many other forms of entertainment have found a place within its walls.

The current Gladstone Hotel is the second building at the northeast corner of Queen and Gladstone bearing that name. The first, constructed in 1879, aroused the wrath of councillors in neighbouring Parkdale (then an independent municipality), who tried to block its liquor license. Originally known as Brady’s Hotel, it became the Gladstone in 1880 after the Robinson family purchased it. Proprietor Susanna Robinson was a widow with 13 children whose late husband had run hotels in Kleinburg and Yorkville. An 1887 advertisement offered guests the “finest brands of wines, liquors, and cigars,” plus Guinness Stout. James Britton might have required several pints after he lost to William McMurrich in the 1881 municipal election. 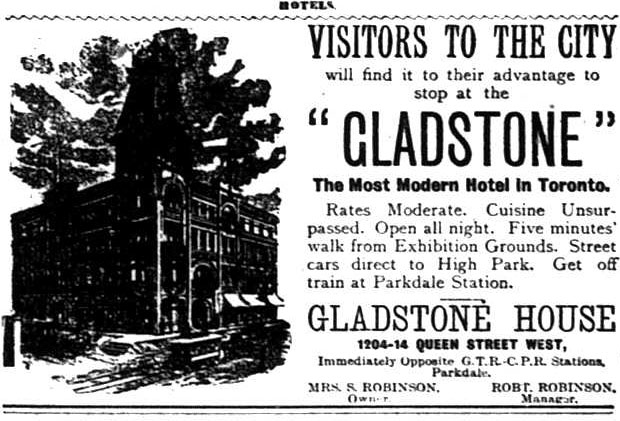 Designed by architect George M. Miller, whose other works included the chapel at Wycliffe College, the second Gladstone Hotel opened in 1889. As Toronto Life observed over a century later, “the hotel aped the style of the time, a graceful, if unremarkable, Richardsonian Romanesque of red brick, arched passageways and gargoyles in stone relief.” A cupola located on its southwest corner was removed in the 1940s. 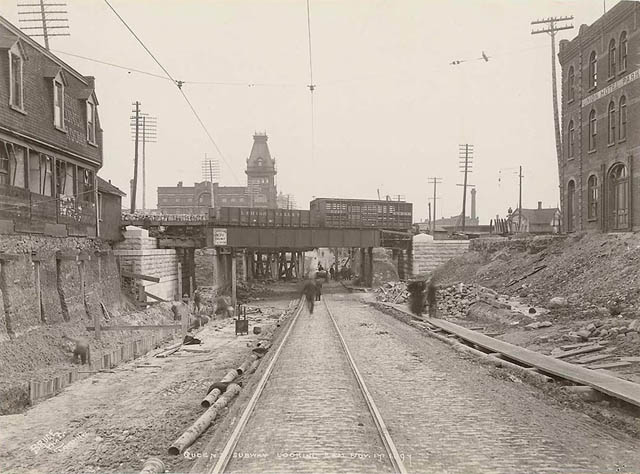 The hotel’s location across Queen Street from the Parkdale railway station helped business in the early days, as did its proximity to the Toronto Industrial Exhibition (the forerunner of the CNE). It provided a comfortable base for fair exhibitors and military performers. “The most striking feature about the hotel,” the Globe observed in 1904, “is the absolute cleanliness and neatness which is to be observed in each and all of its departments, whether in the collars, parlors, or dining rooms.” During the 1905 fair a full floor was occupied by 40 members of the Irish Guards, whose presence was honoured with a commemorative light display on the front of the hotel.

During extensive renovations made by owner Turnbull Smith an electric Otis elevator was installed in August 1905. Covered up for years, it was rediscovered during 21st century renovations when a hole was knocked in the wall. Refurbishing took nine months. Longtime regular Hank Young (1941-2009) was hired to operate the elevator upon its return to service. Known as the “Gladstone Cowboy,” Young first sang in the hotel as part of a country band in 1961, and eventually became a karaoke fixture known for his rendition of “Hey Good Lookin’.” Christina Zeidler felt his hiring was “a match made in heaven…He was a great storyteller.” Young was contractually obligated to wear outfits drawn from his collection of cowboy boots, hats, and bolo ties. 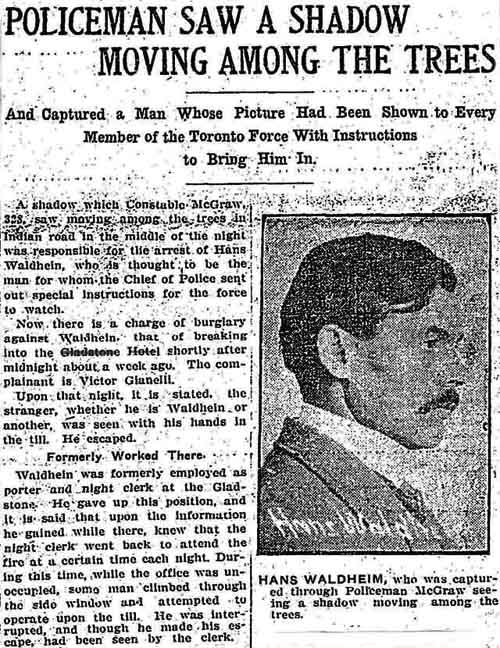 Hans Waldheim (as spelled in accounts other than the one above) had very itchy fingers. Reputedly related to Prussian nobility, he was sent to Kingston Penitentiary in 1904 for a string of break-and-enters in Toronto. Incarceration failed to curb his criminal tendencies, as outbreaks of minor burglaries accompanied his travels. Around 1910 he was employed by the Gladstone as a porter and night clerk. After leaving the hotel, he used his knowledge of nightly routines to plan the perfect time to empty the till—the moment the clerk went to attend the main floor fireplace. He almost got away with it in April 1911, but was noticed and fled. Waldheim was on the run for a week, until police caught him trying to break into a home on Indian Road during the early morning of April 28. During his hearing on May 29 he claimed he broke into the Gladstone to pay a fine, fully intending to refund the stolen cash. Magistrate Rupert Kingsford didn’t buy the sob story or his lawyer’s request deport Waldheim to his native Germany. Kingsford sent Waldheim back to Kingston Pen. 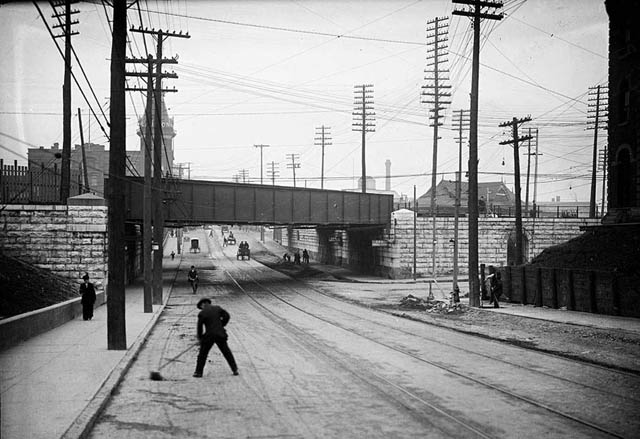 Queen Street subway east from Dufferin Street, April 22, 1915. The Gladstone Hotel is on the left, the Parkdale train station on the right. City of Toronto Archives, Fonds 1231, Item 1409.

Disaster nearly struck when a fire forced 75 guests and boarders to evacuate the hotel on January 17, 1918. The blaze began in a rubbish heap in the basement underneath the kitchen. A night watchman called the fire in just before 5 a.m. When firefighters under the guidance of fire chief Duncan McLean arrived, the hotel was filled with smoke. That fatalities were avoid was thanks to swift thinking 20-year-old Union Station employee Stanley Condy. He was preparing to go to sleep when he heard someone yell “fire!” He ran to each floor, opening fire windows and guiding groggy guests to escape routes. “With a handkerchief over his mouth to prevent him from swallowing the smoke,” the Star reported, “he worked like a little hero running the elevator up and down till he was overcome by smoke and had to give up his task and seek fresh air.” McLean praised the calm evacuation. “There was absolutely no panic and everyone did the right thing at the right time,” he told the Telegram.

The Gladstone’s decline was long and slow. By the mid-1980s, most of its permanent residents were cabbies, pensioners, or truckers. “They are not necessarily down-and-out,” a Globe and Mail feature on the city’s hotel residents observed in 1985, “but they clearly march to a different drummer.” Regular patrons drank in the Melody Bar or caught country acts at Bronco’s (the current ballroom space). By the 1990s, the Art Bar offered space for performers and weekly drawing classes. Observers wondered how long it would be before the creep of gentrification westward along Queen Street would hit the Gladstone.

The nightly rooms are on the lowest floor. I put my shoulder to the door that’s stuck on a lump of filthy shag carpet. Big ridges under the rug make walking on it precarious. This $49.25 room has a double bed, bath, TV and a phone to the front desk. It overlooks a roof covered in glass shards and the Price Chopper parking lot. It’s not a bad room, but the dispute between the hotel owners has prevented investment in upgrading. I have to pull the door hard to close it. This brings an all-swearing condemnation of door-slamming from an unseen neighbour.

In late 2000, after a bitter sibling rivalry resulting in death threats, longtime owners Allan and Herb Appleby sold the Gladstone. The new owners were Michael Tippin (who specialized in heritage renovation projects) and the Zeidler family. Plans called for the number of rooms to be downsized during renovations, and new programming catering to an artsier crowd a la New York’s Hotel Chelsea. Relations between the partners quickly soured. The low point may have been Tippin’s decision in February 2002 to send in security to lay off staff and evict the remaining long-term residents. Police mediation resulted after Margie Zeidler arrived to support those getting the boot. After legal battles and a bout with receivership, the Zeidlers were awarded full ownership in late 2002. The residents stayed on for two more years, then were offered assistance (including several days of free rent) in finding new homes elsewhere when the pace of renovations increased. The documentary Last Call at the Gladstone Hotel captured the changes during this period, as management juggled the needs of longtime regulars with a newer, younger, artier clientele.

Management of the hotel passed on to filmmaker Christina Zeidler. The slow pace of renovations picked up as the hotel’s infrastructure succumbed to years of neglect. “We wanted to keep as much of the original building as possible,” Zeidler told the Star in 2005. “But the place was on its last legs. We had to redo everything—mechanical, electrical, floors and walls. Every time we started one job, we’d find more work that needed to be done.” Thirty-seven artists were hired to make over the guest rooms into individual works of creativity. A December 2005 gala served as the official relaunch.

A longtime Gladstone tradition which wound down in 2014 was weekend karaoke in the Melody Bar. Hosted for nearly 15 years by Peter Styles, the chance to sing your heart out provide a venue for different generations of patrons to mingle. “Character types (Parkdale elders, skinny Queen West aesthetes and tables of birthday partiers) who normally wouldn’t be within the same three-block radius all manage to cohabit an irony-free zone where everyone fights for the mike and four minutes of fame,” Toronto Life observed in 2003. Among the props Styles used was an applause sign, which he felt helped those onstage. “The best thing to do is encourage energy in the audience for the singer,” he told the Star in 2012, “and of course they give it back.” A pipe burst during the intense cold of January 2014 wrecked the room’s audio equipment and soundproofing, which management saw as a sign it might be time to bid karaoke adieu.

In early 2020 the Gladstone was sold to Streetcar Developments, whose other historical projects have include the Broadview Hotel and the Distillery District. 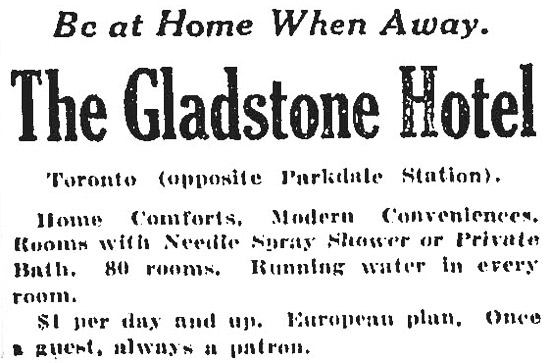