For no particular reason other than it’s the holiday season (and the scanned pages of historical newspaper microfilm on Google News are working properly again), here are a few seasonal stories taken from the Toronto Daily Mail 130 years ago.

The pre-Christmas edition of the Woman’s Kingdom page had several holiday-related items, starting with general thoughts about the occasion.

(Aside: the following year, Woman’s Kingdom was taken over by pioneering female journalist Kit Coleman)

There were suggestions on what to have for Christmas dinner:

There was also a poem about mince pies:

The strangest item on the page was this story about women’s toes:

On Christmas Eve, the Mail published the tale of a lonely boarder, residing by themselves in the city far away from loved ones, who decided to take in a vagrant for some holiday cheer. The result, if it had happened in 2018, would be a headline on the 11 o’clock news. 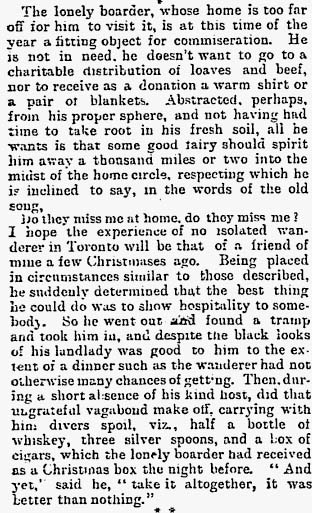 Finally, a few stories published in the Christmas Day edition of the paper. It seems odd that the man who was taken in for a crime he was immediately cleared of still had to pay bail. Also note the hordes of last-minute Christmas shoppers in downtown Toronto.