As Halloween approaches, we are surrounded by images of death. Most focus on the ghoulish aspects, from bony skeletons to creepy tombstones with punny names for the deceased. But the mock graveyards decorating residential lawns bear little resemblance to Toronto’s real cemeteries. Instead of depressing, scary final resting places, these spaces are full of life.

During the Halloween seasons in 2011 and 2012, I wrote a series of articles for Torontoist on the city’s cemeteries. This year I’m mixing those pieces with updates and new stories. This piece was originally published on Torontoist on October 27, 2011.

Mount Pleasant Cemetery is much more than a burial spot for a century’s worth of Toronto elites. Beyond its historic tombs, it serves as one of North Toronto’s major parks, suitable for a leisurely run or quiet contemplation. The grounds act as an arboretum preserving a wide variety of tree species. A walk from the oldest to newest sections traces Toronto’s evolution from Anglo-Saxon stronghold to multicultural city. You could spend days uncovering Mount Pleasant’s many gems, from surveying the personal mementos inside the main mausoleum to reading epitaphs that ask a simple question: “Well, now what?” 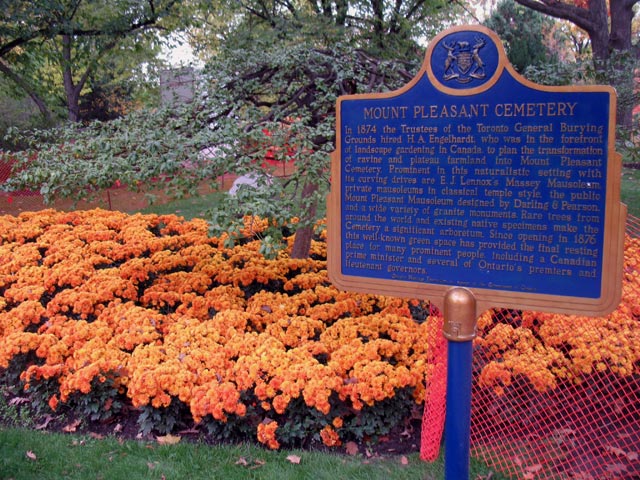 To forestall overcrowding at the Necropolis, the Toronto Burying Grounds Trust purchased a 200-acre farm on Yonge Street in 1873. Designer Henry Engelhardt’s layout was inspired by the park-like graveyards emerging in American cities. The early appearance of Mount Pleasant was described in the cemetery’s 1876 rule book:

Commodious and inviting foot-paths wind around every hill, and explore each dale and shady nook, whence crystal springs bubble forth into beautiful streams. The waters of Spring Creek have been dammed up in several places, and Cascades, Lakes and Ponds have been formed with rustic bridges leading over them; and what was once a rough and impassable ravine bears now the impress of art, and can be visited by persons either in carriages or on foot.

Among the first burials were the remaining unclaimed remains from the Potter’s Field cemetery at Bloor and Yonge, which had officially closed 20 years earlier. When the cemetery officially opened on November 4, 1876, the Globe called Mount Pleasant “a quiet resting place for the people’s dead.” Among the early rules: tickets were required for entry; children had to be accompanied by adults; horses were allowed by special permit only; carriage drivers had to remain in their coach seats during funeral services; burials were not permitted on Sunday unless a doctor determined that the person being placed in the ground had a communicable disease; and no bathing, dogs, fishing, picnics, skating, smoking, or washing were allowed.

The cemetery is divided by Mount Pleasant Road—to get from one side to the other, we recommend taking the underpass on the north side. The older western section is where you’ll find the earliest burials, main mausoleum, grand tombs, and most of the recognizable names. The eastern portion includes the Garden of Remembrance, scattering grounds, and, especially as you approach Bayview Avenue, a better representation of the multicultural diversity of present-day Toronto. The winding roads are part of the Belt Line trail and attract plenty of cyclists, joggers, and runners. 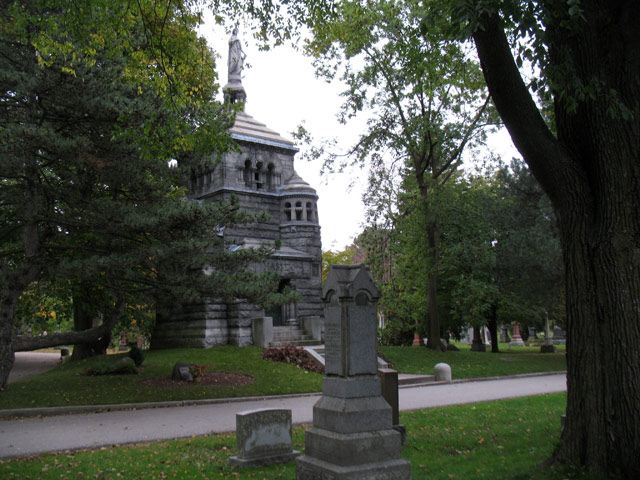 It’s easier to list off who isn’t buried in Mount Pleasant than who is. Pick up a copy of Mike Filey’s book Mount Pleasant Cemetery: An Illustrated Guide for a comprehensive who’s who of the cemetery’s permanent residents. Memorials that we suspect are among the most visited are those for Frederick Banting, Charles Best, war hero Billy Barker, the Eaton family, Glenn Gould, Foster Hewitt, Punch Imlach, William Lyon Mackenzie King, and the Massey family (whose mausoleum was designed by Old City Hall architect E.J. Lennox).

The Garden of Remembrance and its neighbouring wooded trail provide a relaxing atmosphere to rest and reflect. On the day of our photo shoot, we noticed a man quietly working on his computer while sitting next to the fountain pond.

For over-the-top absurdity, it’s hard to beat the ego-driven monument to Knob Hill Farms founder and onetime Maple Leafs owner Steve Stavro that greets visitors to the western section as they enter from Mount Pleasant Road. There’s some self-inflation at work in depicting yourself as a classical emperor wearing a laurel-leaf crown, with a pack of lions standing guard. Top it off with a statue of Alexander the Great on horseback, and you’re left with a memorial that might cause business titans of old, like the Eatons and Masseys, to turn in their graves.

Additional material from Rules and Regulations of the Mount Pleasant Cemetery (Toronto: Toronto Burying Grounds Trust, 1876) and the November 6, 1876 edition of the Globe.

Report from the November 6, 1876 edition of The Globe. The paper also printed the trustees’ report, which summed up the historical path to the creation of Mount Pleasant Cemetery.

While I can’t track down my original set of photos from 2011, it appears this one was left on the cutting room floor. This memorial to the Cutten family was sculpted by Emanuel Hahn, who was also responsible for statues of Ned Hanlan at Exhibition Place and Sir Adam Beck along University Avenue.

This installment of my Ghost City column for The Grid was originally published on November 13, 2012.

Over 75 years after the first cash register rolled off the line at the National Cash Register (NCR) plant at Dundas Street West and Landsdowne Avenue, the bells are still ringing. The shell of classic industrial architecture seems appropriate for the warehouse-style grocers who have taken advantage of the building’s ample room for refrigeration, storage, and merchandising since the mid-1970s. 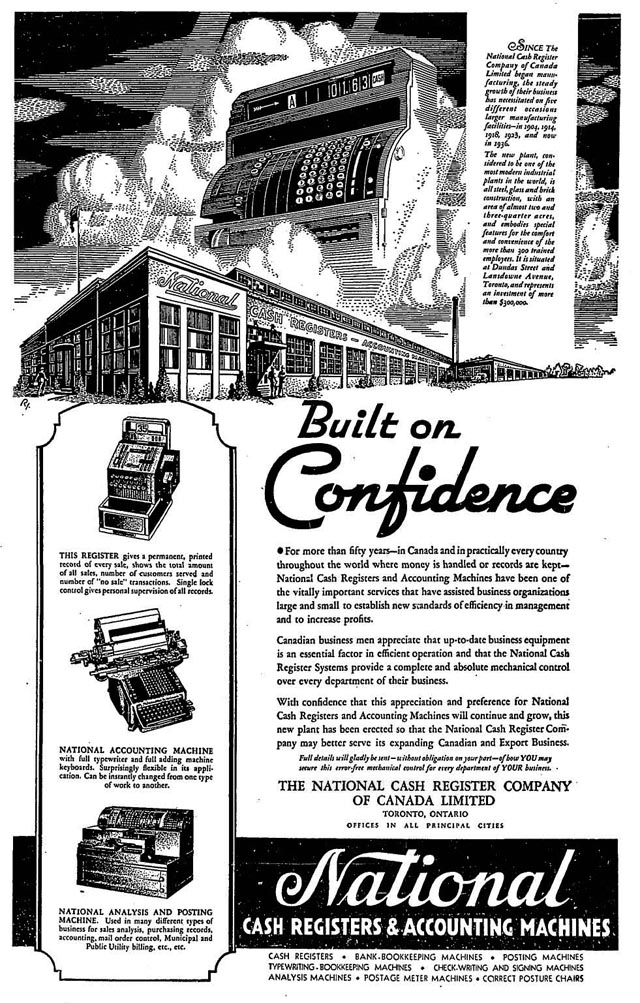 Before NCR purchased the property during the mid-1930s, site occupants included the original home of St. Helen’s Roman Catholic Church (which moved a block east) and, during World War I, army barracks. On November 27, 1935, Canadian Manufacturers’ Association president W.S. Morden turned the sod for the $300,000 plant. Opened in June 1936, the 75,000 square-foot facility included a machine shop, assembly area, and stock department. It was intended to supply cash registers and other business machines to Canada and the rest of the British Empire. The yellow-bricked Art Moderne façade was designed by architect Thomas E. Muirhead, whose other works included the Kenson Apartments on Grosvenor Street. The Star noted that the plant offered employees “comfortable working conditions and lighting of the most modern kind.” NCR also provided a generous Christmas bonus—employees who had worked more than three months for the company by the end of 1936 received $25, with an extra buck per year of service. The company’s growth prompted two additions built between 1947 and 1950.

The site switched from building cash registers to utilizing them when Knob Hill Farms bought the building in the mid-1970s to serve as its first warehouse-style “food terminal” location within the City of Toronto. Customers could watch trucks unload fresh goods in the middle of the produce department and butchers practise the fine craft of meat-cutting. “I don’t like to do things behind closed doors,” noted chain proprietor Steve Stavro. “I want the customers to see everything and feel part of it. If you’re selling proper merchandise, you should have nothing to hide.” Among the perks the store offered were late shopping hours and a courtyard statue of Neptune Stavro imported from Italy. It wasn’t the prettiest store, but it offered affordable prices and a deeper selection of multicultural foods than other chains.

Knob Hill Farms was packed from the moment it opened in September 1975. The 200-space parking lot barely coped with the 50,000 customers who filed through during the store’s first week. The store easily absorbed the $25 fines it received for violating the Lord’s Day Act by staying open on Sundays. Stavro felt it was the only day of the week many of his customers could grocery shop, a position still vindicated by the long lines seen at any supermarket on an average Sunday. The combination of weak financial penalties and traffic jams led Toronto city councillor Tony O’Donohue to call for tougher bylaws on Sunday openings if Queen’s Park didn’t enact promised legislation surrounding the issue. The province soon passed new Sunday opening laws that resulted in Knob Hill Farms, along with other non-convenience-store food purveyors, locking its doors during the official day of rest. Not until 1992 did the store open on Sunday without worrying about fines.

After a quarter-century run, the store closed along with the rest of the Knob Hill Farms chain in 2000. Near the end, customers complained about wide pools of water streaming from aging refrigerators. The store sat vacant for several years, during which it was designated as a heritage property, before reopening as a No Frills, which provided a modernized take on Knob Hill’s low-cost warehouse concept.