Originally published on Torontoist on August 26, 2015.

Before reading this column any further, grab the nearest pack of coloured pencils, crayons, or markers, or open up your favourite digital art program. Have we got a colouring bonanza for you!

Long before adult colouring books topped the Amazon charts, there was the humble colouring contest. It was a simple gimmick: draw interest in your brand, event, publication, or store by reeling in kids with promises of prizes if they applied their artistic skills (or lack thereof) to simple line drawings based on popular shows or seasonal icons. For their efforts, they might win pocket change, a bicycle, a chance to meet their idols, or bragging rights at the playground.

Today’s selection of ads spotlights past opportunities to dazzle judges with your colouring skill. Let your creativity run wild!

Click on any of the following images for larger versions. 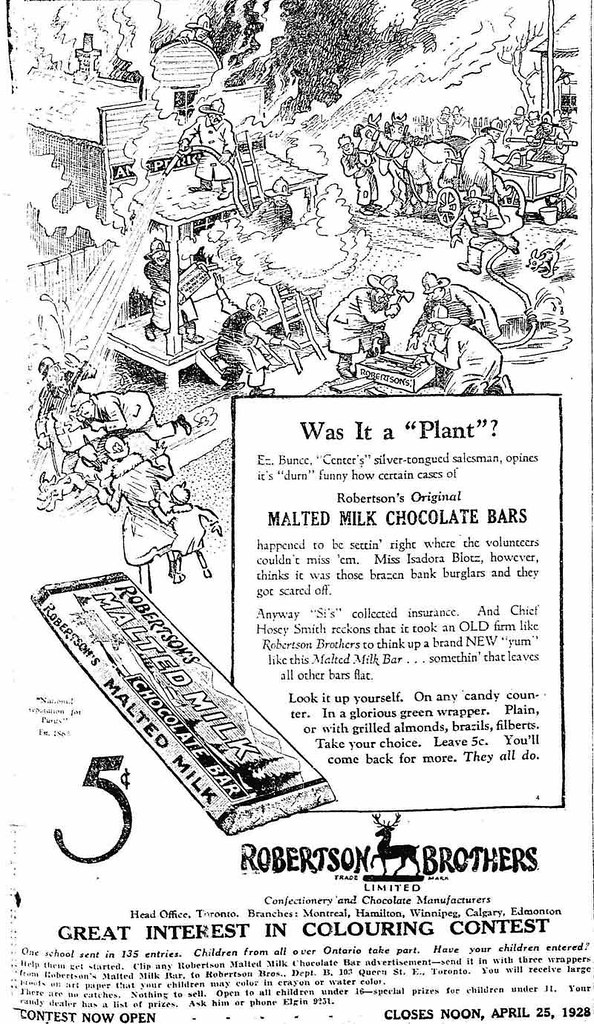 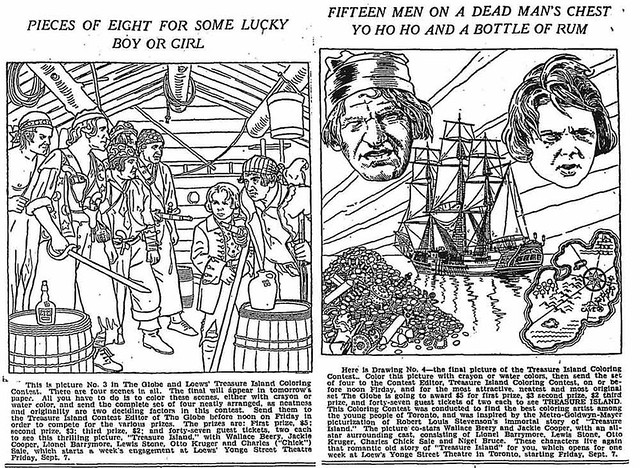 From the August 18, 1934 New York Times review of Treasure Island:

Although there are occasional studio interpolations, the present screen offering is a moderately satisfactory production. It has not the force or depth of the parent work and, kind as one might wish to be to the adaptation, it always seems synthetic. However, hitherto on the stage and in two silent films of the same subject, the role of Jim Hawkins has been acted by a girl. One is spared this weakness in this picture, for that able juvenile, Jackie Cooper, plays Jim, and, although he may not impress one as being the Jim of the book, he does fairly well. 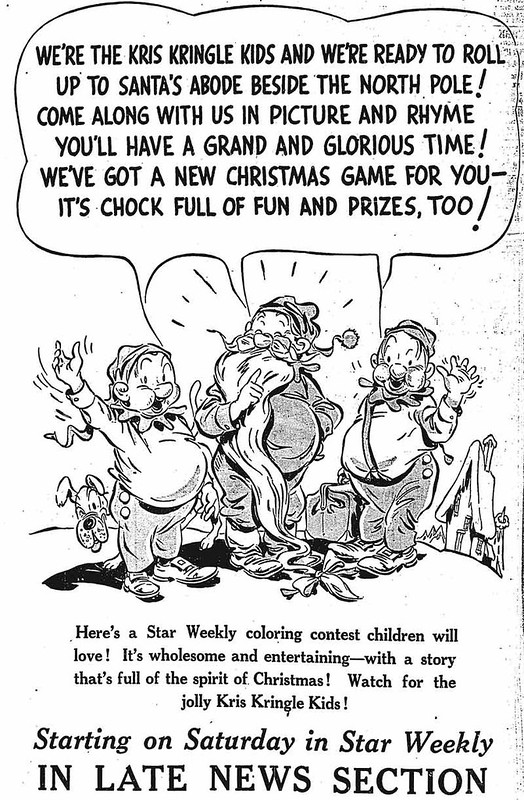 Christmas colouring contests have long been a holiday staple. In this case, they may have also provided a boost to the Star’s sister publication, Star Weekly. 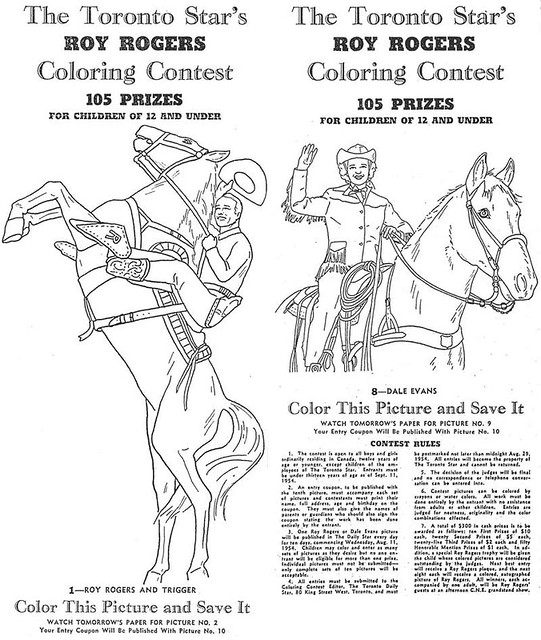 Forget the beautiful statue of the “King of the Cowboys” riding his trusty horse Trigger; the real thrill for most winners would have been spending a few moments with Roy and Dale at the 1954 CNE. A photo published in the Star of 11-year-old victors John Goslinga and Alfred Kemp depicted them in full cowboy regalia, as if they were ready to be extras in one of Roy’s horse operas. 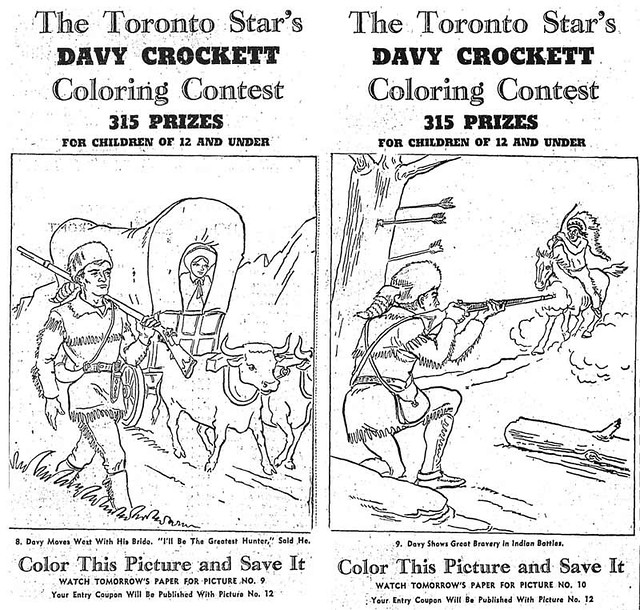 A year after the Roy Rogers contest, the Star capitalized on the success of Davy Crockett. Note flattering depictions of aboriginals and women. 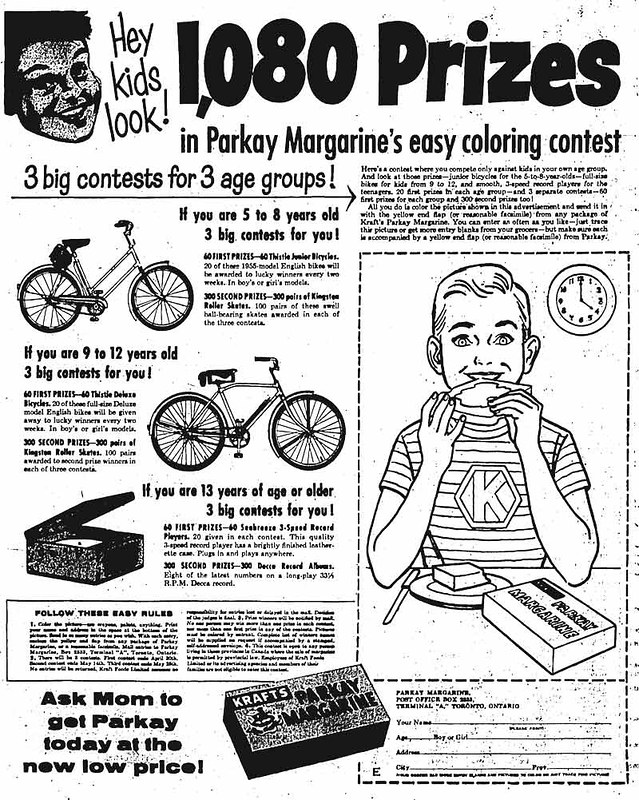 Faster than a bicycle going downhill! More powerful than a butter churn! Spreads margarine on toast with a single stroke! It’s a bird, it’s a plane…it’s PARKAYBOY! 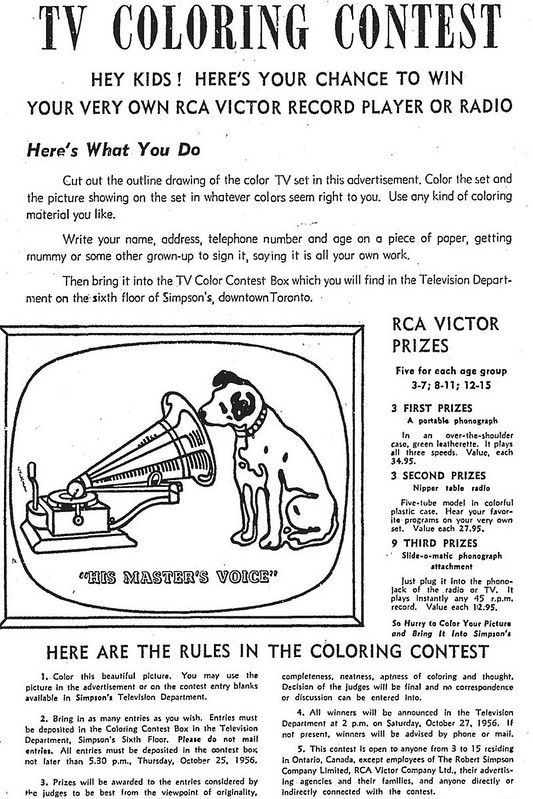 Simpsons gets in on the colouring contest action with RCA Victor’s venerable mascot, Nipper. 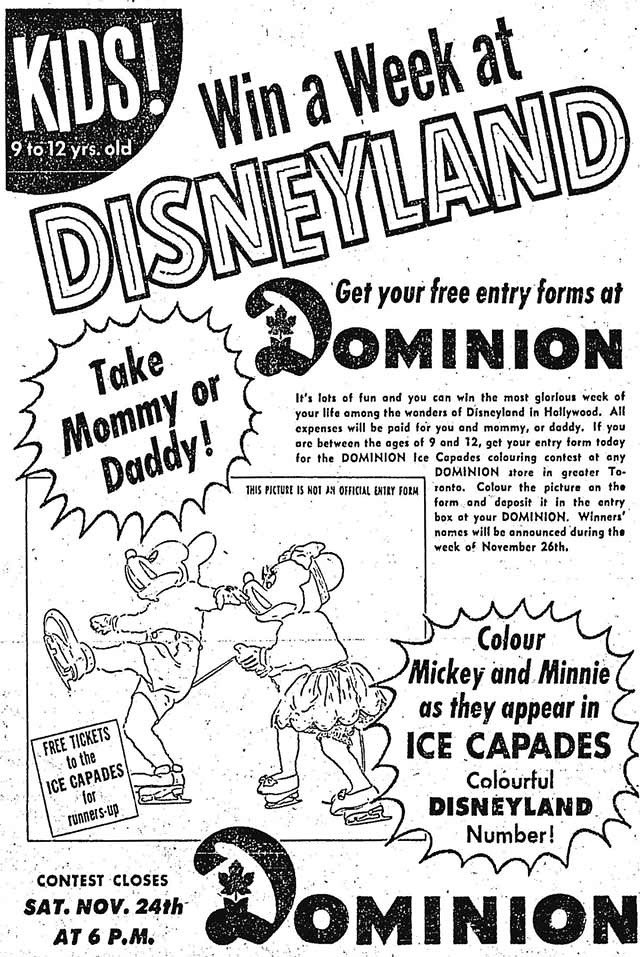 We (and Disney’s lawyers) can only hope that the actual drawing of Mickey and Minnie used for Dominion’s Ice Capades tie-in was superior to this spartan sketch.

How terrfying can you make this clown?

A previous post covered the story of dinner with Chewbacca. 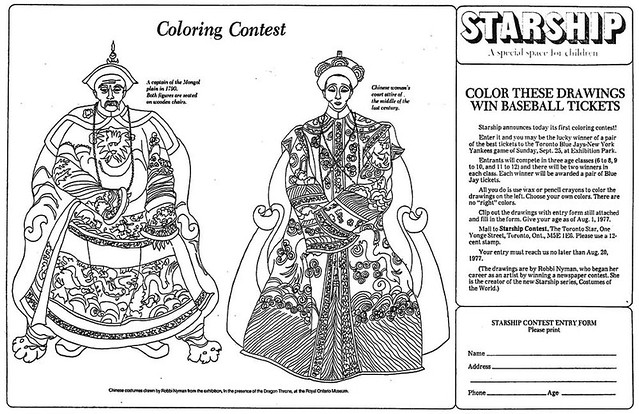 The Star’s kids page launched its first colouring contest with this detailed pair of figures who would have looked at home in the Royal Ontario Museum. A trip to the ROM might have been preferable to the grand prize: a chance to see the first-year Blue Jays drop both ends of a doubleheader against the New York Yankees. The first game was a 15-0 blowout, which saw future Jay Cliff Johnson hit two homers. The Yankees were gracious during the second match, with only a 2-0 victory. 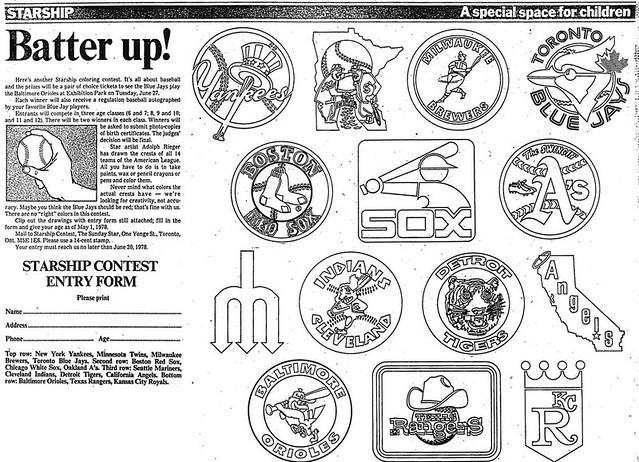 More colouring, more baseball, happier results for the Blue Jays. The prize winner saw the home team defeat the Orioles in another doubleheader by scores of 6-2 and 9-8. It was the franchise’s first doubleheader sweep at Exhibition Stadium. 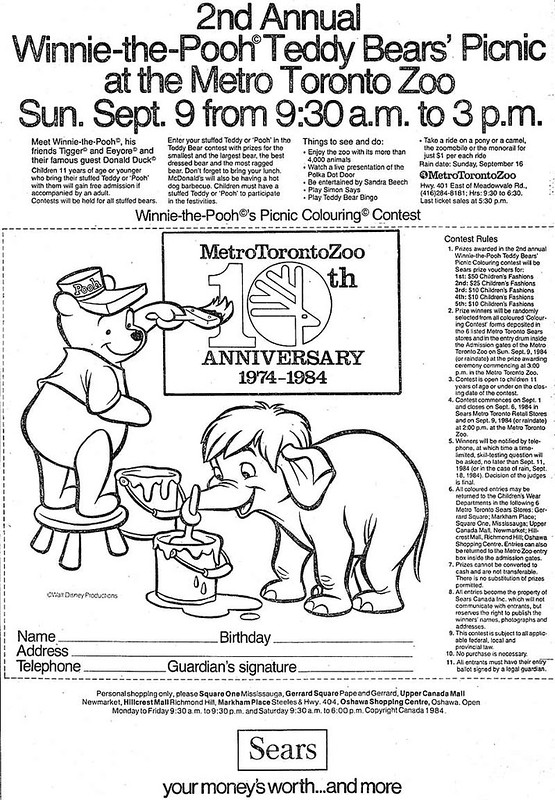 Who better to represent a teddy bear picnic at the Metro Zoo than Winnie the Pooh? We wonder if, a year or two later, the celebrity mascot would have been Teddy Ruxpin. 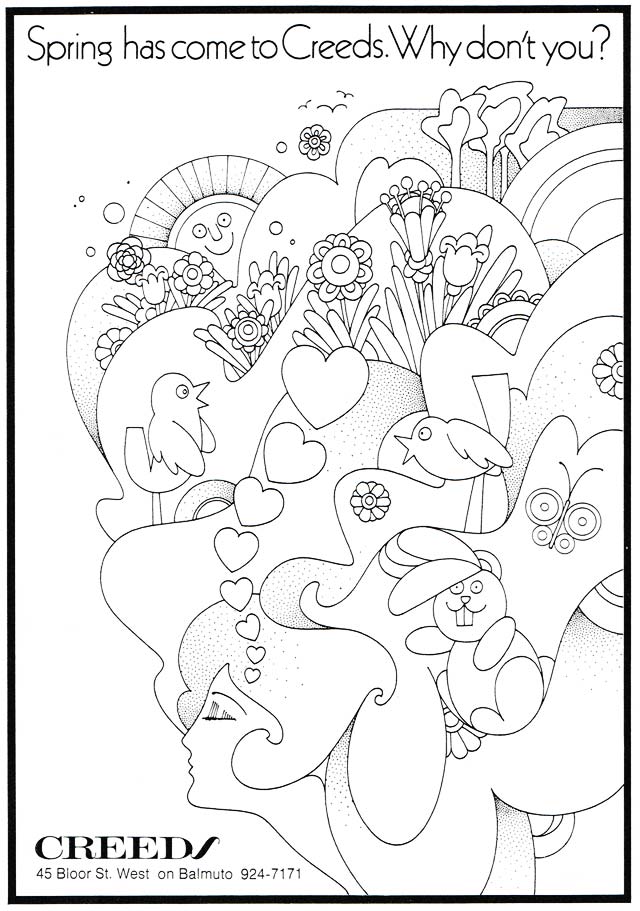 While not promoting a colouring contest, this ad for the fashionable Bloor Street clothier fits the mood of a modern adult colouring book. 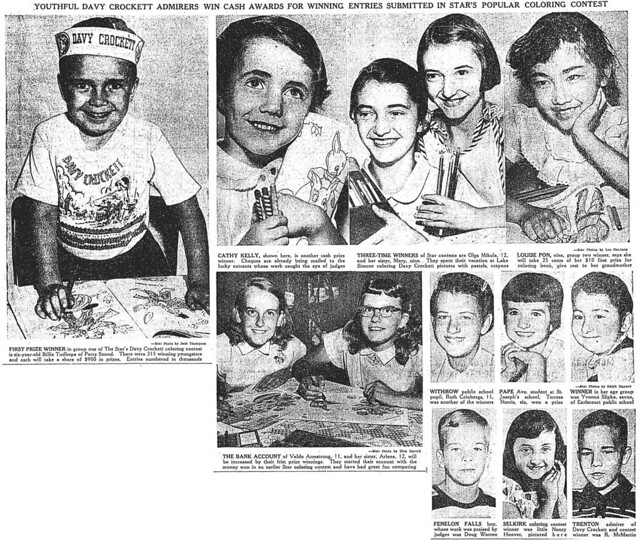 While the winners of the Star‘s Roy Rogers contest only received a small corner of a page, the winners of the paper’s Davy Crockett took up most of the front page of the second section. Sadly, none of them posed with series stars Fess Parker and Buddy Ebsen.

Originally published on Torontoist on July 6, 2010.

We wonder if the phones at the Toronto Sun were overwhelmed with calls from early Star Wars zealots incensed to discover that their beloved “wild wacky Wookie” (other articles couldn’t decide how many “e”s Chewbacca’s species required) was being compared to a carpet. Goofy writing didn’t deter the ten lucky winners who weren’t devoured by actor Peter Mayhew during dinner at the CN Tower. After seeing their picture with the costume-less giant printed in the Sun, contest victors who still hadn’t had their fill of Star Wars could still catch the movie at a handful of big screens around Metro Toronto where it had settled into a long run, including the Elane (at Eglinton and Danforth), Fairview Mall, Mt. Pleasant, and the Varsity.

Mayhew took a weekend off from his day job as an orderly in England to attend the Vantastic van show and dine with the contest winners. Columnist Sylvia Train was impressed with the sheer size of the seven-foot-plus visitor while lunching with him at the Courtyard Café (“One of my hands spread out fitted easily in his palm”). Show organizers had difficulty finding a hotel bed suitable for Mayhew’s frame until they finally located one at the Bristol Place, where he was quickly besieged with autograph requests from the staff and their families. When the limousine company hired for Mayhew discovered his claim to fame, they donated their services in exchange for a set of autographed pictures. When asked if he had been approached to reprise his role in “Star Wars II,” Mayhew responded: “They have offered me the part and though I haven’t accepted as yet, I’m sure I will.”

Additional material from the December 2, 1977 edition of the Toronto Sun.

Here are winners of the Sun‘s contest to have dinner with a wookiee, as presented in the December 2, 1977 edition of TO’s daily tabloid.

From the same edition, columnist Sylvia Train compares her size to Mayhew’s. As she succinctly put it, he was “really big.” Special note was note was made that “though he is large he’s perfectly proportioned,” so that readers wouldn’t worry about the man suffering from any size-related physical deformities (who wanted to talk acromegaly or other disorders in a fluffy entertainment column?).