Originally published on Torontoist on February 12, 2013. 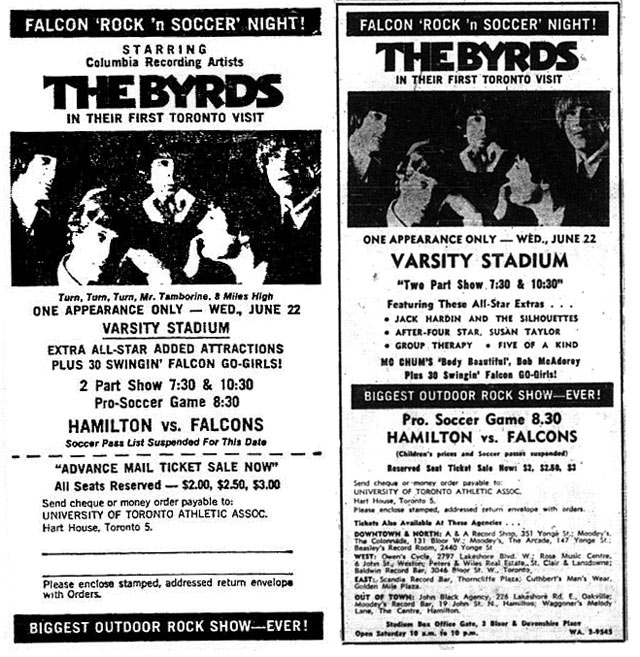 Joe Peters, president of the Toronto Italia Falcons soccer club, had a brilliant idea to raise the profile of the nascent professional sport among the city’s youth in the spring of 1966: marry a match to a rock concert. “We are introducing young people to soccer under conditions they understand,” he told the Telegram. To lure teens into Varsity Stadium for “Rock ‘n Soccer” on June 22, 1966, he booked one of the most controversial bands of the moment to headline.

It had been a rocky year for the Byrds. Singer Gene Clark departed the group in February 1966, because of a mixture of stress, fear of flying, and dissent within the band. Their next single, “Eight Miles High,” was banned by radio stations across North America because of suspected drug content. In Toronto, 1050 CHUM played the song for a week before station manager Allan Slaight pulled it “the minute we heard what it was supposed to refer to.”

The Star’s Robert Fulford interviewed students at Wilson Heights Junior High for their perspective on the lyrical content of “Eight Miles High” and similarly controversial songs. Fulford wasn’t convinced the Byrds depicted a drug trip, noting that “only in the vagueness, the sense of dislocation, can you find any real hint of such an experience.” One student thought it was about the serenity of being up in the sky, while another thought it described how the singer felt while being with his girlfriend. When informed the song was banned, one girl asked “what do they think they’re trying to hide from us?”

(Among the students interviewed was future Fashion Television host Jeanne Beker. While she didn’t comment about the Byrds, she guessed that the title of Bob Dylan’s “Rainy Day Women #12 & 35” evoked the concepts of “woman is the world and the rain is just the hate falling on the world.”)

The mixture of rock and soccer didn’t go smoothly at what the Globe and Mail’s John Macfarlane dubbed “Toronto’s first op-pop-soc-hop.” Around 3,000 teens showed up, less than half the audience organizers required to break even. The evening began with a trio of local acts, followed by a match pitting the Falcons against the Hamilton Primos. Overheard in the stands: “What are those squares doing out there kicking a rubber ball around?” Kids bored by the game may have perked up during the halftime go-go dancing spectacular.

After the Falcons earned a 3–0 victory, the audience anxiously awaited the arrival of the Byrds. CHUM DJ Bob McAdorey urged the crowd to “spread out and sit on the natural seat God gave you” before the band performed. While 30 police officers threatened to send excited girls “back to Yorkville” if they didn’t move away from the stage, the band played a half-hour set. “No one will ever know whether they were good, bad, or indifferent,” Macfarlane observed. “At times it was difficult to tell what they were playing above the screams of the crowd.” Star reviewer Douglas Hughes felt “the affair had all the most depressing characteristics of a mass outdoor funeral,” and structured his report in such a manner.

On his way out of the money-losing concert, Hughes overheard a girl suggest to a boy that they head to Yorkville to see “some groups up there that really swing.” He dismissed the idea. Hughes didn’t blame him, as there was “no point in risking another funeral.” 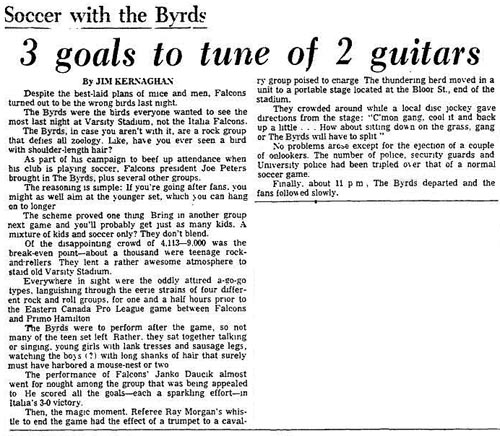 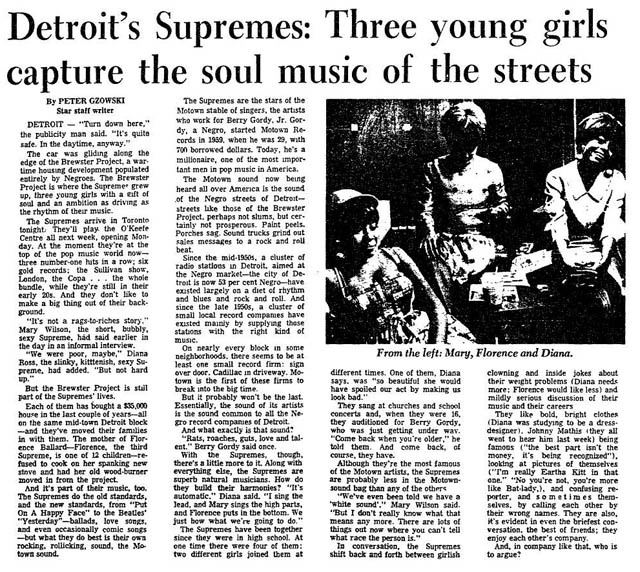 This profile of the Supremes by Peter Gzowski was on the same page of the Star as Fulford’s piece.

Originally published on Torontoist on April 21, 2017. 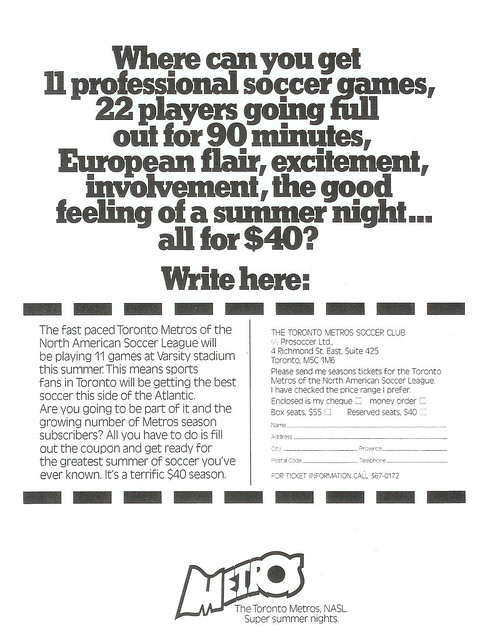 With Toronto FC’s home opener drawing near, today’s trip in the wayback machine stops at an earlier point in the city’s professional soccer history, offering “super summer nights” for a pair of twenties.

The Metros joined the North American Soccer League in 1971. This was the city’s second go-round with the league – the Toronto Falcons had been a charter member in 1968, but folded after one season. When this ad appeared, the Metros were coming off a first place finish in NASL’s Northern division, losing in the semifinals to the Philadelphia Atoms. 1974 wasn’t as kind – second place, a losing record (9-10-1) and a drop in average attendance (from 5,961 to 3,458).

The Metros merged with Toronto Croatia of the National Soccer League to form the Toronto Metros-Croatia, whose high point came with an NASL championship in 1976, led by Portuguese star Eusébio. The teams split apart two years later, with Global Television buying the Metros, renaming them the Blizzard and moving them to Exhibition Stadium for the 1979 season. The team remained in NASL until the league’s demise after the 1984 season, then continued on as a member of several other leagues before winding down ten years later.

This post barely tells the story of the Metros. Check out my Historicist column on pro soccer in Toronto in the 1960s and 1970s, culminating in the Metros-Croatia 1976 Soccer Bowl victory.

Toronto FC debuted in 2007. They lost their home debut 1-0 against the Kansas City Wizards on April 28, their fourth loss in a row. The losing streak ended on May 12 during a home game against the Chicago Fire. They finished the season in the MLS Eastern Conference basement.