Originally published on Torontoist on October 5, 2010. 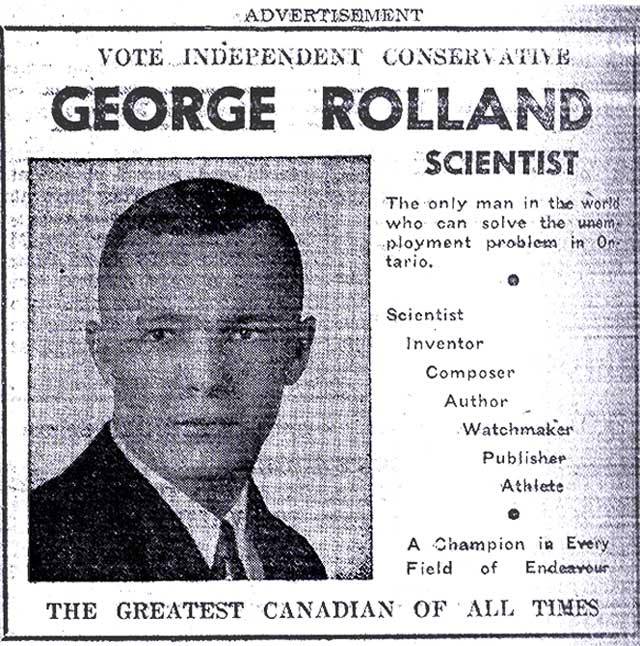 During the current municipal election campaign, some candidates have unveiled promotional materials that demonstrate just how ballsy they are about their ability to govern the city. But for sheer belief in one’s abilities, few can match perennial 1950s fringe candidate George Rolland. The self-styled “greatest Canadian of all times” (we thought that title belonged to Tommy Douglas) tried to gain access to City Hall, Queen’s Park, and Parliament Hill and failed each time. Today’s ad, and its listing of his diverse talents, made Rolland an irresistible choice to 317 voters in the riding of Eglinton during the provincial election of 1955.

The great man had two major liabilities. Number one was a massive ego which led to all kinds of narcissistic fantasies. Whenever he showed up at candidate meetings during his run for Toronto’s Board of Control in 1954, he brought along a display board covered in medals he won in athletic competitions, which he felt entitled him to be a controller. It was reported that he sat in the window of a store he once owned and had a spotlight directed upon himself. He wrote an endless stream of letters to City Hall and local newspapers to prove his genius. As for his belief in his musical genius, Star columnist Ron Haggart noted in a 1960 profile that “he said there had been no composers worthy of mention in the past 500 years (except himself) and he had redesigned the musical scale.”

Liability number two was not so easily dismissed: the man was a raving racist. In his 1954 platform, Rolland promised to introduce “racial segregation laws” that would “correct the inter-racial mixing menace that sweeps over the world today, and destroys the true meaning of Christianity and destroys the self-respect of all persons alike.” If enacted, Rolland’s laws would have applied to schools, churches, hotels, restaurants, residences, and so on. His dream of bringing a touch of South Africa to Toronto was greeted with boos during candidate gatherings. His racist leanings became more pronounced as time wore on, climaxing in a fiery appearance on the CBC TV show Live a Borrowed Life in September 1959. Instead of limiting himself to talking about his supposed expertise on Abraham Lincoln, Rolland told the panel that blacks should move to Africa to establish their own culture instead of battling discrimination.

Rolland filed nomination papers to run yet again for the Board of Control in November 1960. His campaign would have likely included a battle against the design of the new City Hall, as its curving towers were “alien” in concept and would, he claimed, cause a vortex that would transform light breezes into hurricane-strength winds. But Rolland never got to make any more stump speeches. On November 23, the deadline day for candidates to qualify or drop out of the race, Rolland died of a heart attack at the age of fifty-six. His death almost sparked a crisis, as due to the rules of the day, a new nomination meeting had to be held no less than seven days before the election, on December 5. Such a meeting required six days notice in a newspaper. Time was tight and the spectre of holding a separate election for the Board of Control loomed. This scenario was avoided when the Star indicated it could slip the official notice into that evening’s paper. As Haggart noted a week later, “at City Hall, where they laughed cruelly at George Rolland, they had to take him seriously at last.” 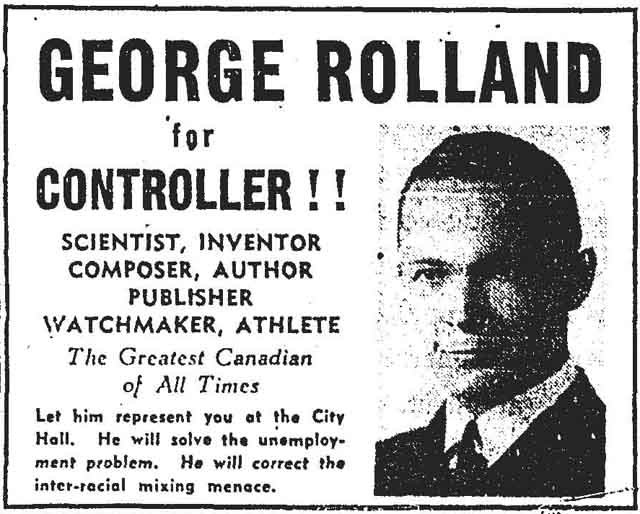 Globe and Mail, December 5, 1955. One suspects the paper wouldn’t run such an ad today.

Checking my files, it appears I only used the Star‘s archive when I wrote this piece. So, when prepping this reprint, I browsed the Globe and Mail to see what they had to say about this great Canadian. I’m happy to report that they didn’t pull any punches in calling him out for what he was, especially near the end of his life.

Here’s a description of his appearance at a candidate’s meeting during his run for the Board of Control in 1954:

Candidate George Rolland had a number of reasons last night why he should be elected to the Board of Control.

Winding up a rapid-fire election speech before a large audience at Brown Public School, candidate Rolland went to a satchel and pulled out a bright blue vest weighted with medals.

“Just look at those,” he exclaimed to the crowd.

He looked at the crowd for a moment.

“Folks, all that skill and all that co-ordination of action is yours if you vote for me December 6.”

Among some of Rolland’s other beliefs:

His appearance on Live a Borrowed Life provoked editorials in both the Globe and the Star. “Mr. Rolland’s record as a racial agitator is too well known for the CBC to plead ignorance of his offensive views,” the Globe and Mail observed. “It should have realized he would grasp the rare opportunity of a national network audience to present them.” The Star chalked the appearance up to “a producer’s boner,” and that the discussion of heavy issues like racism should occur in a weightier setting than a light entertainment panel show.

Also not impressed with Rolland’s CBC appearance was script assistant Janet Hosking, who watched at home while sick with pleurisy. “I sat and slowly died,” she recalled a few months later. 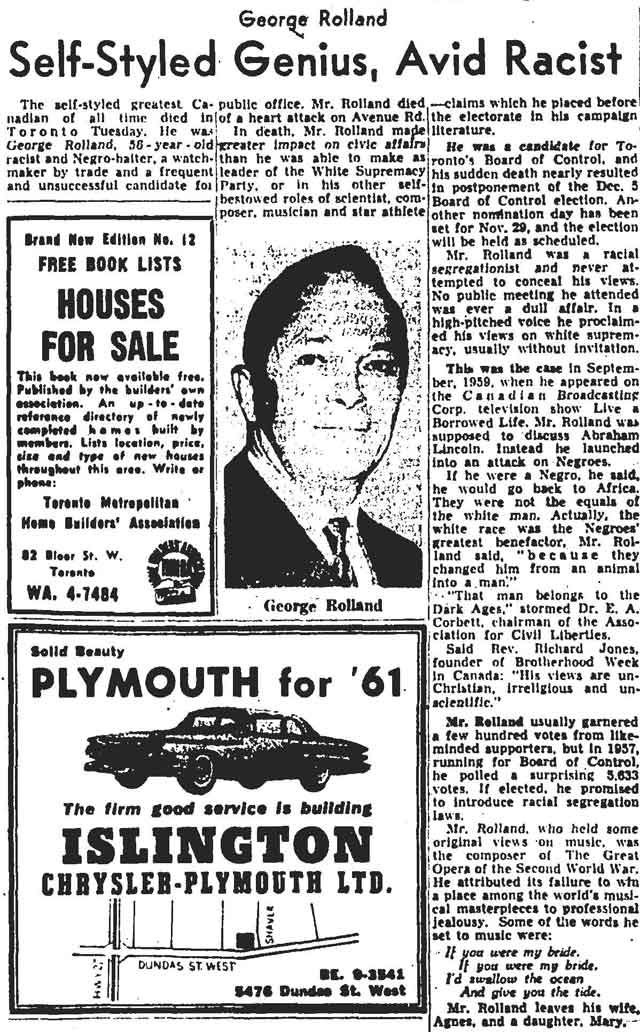 The headline of Rolland’s Globe and Mail obit pretty much sums up his character. One wonders how he’d thrive in today’s political climate. I’d hate to see his website…