Originally published as a “Historicist” column on Torontoist on January 19, 2013. 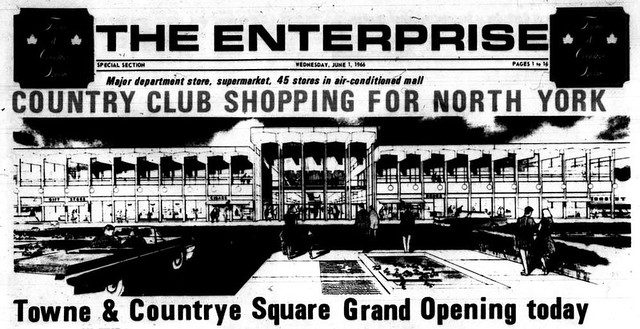 Following the opening of Lawrence Plaza in 1953, North York went shopping plaza mad. As the once-rural township transformed into postwar suburbia, farms gave way to large retail structures and their accompanying parking lots. From small neighbourhood strip malls to major shopping centres like Don Mills and Yorkdale, North York residents could do most of their shopping near home. Among the participants in this boom was the oddly spelled Towne & Countrye Square. When it opened at the southwest corner of Yonge Street and Steeles Avenue in June 1966, it touted itself as “Sophisticated ‘Downtown’ Shopping in a Country Club Atmosphere.” Although one would be hard-pressed to find any resemblance between a genteel golf course and the shopping centre’s present-day incarnation as Centerpoint Mall, credit the opening day ad writers for their imagination. As was typical of the era, the mall was greeted with several advertorial pages in the community newspaper, the Enterprise. 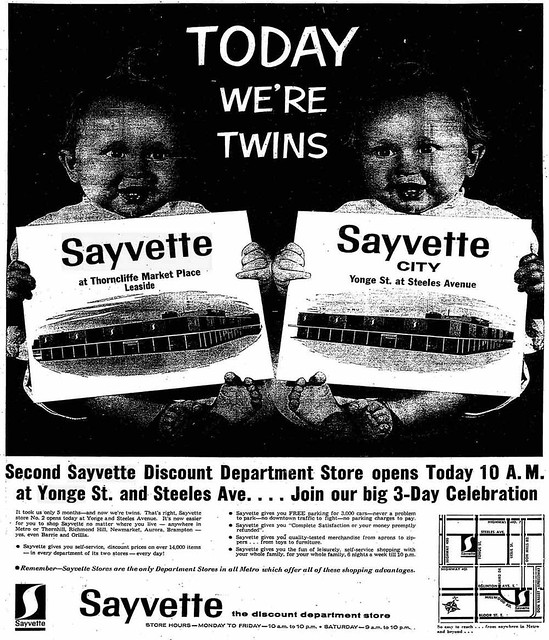 The oldest component of Towne & Countrye Square was Sayvette, which opened in November 1961. It was the second location for the discount department store chain, which had launched five months earlier in Thorncliffe Park. Management’s dreams of quickly building a Canada-wide chain crashed after the chain sustained a $1.5 million loss in 1962. By the time Towne & Countrye Square was built, Sayvette was supported by a mysterious saviour who eventually turned out to be Loblaws. 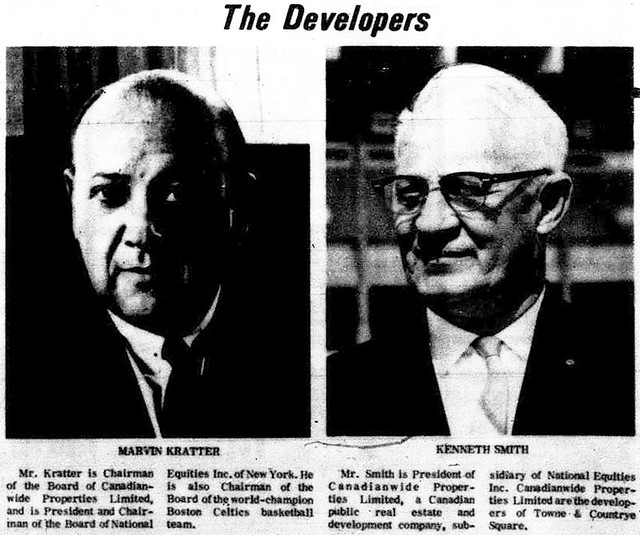 Mall developer Marvin Kratter was one of Sayvette’s initial investors before withdrawing his shares within a year of the chain’s launch. The New York City-based real estate investor briefly owned Ebbets Field in Brooklyn then built the apartment complex which replaced the legendary baseball stadium after the Dodgers moved to Los Angeles following the 1957 season. When Towne & Countrye opened, Kratter owned the Boston Celtics basketball team, who had just won their eighth consecutive NBA title. His New York Times obituary noted that Kratter viewed the team as a vehicle to promote one of his other investments: Knickerbocker Beer.

The mall’s unusual name was the result of a “Name the Centre” contest which drew 18,000 entries. The winner was Harry Wong, described by the Enterprise as “a semi-retired chemical engineer, of 62 Elm St., Toronto.” Wong received $1,000 and a return trip for two to Bermuda via Air Canada. There was no explanation why Wong added an extra “e” to “town” and “country”—we suspect it was to lend an antiquated, rustic air to the enterprise, a la “ye olde.” 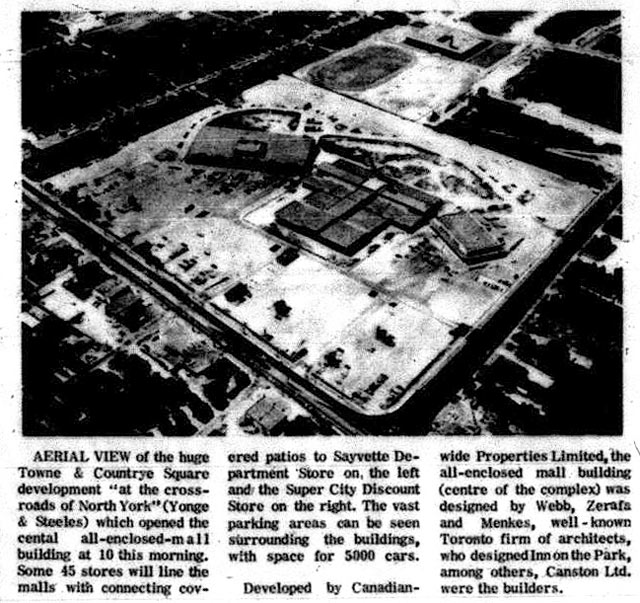 Anchors Sayvette and Super City were not directly attached to the main mall. Instead, they were linked by covered patios. A giant fountain was installed in the centre court. According to the Enterprise, “this huge floor-to-ceiling fountain ‘drops’ curtains of rain in three big circles within the fountain, while sprays add to the attraction around the base, and coloured lights enhance the effect.” 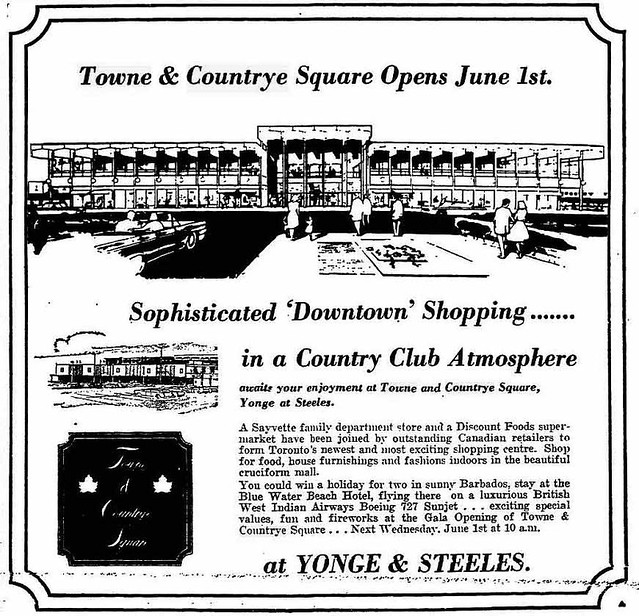 Ads for Towne & Countrye Square began appearing in local newspapers a week before the official opening on June 1, 1966. 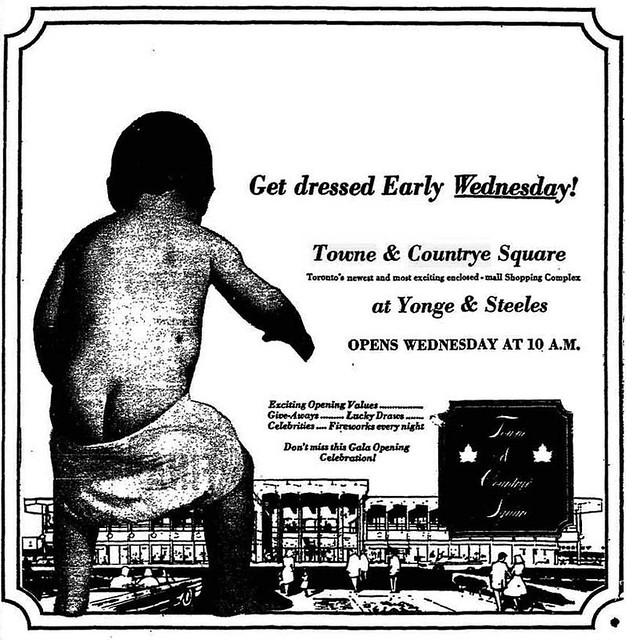 Management tried to draw every demographic to the new shopping centre, including toddlers mutated into giants by atomic radiation. 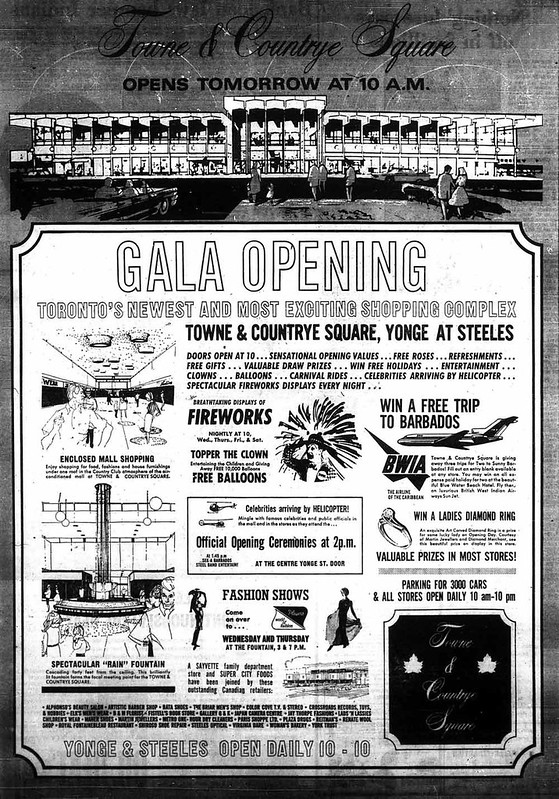 Among the amenities not mentioned in this ad: an auditorium, banquet space for up to 400, and a Tuesday night jazz concert series.

Indoor suburban shopping centres were still a novelty in 1966. “A completely enclosed shopping mall,” the Enterprise advertorial noted, “is like a building turned inside out. The entrances are on the inside and the outside is actually the backs of stores.” Designers used touches like quarry tile flooring, light filtered through skylights, plants, park benches, and street lights to create an illusion of being outside.

The Enterprise noted that Towne and Countrye’s stores preferred hiring local employees. “We are a part of the community and want to contribute more than just real estate and merchandise,” a mall spokesman noted. “By hiring our employees from the area, we are augmenting the basic income potential of the people who live there—our neighbours. This policy will be a sound addition to the economy of the area and play a major part in the future growth of the Towne & Countrye Square complex.” 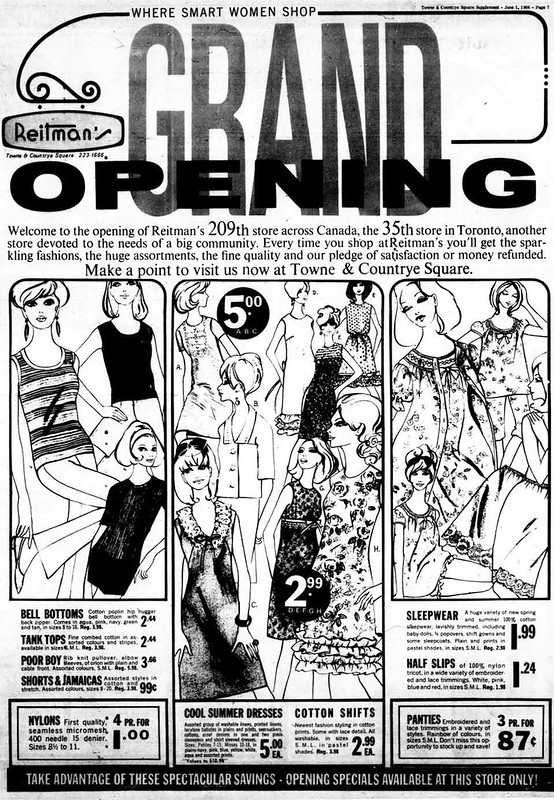 Reitman’s PR department was eager to tout the clothing retailer’s 209th store. An accompanying article noted that like its other locations, the Towne & Countrye store emphasized service and comfort: “Wide aisles, air-conditioning and restful lighting are installed with careful consideration for customers.” 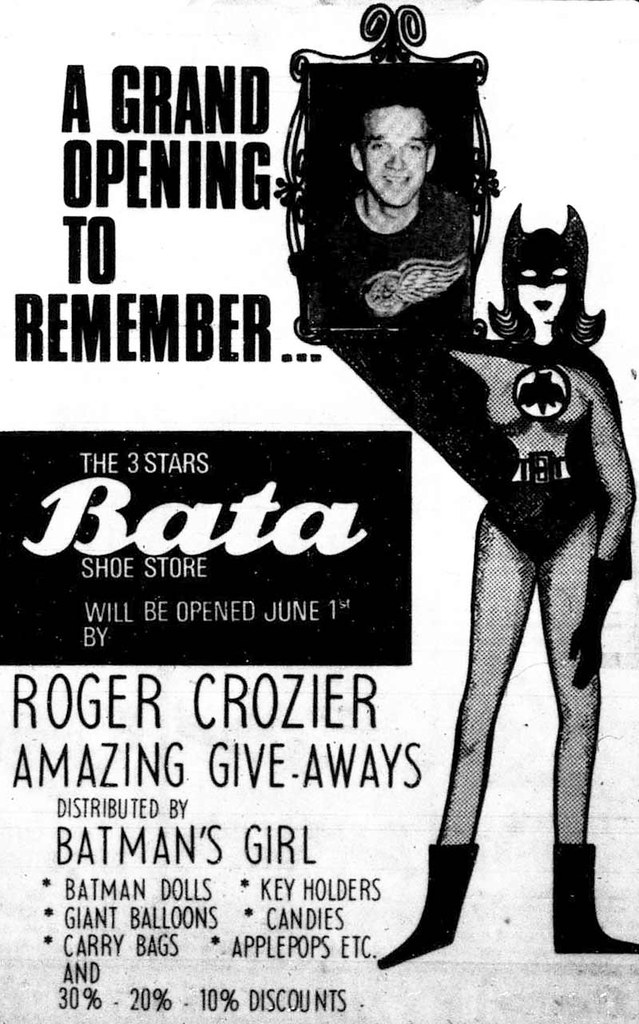 It may seem odd that Bata didn’t bring in a Maple Leaf to open their Towne & Countrye location, but Detroit Red Wings goalie Roger Crozier was a good choice to draw in hockey fans. Despite suffering a bout of pancreatitis at the start of the 1965-66 season, Crozier led the Red Wings to the Stanley Cup finals. Though the Montreal Canadiens hoisted the cup, Crozier was rewarded for his efforts with the Conn Smythe Trophy as the playoffs MVP.

Bata also tried to exploit Batmania, though it was a year ahead of the Adam West TV series when the shoe store unveiled its version of “Batman’s Girl.” While a short-lived “Bat-Girl” served as a romantic interest for Robin in early 1960s comic books, this female caped crusader could almost be a prototype of the better-known Barbara Gordon incarnation of Batgirl. 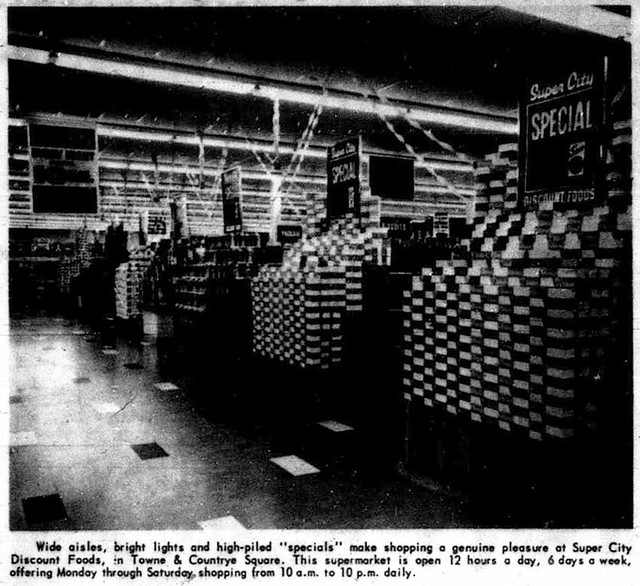 Super City Discount Foods was Loblaws’ lower-price banner during the 1960s, though management refused to publicly confirm or deny the grocery giant’s involvement. In the annual corporate report, Loblaws listed sales derived from Super City among other unidentified subsidiaries like National Grocers and Pickering Farms. By the time the connection was acknowledged in the late 1960s, Super City was merged with another Loblaws-owned budget chain, Busy-B. 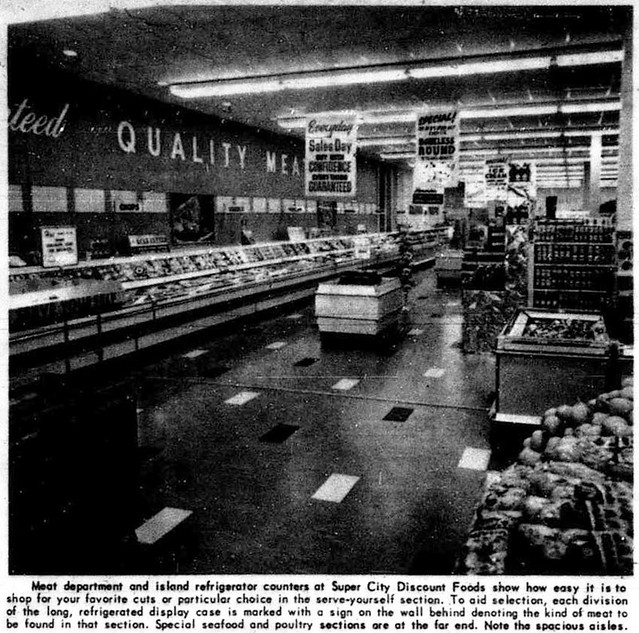 In its Enterprise advertorial, Super City promised customers “an exceptionally fast check out system, with extremely courteous cashiers.”  The piece also boasted about attractively displayed produce that was so fresh “it’s almost like picking them yourself.” 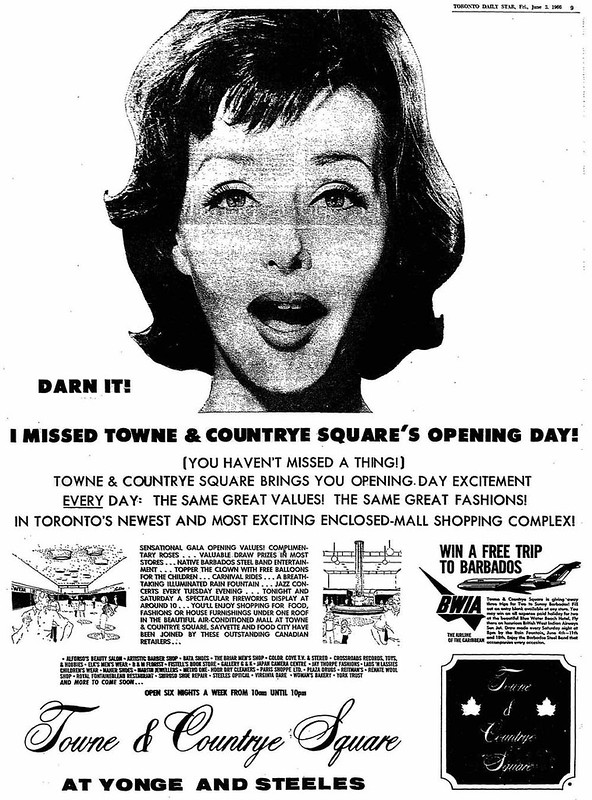 If this customer made up for missing opening day by becoming a regular patron of Towne & Countrye Square, she would have witnessed many changes in the years to come. Later additions included a movie theatre and a Bay department store, while Sayvette was replaced first by Woolco, then a succession of Loblaws-owned banners. 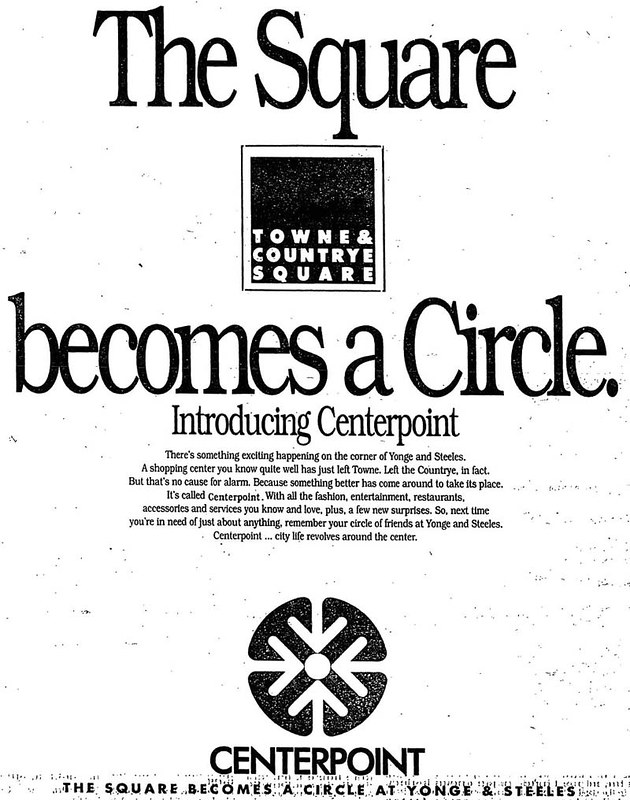 “Strange! Did the shopping ‘centre’ people hire Americans to do this material and rename their ‘centre?’ Or are we really becoming so much Americanized that even these subtle Canadian differences are to disappear completely? I know that publications have for years left out the “u” in words like labour and favour in order to save space. But, frankly, it still sends shivers through me to see theatre spelled theater, labour and favour as labor and favor, and NOW THIS! Just curious.”