Originally published on Torontoist on June 25, 2015.

The 1991 parade was the first to be officially proclaimed by the city. Over the ongoing objections of Mayor Art Eggleton, city council voted the previous fall to recognize the growing event. Its approval aligned with a growing sense that the LGBT movement was going mainstream. In a pre-parade profile of activists across the country, the Globe and Mail noted a joke making the rounds that provided a new definition for S&M: “Scarborough and Mississauga.”

Shortly before the parade, the Metro Toronto Police Services Board announced that it would recognize gays and lesbians as a community entitled to policing that was sensitive to its needs, a turnaround from treating such people as sources of drug abuse, sex work, and perversion. “It’s an important step,” declared board chair Susan Eng. “We have come of age and are starting to do what we should have been doing for a long time.”

Eng was among the civic officials and politicians on hand when the proclamation was read prior to the start of the parade on June 30, 1991. Since Eggleton refused to read the document, the duty was performed by councillor Jack Layton. The parade was nearly derailed when it was discovered the permit indicated a 1 p.m. launch instead of 3 p.m. as scheduled. Police reportedly insisted on moving the time to 2 p.m. as a compromise, or else the event would be shut down. While the procession was only supposed to shut down the northbound lanes of Yonge Street, the crowd spilled onto the southbound lanes, effectively closing the entire road. Elsewhere, gay-centric businesses offered entertainment and free meals, and Ryerson’s CKLN debuted live radio coverage of events.

Flash forward to 1999. Having exploded in size, the parade was now front page news. The Star depicted Mayor Mel Lastman, who’d expressed reservations about attending the year before, gleefully joining councillor Pam McConnell in super-soaking council colleague Kyle Rae. Even the Sun covered the festivities with a limited degree of respect, calling no-show Fred Phelps (who had threatened to disrupt Pride) “a hate-filled nutbar.” As eye put it, the party atmosphere surrounding Pride led to attendees “tripping on a two-day, non-stop, feel-good sensory overload” regardless of their sexual orientation. “If you’re not doing drugs, your face hurts on Monday from the perma-grin.”

Eye also published a suburbanite’s guide to the celebrations, offering advice such as “Woody’s is not a Cheers-themed bar owned by Woody Harrelson.” Some of those coming in from outside the core may have been teenagers drawn by the debut of youth-centric events, such as Fruit Loopz held at Buddies in Bad Times. Seeing teens march along didn’t impress some standing along the sidelines—the Star reported a 50-year-old parent from Peterborough who, when she saw 16-year-old Tina Mollison wander by, told the paper “Just look at that innocent child. What does she know about love and sex, about lesbianism? The parade glamourizes it.” The paper caught up with Mollison. “Parents should give us respect,” she noted. “We know what we want and we know how to go out and get it.” 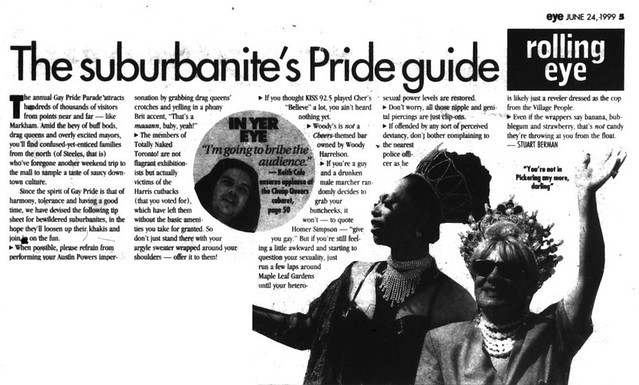 Toronto Sun, June 27, 1999. On one hand, it called Fred Phelps a nutbar. On the other, it defended Mike Harris’s decision not to attend the Pride Parade. I’d expect something even shriller if the incoming premier decides not to attend the 2018 edition.