When the Middle Road (today’s Queen Elizabeth Way) opened as a divided four-lane highway in the fall of 1937, it took some drivers awhile to adjust to this new style of road. The Toronto Star ran a photo essay on some of the problems drivers were causing, primarily staying within lanes. This is as much a problem driving along the GTA’s expressways today as it was over 80 years ago.

Before its conversion to a proto-expressway, the Middle Road was a back road, which some nighttime drivers still believed it was.

The Globe and Mail believed the Middle Road signalled “a fresh start in Ontario’s beautification.”

Besides having difficulty staying in their lanes, early drivers on Middle Road thought the 50 miles per hour (80 km/h) speed limit was too slow. “Where the boulevard separates the lanes, one can safely travel 70 miles an hour [112 km/h],” a motorist told the Toronto Star. “Where there is no boulevard 60 miles an hour [96 km/h] would seem to be fast enough. But I see no point in having a blanket speed limit that limits a motorist to 50 miles an hour on a two-lane country road and forbids him to travel any faster on a super-highway obviously built for higher speeds.”

Police estimated around 200 drivers a day drove at 75 mph. These drivers stuck in the left lane without problems until they ran into vehicles occupying the middle of the road, which police felt were a greater menace.

Among the modern touches: Canada’s first cloverleaf interchange, built at what is now the Hurontario Street exit off the QEW.

The Middle Road was officially renamed the QEW in June 1939. At left, an OPP officer points to the sign which would appear in the centre of the boulevard at all intersections (in this case, in Oakville). The sign on the right was placed along the highway.

Additional sources: the October 12, 1937 edition of the Toronto Star.

Originally published on Torontoist on April 15, 2008.

Sometimes what passed for clever advertising in the past leaves us speechless. Note that today’s ad appeared seven years before Advertising Standards Canada came into being. 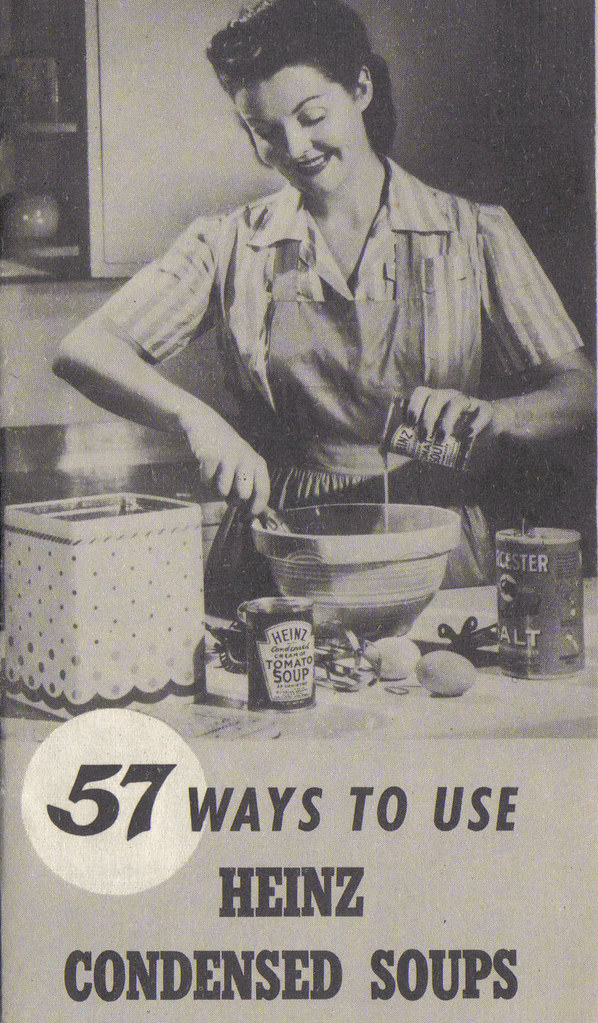 The free guide offered in this ad was first published in 1944 and offered the following words of wisdom:

Soup has long played a stellar part on the Canadian menu—but never has it filled so many interesting and appetizing roles as it does today! Formerly served as a first course, versatile soup now appears as an important ingredient in dozens of dishes—dressings, meat loaves, rarebits, casseroles and many another old favourite. For housewives have found this a quick, thrifty way to make everything from sauces to salads extra nourishing and delicious.

Most of the recipes provided in the guide are mid-20th century staples, though some lean toward the exotic-sounding (“Fricasseed Chicken with Marengo Sauce”), fattening (“Weiner-Vegetable Casserole” loaded with bacon drippings), or are overdue for a modern remake from the city’s finest chefs (“Tomato Soup Cake” complete with cream cheese frosting).

420 Dupont Street still exists as an address, though Heinz moved their Canadian head office to North York long ago. The site, located at the NW corner of Dupont and Howland, was later the home of Mono Lino Typesetting, and has served as an exterior for films such as Hairspray.

Searching for stories about domestic abuse published in Toronto’s papers in 1950, the majority of reports related to sentences handed out to offenders in Trafalgar Township (present-day Oakville). The June 30, 1950 edition of the Star reported that Bronte resident Elmer Catley was sentenced to four days in jail and “10 strokes of the strap” for wife-beating. He was also ordered to post a $500 property bond and pay $25 in costs, or face 10 more days behind bars. Trafalgar Township police chief Fred Oliver noted that “liquor is this man’s downfall.” Catley was denied a request to be placed on the LCBO’s “Indian List,” which would have blocked his access to alcohol.

Lashing appears to have been a common punishment at the time in Bronte. The December 15, 1950 Globe and Mail reported the sentencing of Walter Ripley to 10 strokes, along with two months hard labour.