Originally published on Torontoist on February 23, 2010.

Picture yourself as a downtown shopkeeper heading home after a busy May afternoon eighty years ago. After locking up, you stop by the corner newsstand to pick up the evening edition of the Daily Star. Looks like it’s your lucky night: there’s an empty seat on the streetcar. Making yourself comfortable, you flip through to see if there’s any word on how last night’s Board of Education vote on the confirmation of a director at your son’s high school went…ah, there it is, wedged onto page thirty-three between accounts of a car wrapped around a telegraph pole at Bloor and Parliament and a woman who suffered a fatal “illegal operation.” Before you dive into the article, two ads on opposite sides of the page catch your eye.

On the left side of the page, there’s the Sally Ann urging you to deny yourself some small pleasure in life so that their enlistees can rescue a shifty man reduced to liberating boxes wrapped in plain brown paper. On the opposite side, there’s the Toronto Hydro Electric System urging shopkeepers like you to invest in fancy window-display lighting to draw eager tourists ready to spend money into shops like yours. You ponder both of these pitches for a moment—despite the worsening economic climate, your business is doing well enough to have extra money to toss around. In the battle between your commercial and humanitarian instincts, which will win?

The answer is neither. You read about the school vote, then flip to the sports section and decide which horse races to consult on with your bookie.

Here are the other stories this post alluded to, all taken from page 33 of the May 2, 1930 edition of the Toronto Star.

During this era, “illegal operation” tended to be code for an abortion.

Northern Vocational School welcomed its first students later that year. It evolved into today’s Northern Secondary School. One of the trustees mentioned in the article, Adelaide Plumptre, had a distinguished public service career. Her milestones included serving as superintendent of supplies for the Canadian Red Cross during the First World War, a city councillor, and the first female chair of the Toronto Board of Education. 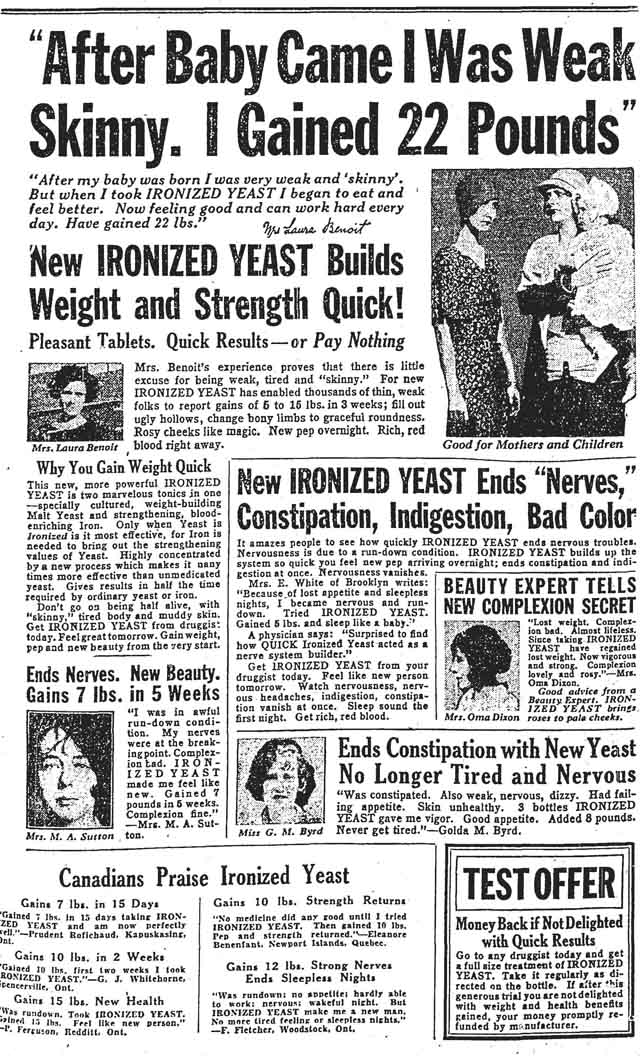 I’m kind of dubious about the true benefits of ironized yeast.

Finally, this piece of advice/words of wisdom/space filler appeared in the middle of the page, below the illegal operation story.