Originally published on Torontoist on August 18, 2009.

It was ninety years ago today that east-enders were first able to enjoy fine entertainment at the theatre that underwent numerous name changes between its opening as Allen’s Danforth and its current incarnation as the Music Hall. Growth in what was considered suburbia in 1919, along with the ease of reaching Danforth Avenue via the recently opened Prince Edward Viaduct, persuaded the Allen’s cinema chain to build a high-quality theatre in the neighbourhood.

The Mail and Empire provided a preview in its August 16, 1919 edition:

After having traced them half-way across the United States and a large portion of Canada, Messrs. Jule and Jay J. Allen received with great relief yesterday the news of the arrival of the 1,800 seats for their new Danforth theatre, which will be opened on Monday evening. The handsome structure is entirely complete and it is promised that it will show the people of Toronto something new in the way of cinema house construction. Although this house has been built largely for the convenience of the residents of the Danforth and Rosedale sections of the city, it is one of the largest motion picture houses in Toronto and among the most modern. There will be no formalities for the Monday evening performance, but the theatre will be open to the general public. 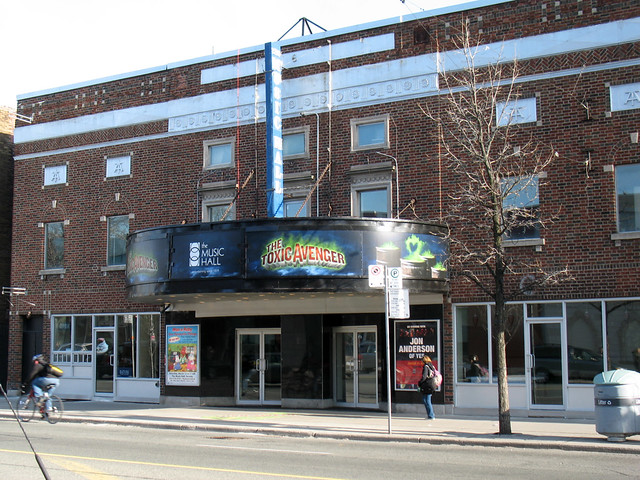 The Music Hall, March 30, 2010. My notes indicate Toxie hadn’t been on the premises for awhile. The poster slots are currently filled with upcoming listings deep into 2020. Click on image for larger version.

The theatre marked its 90th with a plaque presentation by Heritage Toronto, followed by a silent feature with live piano accompaniment. As the opening night film exists in fragments, viewers saw another Madge Kennedy vehicle, 1920’s Dollars and Sense. The admission price was sensible—only one thin dollar. It was a fun evening, despite a few technical hiccups.

The Music Hall is still a busy concert venue, marking its 100th anniversary in 2019.

From the Toronto Star‘s August 7, 1919 description of Through the Wrong Door:

Through the Wrong Door is playing to capacity houses at the Allen this week, and the exvellent feature which is offered more than justifies the large crowds. Light, gay, and amusing, Through the Wrong Door is frankly composed to chase dull care away, and it is so well interpreted by Madge Kennedy and the cast in general that the effect is a very pleasant one. She softens and beautifies by some very fine acting the role of a bright young girl who throws over her fiance abd elopes with a man she scarcely knows. In the new dignity of one who sympathizes with the man her own father has deliberately tried to ruin, who she is assisting to achieve natural justice, she plays the part so convincingly that the sudden change of mind and heart is not only excused, but approved most cordially.