Originally published on Torontoist on October 23, 2008.

Once upon a time, the stretch of Lake Shore Boulevard around Park Lawn Road was a stop for tourists and those looking for a quick good time, thanks to nearly thirty motels that lined the strip. All but three (Casa Mendoza, Shore Breeze, and Beach) are gone now, leaving empty lots awaiting their probable transformation into condominiums with romantic views of Lake Ontario and the Mr. Christie cookie plant.

The lag between the demolition of old motels, such as the Hillcrest and North American, and the arrival of new towers has allowed Mother Nature to take her course in several of the empty lots. The result: a streetcar shelter where riders on the 501 can enjoy the aroma of fresh-baked cookies to take their mind off any fears of someday being crushed by the emerging forest.

The overgrowth is creepier at night, making you feel like a doomed character in a “plants take over the world” story. A strong wind could easily conjure a week’s worth of nightmares.

UPDATE: All three of those surviving motels soon vanished. The Mr. Christie plant closed in 2013, and is being demolished as of fall 2017.

Originally published on Torontoist on October 30, 2008. Possibly my lone attempt to do an Action Line/The Fixer help piece.

When some people see an erroneous street sign, they call the city to have it fixed. Others will glance for a moment, pop their eyes, and then move along without a second thought. In the case of a faulty curve sign recently erected on Wicksteed Avenue in the industrial section of Leaside, one observer vented their frustration on the sign itself.

After we called the city’s transportation department, the sign was promptly removed. A bare metal post was all that remained as of last night.

Originally published on Torontoist on December 4, 2008.

Branches of Pizza Pizza are a common sight around Toronto. Most don’t jump out at the eye, though some outlets deserve marks for making an effort to stand out with artwork and other decorations (we miss the silver spangles that once graced Yonge Street). At the Danforth Avenue and Dawes Road branch it’s the attached eatery with a similar name that draws attention.

The shape of the outdoor sign hints at 2795 Danforth Avenue’s previous incarnation as home to Pizza Pizza’s sister chain Chicken Chicken. Give the pattern of repetitive names, our first thought was that the pizza giant had embraced the ethnic diversity of Toronto and decided to branch out into other forms of cheap, filling food—in this case, crispy, not-too-greasy Indian crepes and a variety of satisfying accompaniments. 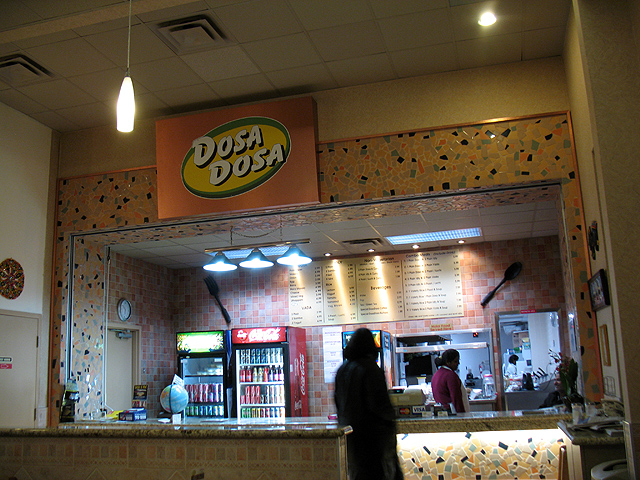 When contacted to determine if there was a connection with Dosa Dosa, Pizza Pizza corporate provided a one-word answer: no.

UPDATE: Dosa Dosa was replaced by other eateries. As of October 2017, it houses Double Sushi. The Pizza Pizza next door is still in business.