Originally published on Torontoist on July 8, 2008.

Art buyers can basically be divided into two categories: those who appreciate the thought and craftsmanship that go into the works and those who need something to offset their living room couch. While Toronto’s rich art scene caters to both groups, sometimes all the offset-the-couch buyer wants is a simple decorative painting that won’t empty their bank account. For them, as well as connoisseurs of the tacky, there is the starving artist sale option.

To convey the desperation of the artists behind these works, today’s model displays an unkempt beard and a well-worn button-down shirt offset by a pendant and floating pallet. You might be tempted to call his portrait “Bob Ross: The Years of Struggle.” The real artists behind these works might actually be starving, depending on the severity of the owners of the assembly lines that may have been a source.

Despite the artist’s enticement to buy his art, this ad doesn’t grab your attention the way its television equivalents have, where generic shoreline scenes and portraits of smoking dogs playing poker are sold with a nuance and subtlety reserved for monster truck rallies.

Originally published on Torontoist on February 26, 2008. 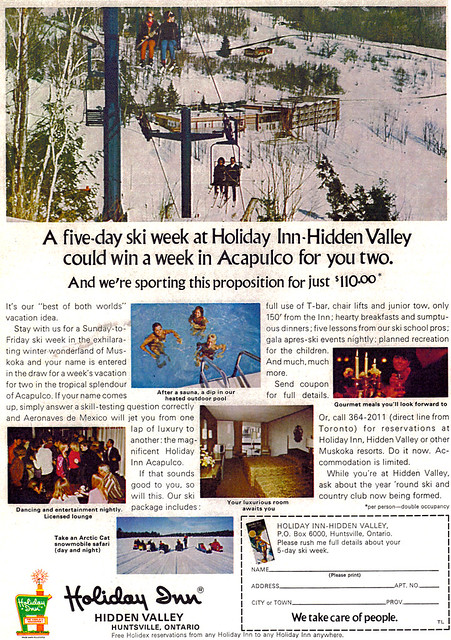 Your reaction to snow depends on the circumstances. The frequency of dumps the city has received so far this year has caused grumbling about blocked streets, dirty mounds higher than the average citizen and many a wish for spring to speed up its arrival. Conversely, as long as the roads outside the city are passable, lovebirds, families and outdoor enthusiasts looking for an escape from the city have headed up to Muskoka resorts like Hidden Valley to enjoy activities made possible by the white stuff.

Perhaps the gala après-ski events offered up sweater-clad singers for the swinging crowd and exciting new cocktail creations from the bar. It is unknown if the children’s events included choreographed snowball fights, piñata smashing (to tie in with the Acapulco promotion) and lessons on how to attract ski bunnies.

Today’s featured resort’s chain affiliations have varied over the years, with Holiday Inn one of the longest-lasting. Note the use of the chain’s classic “Great Sign” logo, a North American roadside icon through the early 1980s.

A sampling of skiing options advertised in the classified section of the December 12, 1968 edition of the Globe and Mail. We’re kind of curious about what the “total après-ski entertainment” at Hidden Valley entailed. 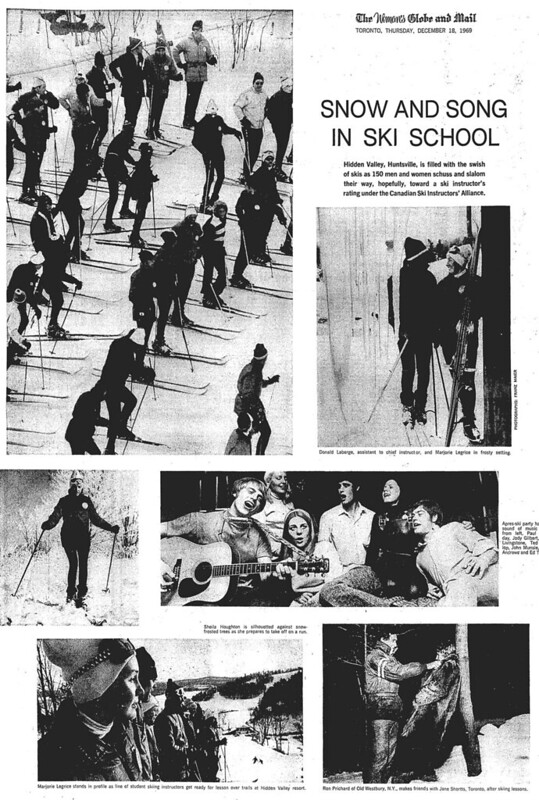 My family stayed at Hidden Valley one summer during the mid-1990s, while my sister attended a jazz camp at Lake Manitouwabing. By that point the hotel was a Best Western, and the restaurant was a Golden Griddle whose menu proudly boasted all the supermarket brands it served (let’s just say I was never thrilled the few times I ever ate at GGs). Little would I have suspected at the time that one of the instructors at the camp would someday be my father-in-law, and that my future partner-in-crime may have been hanging around the campsite.