This installment of my “Ghost City” column for The Grid was originally published on December 18, 2012.

To be honest, I misplaced my notes as to where this image came from. Source info appreciated.

By the mid-1930s, Bloor Street and Danforth Avenue were Meccas for local moviegoers. Along their length within the limits of the City of Toronto, at least 35 cinemas offered Depression-era patrons entertainment. Among them was an Art Deco-styled theatre that provided a steady stream of magic shadows for over 30 years.

Then addressed as 1606 Bloor St. W., the Bloordale opened circa September 1935 as part of the Associated circuit. The cinema was designed by theatre experts Kaplan and Sprachman, whose other Art Deco cinemas included the Eglinton. Promotions during the theatre’s early years included a weekly Sunday-afternoon talent show broadcast on CKCL radio (later CKEY) in 1938. Music Stars of Tomorrow promised a screen test with the short lived Grand National movie company for the best performer, though we suspect that the firm’s dissolution soon after prevented anyone from achieving Hollywood glory. After a spell as part of the Odeon chain, the Bloordale was renamed the State around 1948 and joined the 20th Century Theatres circuit. 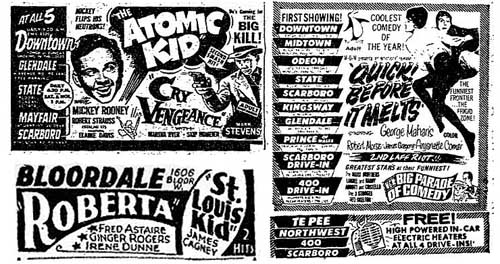 An incident reported to provincial theatrical regulators in 1957 illustrates how well employees handled any situation. On Nov. 30 of that year, a patron carelessly tossed a lit cigarette into a room containing cardboard boxes filled with empty, returnable glass jugs. The boxes ignited, but staff quickly put out the fire. To keep patrons calm in case anyone noticed any smoke, the manager announced from the State’s stage that excess smoke from the neighbourhood had entered the theatre’s ventilation system. The report observed that “patrons received the announcement good-naturedly and the program continued without interruption or further difficulties.” Damage was estimated at five dollars.

The State continued as a first-run movie house until it closed around 1968. “Although a well-thought movie house,” John Sebert concluded in his book The Nabes, the cinema “never reached its potential, as it was on the fringe of about five neighbourhoods, but part of none.”

When the building was converted into the Quo Vadis banquet hall in the early 1970s, it ran into problems with the nearby Junction neighbourhood’s dry status. That the building stood within 10 feet of the southern boundary of the alcohol-free zone prompted owner Harry Snape to join businessmen from The Junction in successfully petitioning City Council for a vote on liquor during the 1972 municipal election. The dry forces, led by “Temperance Bill” Temple, went into full battle mode, claiming the money spent campaigning was better spent on footwear for children. Voters agreed, as all nine questions that would have allowed liquor were defeated. Snape, who served as the pro-booze spokesperson, warned that businesses like his would be driven away.

For years, the building housed Pekao Trading & Travel. During the late 1990s and into the 2000s, it was also home to Pekao Gallery, which Canadian Art magazine called “one of Toronto’s better-kept secrets.” Besides art exhibits, the underground space also served as a jazz venue. The building is currently home to an employment centre, frame store, and insurance office. The narrow vertical strip advertising Frame It on Bloor fills the space where the State’s projected sign once lit up the night.