A batch of holiday-themed Vintage Toronto Ads columns from 2007.

Part One: Leaping into the Holiday Espirit

Originally published on Torontoist on December 4, 2007. 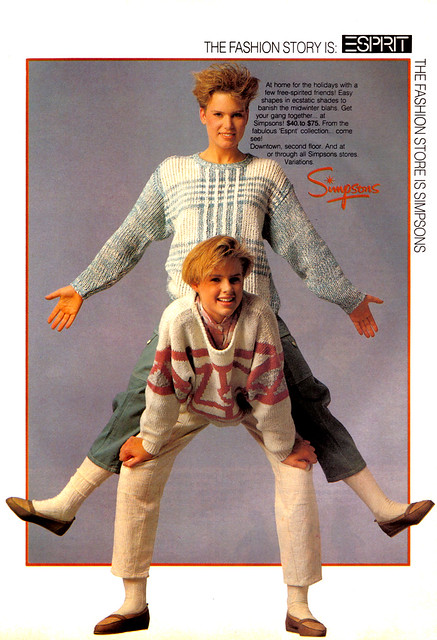 The holiday shopping season has descended upon the city, along with an early blast of winter. This combination may lead shoppers to unconsciously purchase items to cure their winter blues, even if the calendar shows that fall has a few more weeks to go.

Today’s ad offers a prescription from Simpsons and Esprit to keep free-spirited souls in an ecstatic mood come February. A trip down to the historic Queen Street department store promised relief, with a checkout line standing in for a waiting room.

This cure for the midwinter blahs appears to have worked for our models, who discovered that the colourful zig-zag sweater patterns unlocked a yearning for childhood games. They called up the rest of the gang, found an empty studio, and played leapfrog, jump rope and dodgeball for several hours.

Originally published on Torontoist on December 11, 2007. 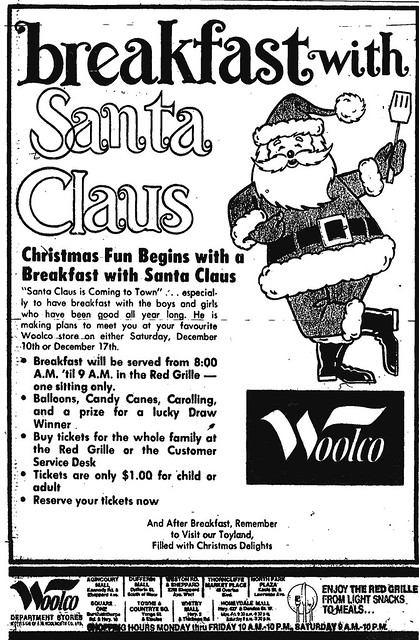 A longtime staple of the holiday season is a special visit from jolly old St. Nick to the nearest shopping mall or department store. Kids relish the opportunity to tell Santa that they want the latest hot toy, peace on Earth or an official Red Ryder Carbine-Action Two-Hundred-Shot Range Model air rifle, while retailers hope these gift lists translate into sales. If the establishment has hired their Santa carefully, kids will not need to purchase Santi-Wrap before sitting on the big elf’s lap.

The F.W. Woolworth Company entered the discount department store battlefield in 1962, the same year rival five-and-dimer S.S. Kresge launched K-Mart. As Woolworth’s had long operated traditional outlets in Canada, it wasn’t long before the new format was launched in Toronto. Known for promotions such as “$1.44 Days,” Woolco proved to have a longer life here than stateside, where all locations were shuttered by 1983. The chain had 160 locations by the time it was sold to Wal-Mart in 1994.

The Red Grille was Woolworth’s cafeteria concept, found in Woolco and larger Woolworth’s stores on both sides of the border. Torontoist remembers that many had wobbly, flip-down red seats kids loved to play with, usually while sipping a drink in a red-striped cup. The smell was distinct, fried food mixed with an undefined element. We’re not sure how Santa or store management would have handled children who were bad all year––maybe they weren’t allowed to grab a package of Peak Freen cookies at the cashier.

These cafeterias were the descendants of the lunch counters that occupied Woolworth’s and many of its competitors. Toronto’s last surviving example of a five-and-dime counter, located in a former Kresge at Coxwell and Gerrard, closed earlier this year.

Of the locations listed in today’s ad, four continue to operate as Wal-Mart stores (Agincourt Mall, Dufferin Mall, North Park Plaza and Square One), while the others have been converted to other retailers or demolished.

As for Woolworth’s, the last of its North American five-and-dime stores closed in 1997 when the company decided to concentrate on its mall-based specialty chains. Several name changes later, the company continues to operate under the corporate name of its largest subsidiary, Foot Locker.
Part Three: Give the Gift of Baseball

Originally published on Torontoist on December 18, 2007.

‘Tis the season for gift certificates. Whether you’re scratching your head trying to figure out what to give to an impossible recipient or selecting your loved one’s favourite store or service, the selection of certificates, cards and vouchers seems unlimited. More than a few local sports woke up on Christmas morning three decades ago to find one of today’s passes for the Blue Jays’ second campaign as a stocking stuffer.

The Jays finished their debut season in a familiar spot for expansion teams, last place in the American League East. Despite a record of 54 wins and 107 losses, over 1.7 million fans cheered for the team at Exhibition Stadium. Orioles castoff Bob Bailor led hitters with a .310 average, while Dave Lemanczyk led the pitching staff with 13 victories. Of the players who took the field that year, only pitcher Jim Clancy and catcher Ernie Whitt were still in Toronto uniforms when the Jays made their first trip to the playoffs in 1985.

That the team had a store in Commerce Court wasn’t a great surprise, as the Canadian Imperial Bank of Commerce was one of the original owners of the franchise, along with Labatt’s Breweries and Imperial Trust. The bank retained an ownership share until it sold its last interests when Rogers Communications bought the team in 2000.

Originally published on Torontoist on December 25, 2007. 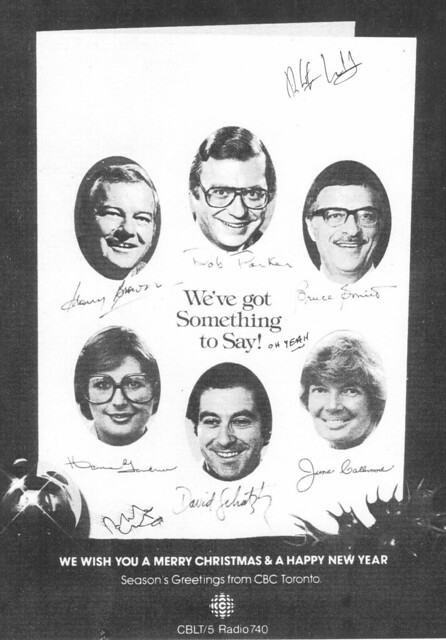 A short but sweet season’s greeting for you from some of CBC Toronto’s mid-1970s personalities. Dig those frames on young Hana Gartner! The passage of time has made it hard to determine if the “oh yeah” was part of the original ad or a sarcastic comment by a previous reader.