Originally published on Torontoist on April 13, 2012.

An ad for voyages of the Titanic that never took place, published the day before the unsinkable ship sank. The Globe, April 13, 1912.

H.G. Thorley had little inkling that he would be the busiest man in Toronto on April 15, 1912. Just before 2 a.m. that morning, the local agent for White Star Line received a phone call requesting information on the condition of the luxury liner Titanic, rumoured to have hit an iceberg on its maiden journey from Southampton to New York City. “From two o’clock until after six,” Thorley told the News, “I was forced to sit in an easy chair by the phone and answer questions of all description.” For the next two days, the swinging door of Thorley’s office at the King Edward Hotel was in constant motion as news of the maritime tragedy unfolded.

Early reports were promising. Newspapers declared that the passengers aboard the Titanic were safely and smoothly being transferred onto another ship, the Carpathia, while the liner itself was being towed to Halifax. A statement from White Star Line indicated that while the company hadn’t received direct messages from the Titanic, they weren’t worried about its passengers because the ship was “practically unsinkable.” Thorley shared his employer’s confidence in the ship’s ability to survive anything: “I can hardly credit the idea of the Titanic being in a sinking condition. She is the most completely equipped with water-tight compartments and the most strongly built liner on the high seas.”

Reports from Cape Race, Newfoundland indicated good weather and calm waters in the vicinity of the Titanic, conditions that suggested little danger to anyone waiting in a lifeboat for a rescue from the vessel Virginian. One detail raised eyebrows: “It was difficult,” the News reported, “for even mariners to interpret the situation from the Marconi dispatches. They could not understand why it was necessary to take off any passengers if the liner were sinking slightly at the bow, unless her captain felt that the water-tight compartments would give way.”

Besides the throngs at the King Eddy, Torontonians gathered around the city’s newspaper offices for updates, as one edition after another rolled off the presses of all six of Toronto’s dailies and frequent bulletins were provided to the assembled crowds. The Star provided a glimpse of the hectic scene at its King Street West office:

All morning long the telephones in the Star office buzzed with inquiries as to the big marine disaster, and the same story is told by all the marine and shipping offices in the city…Scores of persons who had relatives or friends due to sail from the Old Country about this time, were most anxious, and telephoned repeatedly for news. However the news that all the passengers had been taken off in safety was a great relief to anxious enquirers.

The interest of the public in the wreck of the world’s greatest steamer was evidenced by the rapid manner in which the early “extras” got out by the papers, were sold, and the way in which crowds clustered in front of the bulletin boards in front of the newspaper offices. Everywhere about the streets, in the shops, and on the cars, the wreck of the Titanic was the sole topic of conversation.

Within that conversation was anxiety around the fate of passengers with Toronto connections. Under a disclaimer of “many rumours wrong,” the Telegram attempted to verify stories of who was and wasn’t on the Titanic. Among those who didn’t make the fateful voyage were businessman A.O. Beardmore (who booked but changed his mind), Mr. and Mrs. F.P. Wood (postponed their sailing by a week), and wholesaler William J. Denton (found alive and well in Medicine Hat). On the other hand, the friends and relatives of those known to have been on the Titanic ranged from relief that businessman Major Arthur Peuchen appeared to have been rescued, to fear about the uncertain fate of Eaton’s merchandise buyer George E. Graham.

It’s understandable that some inaccurate reports were published given the breakneck speed with which editions were published. Several papers boasted of breaking the story—the News declared it was first “as usual” in its April 15, 1912 edition, a claim the World disputed the following day:

When the bulletin came from Cape Race at 4 o’clock yesterday morning, announcing that the Titanic was sinking following its collision with an iceberg, The World made the greatest newspaper “beat” in years. Shortly after thousands of extra editions giving particulars of the disaster were on the street and caught the early morning crowds.

Yet the optimism behind the earliest reports faded as April 15 wore on. By evening, it was clear that White Star Line officials had purposely promoted false hope—the Titanic wasn’t heading to Halifax, and most of its passengers wouldn’t be rescued. The Mail and Empire reported how Toronto reacted when the depth of the tragedy reached the city:

Fragments of the whole awful story spread through Toronto like wildfire. To one walking through the downtown streets it seemed grotesque to hear a knot of people on one corner commenting in subdued tones on the latest news, while a few yards further on a couple would be gaily arguing as to how much salvage the Virginian would claim for towing the Titanic safely into Halifax…All through the evening the morning newspapers’ telephone switchboards were taxed to their utmost replying to queries. Many refused to believe what was told to them by the switchboard clerks and insisted on talking personally to one or other of the editors.

Back at the King Eddy, Thorley spent the night answering phone calls from anxious citizens, providing relief to some, despair to others. Some of those inquiring refused to believe that the Titanic had sunk. Thorley wanted to believe the ship was still afloat, “but the speed required to reach her on time would be impossible in that ice-filled sea.” 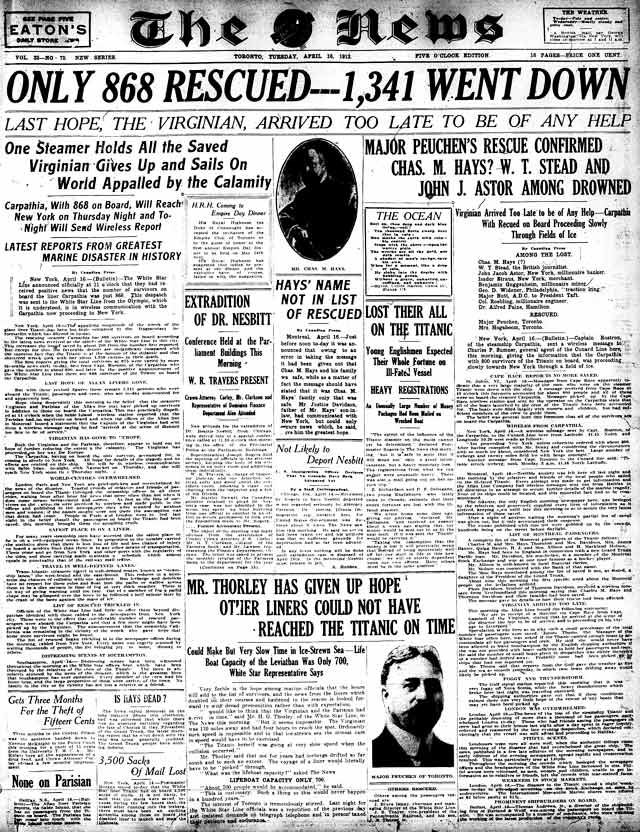 The city’s grim mood was reflected in the headlines on April 16, 1912: “The Greatest Marine Disaster in History,” declared the Globe. Over the next few days, pages were filled with grim details about the ship’s demise, especially after survivors arrived in New York. Regular updates were provided on the status of passengers with local ties and how their families were coping.

Local philanthropic impulses quickly kicked in. During a Board of Control meeting on the morning of April 17, 1912, Mayor George Geary proposed granting $5,000 to a relief fund for families of the Titanic’s officers and crew, and reflected the city’s strong ties to Great Britain:

As Britishers we should all feel proud of the reported conduct of the crew and officers of the Titanic in the awful disaster of last Monday. In the face of certain disaster, it appears that the crew calmly stood by and gave their places to the women and children, thus preserving the beautiful British traditions of the deep…It is possible that the relief will grow to large proportions with contributions from rich survivors, but my idea is that we should all take advantage of the opportunity in order to show our personal appreciation.

Geary’s motion passed unanimously. The “beautiful British traditions of the deep” he alluded to were repeated on the editorial pages, such as that day’s edition of the World:

With those who have suffered bereavement there is universal sympathy, all the more because at the hour of trial the victims upheld so nobly the highest traditions of the British mercantile marine. There are passive as well as active heroes, and the courage of those who accept and await death that women and children may take the one chance of escape is no whit inferior to that of the officers and men who brave the almost inevitable fate of a forlorn hope. Honor indeed to both, but not the least to the heroes of peace. 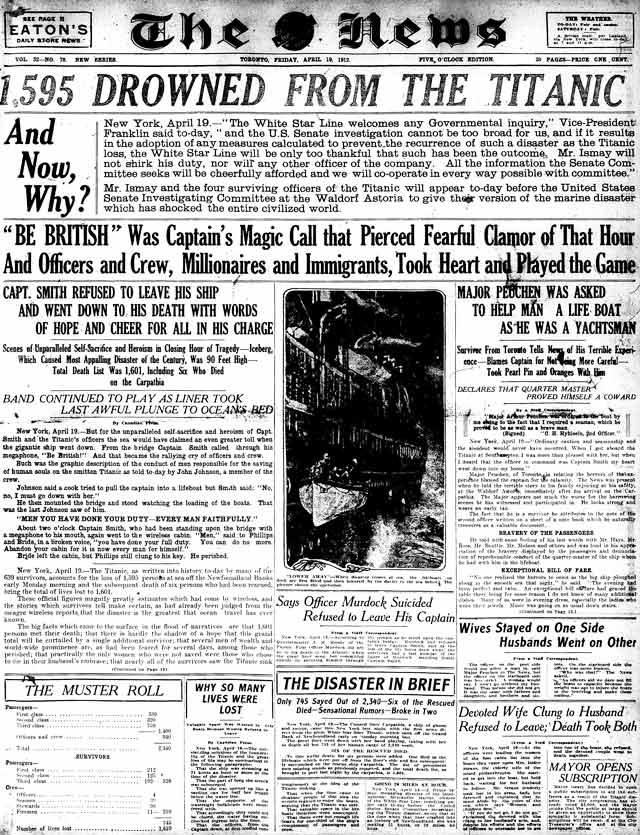 The city’s papers discussed the perceived cowardice of men who survived instead of nobly going down with the ship, even if they were asked to row lifeboats. Among those viewed with suspicion was Arthur Peuchen, despite his being pressed into rowing duty and his testimony as a star witness during the United States Senate investigation into the disaster. Peuchen endured insults like “He said he was a yachtsman so he could get off the Titanic, and if there had been a fire, he would have said he was a fireman.” Among his defenders was the Star, which felt he was prejudged for simply surviving and that “his conduct was not only above reproach, but that it was the natural course of a man of action, and was spirited and admirable.”

Even some of the women who survived earned scorn. The News interviewed local ladies a week-and-a-half after the sinking to see what they would have done under similar circumstances. While some thought there shouldn’t be any rules governing who should survive, others had definite ideas. “I think that the woman should base her conduct on the whether there were children at home or not,” said Mrs. Archibald A. Huestis. “If she had little children which needed her care, she should take to the boats. Otherwise, I think she should remain with her husband.”

As bodies were recovered from the disaster, memorials were held around the city. Eaton’s closed its Queen Street store early on April 20, 1912 in memory of George Graham, whose death was confirmed after several false reports of his survival. Church sermons the following day centred around the Titanic, with the largest service held at Massey Hall. 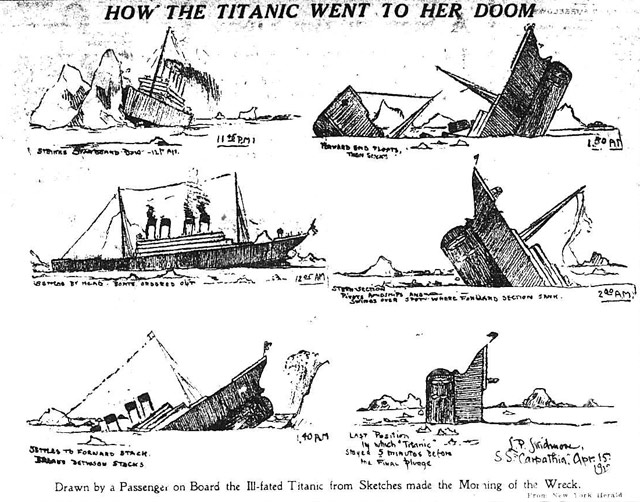 It was a Biblical story that the Telegram turned to when it summed up the Titanic disaster in an editorial: 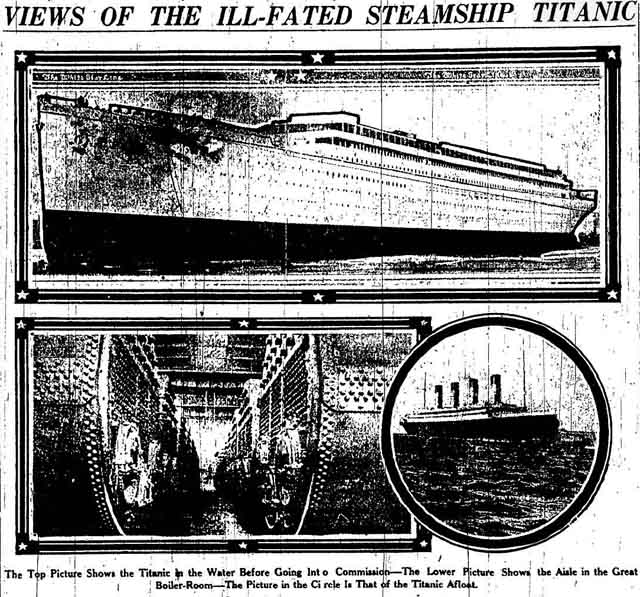 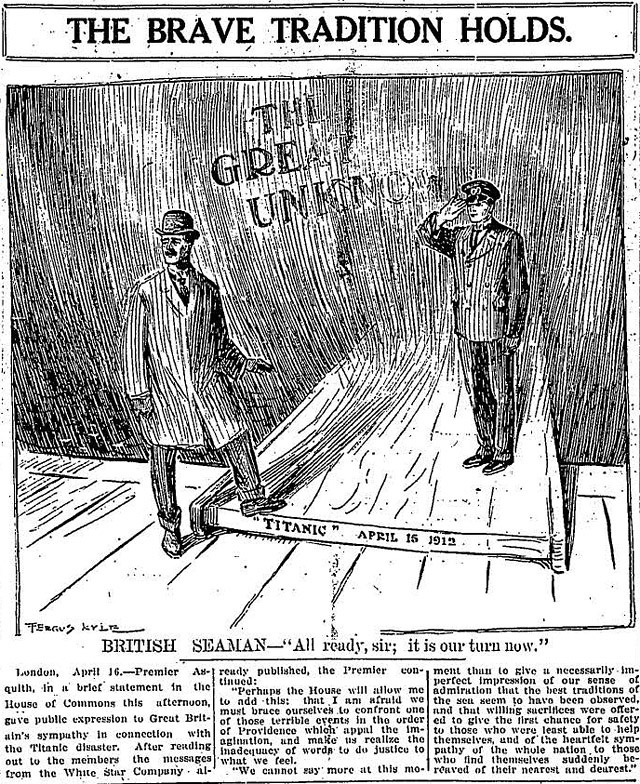 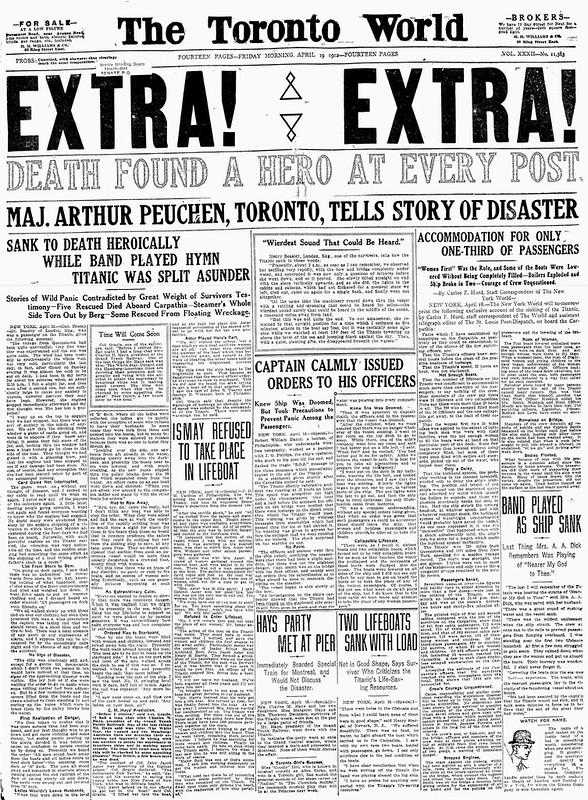 The original article made heavy use of front page images from the News. There were several reasons for that, ranging from it being a long-defunct newspaper to the quality of microfilm scans. The condition of most pages I looked at for this piece from other papers are in terrible condition, for reasons you’re about to see. Let’s call this a glimpse into the pitfalls researchers encounter. 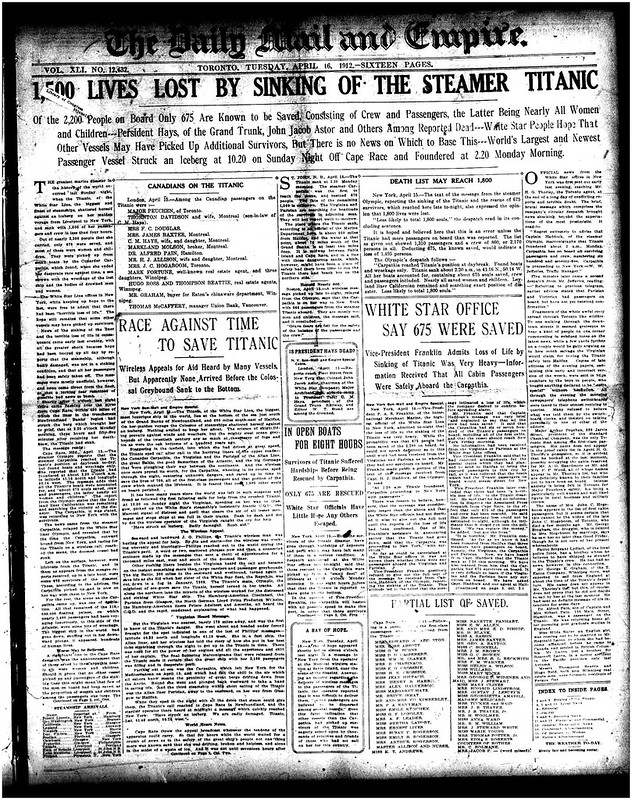 Without extensive use of Photoshop, this is the best quality microfilmed front page from the Mail and Empire as the tragedy unfolded. The rest are covered in varying degrees of black smudging. 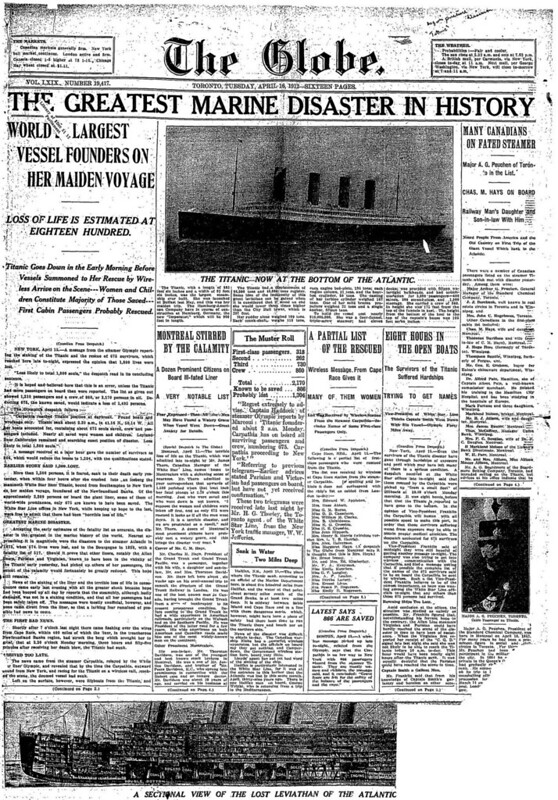 A chunk of this front page is gone… 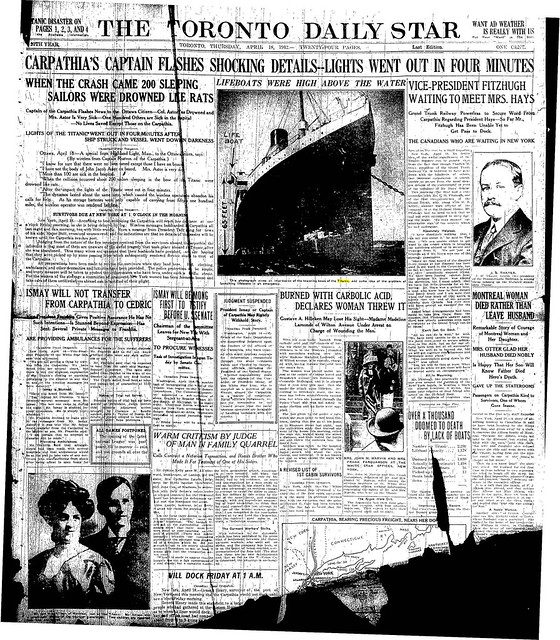 …while this one is missing even more. The previous day’s Star has a giant chunk missing from the middle of the page.