Originally published on Torontoist on June 30, 2015. 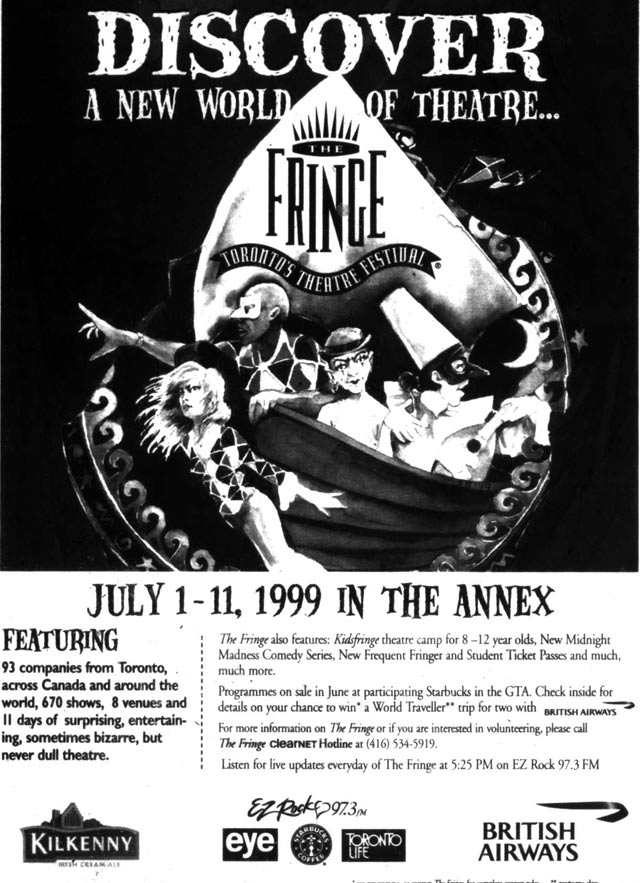 Three months before the 1999 Toronto Fringe Festival opened, new artistic director Chuck McEwen received an unpleasant surprise: a call from the owner of the building where the festival’s offices were located indicating the summer event had to find a new home. “That was an unexpected and high-pressure situation,” McEwen told the Star. “We had such a small amount of time to actually find a space and then move. And it’s difficult finding office space in the Annex area that fits our current budget. So it was tense.”

Quarters were found at Bloor and Spadina, and the festival rolled on. Over 11 days, 93 shows were presented. The best known, The Drowsy Chaperone, was promoted as coming from “the co-creators of Honest Ed! The Bargain Musical.” Having evolved from a stag party, the show earned kudos during its run at the George Ignatieff Theatre. “You’ll laugh, you’ll cry,” noted Now reviewer Glenn Sumi. “Well, OK, you won’t cry. But you won’t want to leave either.” The Star’s Robert Crew accurately predicted that, with a little reworking, “the potential is enormous and it will be back.” The show eventually won five Tonys for its Broadway run in 2006-2007. 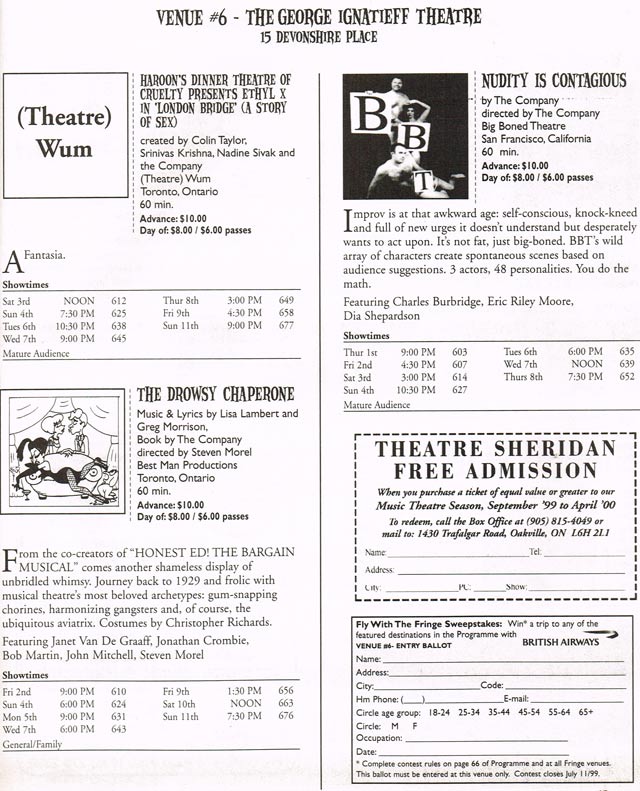 At least one other show had an extended afterlife. Chris Earle’s one-man show Radio: 30, about an ad voice-over artist, received universal praise. “Radio: 30 questions our gullibility and willingness to believe what we hear,” eye’s Kamal al-Solaylee wrote, “or at least what we want to hear. It constructs parallels between acting and advertising…with humour and brutal honesty.” The show returned for the festival’s 25th anniversary in 2013.

As with any Fringe fest, some titles were more interesting than others. We’ll let your imagination figure out the plots of Haroon’s Dinner Theatre of Cruelty Presents Ethyl X in “London Bridge” (A Story of Sex), The Tale of Baldrick the Sausage & Other Stories, The Fabulous Smokey Topaz Multimedia Extravaganza, and Wanda’s Visit and Business Lunch at the Russian Tea Room.

There were also those unfortunate productions which caused critics to hold their noses. For example, Now gave its lowest rating—one N—to three shows: Afterwards You Smoke (“you’ll want them to stand up, shut their mouths and quickly leave”); Broken (“a bathetic, broken record”); and The Dead Monkey (“an overextended, unfunny sketch that veers sharply into unbelievable melodrama”). 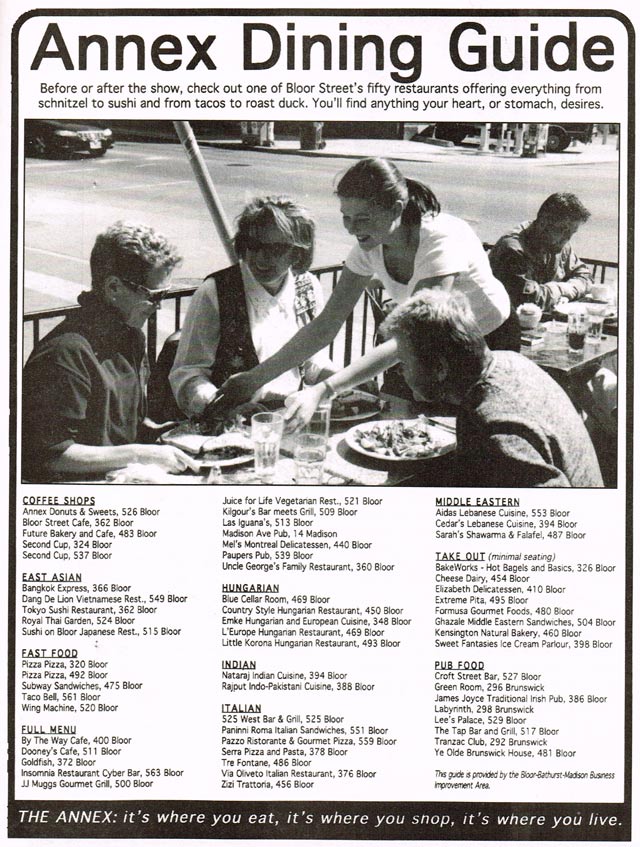 Keeners may count how many of the eateries listed in the ad above still feed Fringe attendees. It’s interesting to note the last gasp of Bloor’s days as an outpost for Hungarian food—within a few years, Country Style was the only survivor.