This story was originally published by The Grid toward the end of 2012. I don’t have the exact date, as it was one of those pieces which fell off the website before the publication folded for good. I don’t remember what the original title of this article was, though the sub-head probably mentioned Rob Ford during the period it appeared he might be tossed from office. 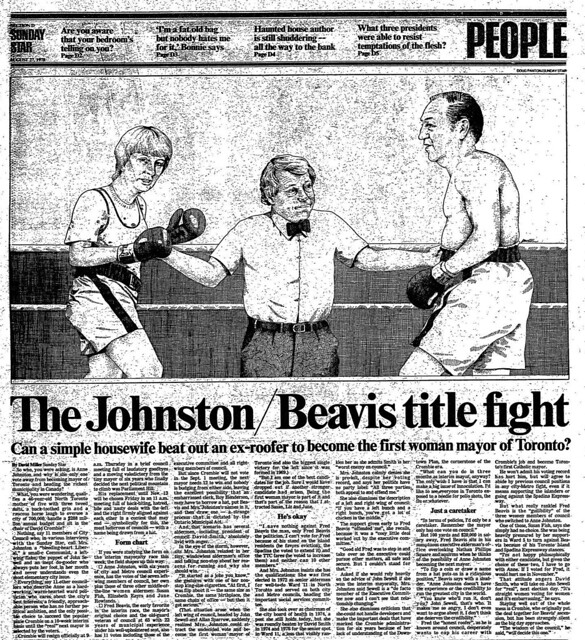 When Toronto city councillors voted for an interim mayor on September 1, 1978, the deadlock the media predicted came to pass. Candidates Fred Beavis and Anne Johnston had 11 votes each. Under the law, there was one solution to determine who would fill the last three months of David Crombie’s term: placing the contenders’ names in a cardboard box.

While it’s unknown if choosing Rob Ford’s successor will require the luck of the draw, the last time council filled a mayor’s term wasn’t due to a politician departing in disgrace. After six years at the helm, Crombie used an upcoming by-election in Rosedale to leap into federal politics. When he announced his bid for the Progressive Conservative nomination in March 1978, Crombie praised the public’s civic engagement during his tenure. “You can fight City Hall in Toronto,” he observed, “and if your point of view is sensible you can usually win.”

When Crombie officially submitted his resignation in August, the list of interim successors narrowed to two councillors. First elected in 1956, Fred Beavis was the longest-serving councilor and had sat on nearly all critical committees. The genial former roofer was backed by the Executive Committee and council’s right wing, and criticized for his support of developers, reviving the Spadina Expressway, and eviction Toronto Island residents. If chosen, he would be the city’s first Roman Catholic mayor. Beavis was favoured over Anne Johnston, who was first elected in 1972, served as the chair of the Board of Health for four years, and claimed to be the same height as Crombie. Her support came from the left and her fellow female aldermen, while criticisms included loose lips, lack of experience with critical issues, and a suspicion she was a puppet for mayoral contender John Sewell. If chosen, she would be Toronto’s first female mayor.

The decision was made during a tense 45-minute meeting. A proposal to adjourn and move into an informal caucus was quickly voted down. Official nominations were made for Beavis and Johnston. George Ben stunned his fellow councillors by declaring the process “asinine and an affront to the dignity of Toronto.” He criticized both candidates, declaring that Beavis was in it for “lousy reasons,” while Johnston was “a joke on the people of Toronto.” Ben nominated deputy mayor David Smith, who declined due to an informal agreement among councillors like himself who were running for mayor in the November municipal election not to seek the temporary position. Ben continued to fume, pointing to 40 civic employees watching the meeting who were indulging in “a rather disgraceful waste of taxpayer’s money.” 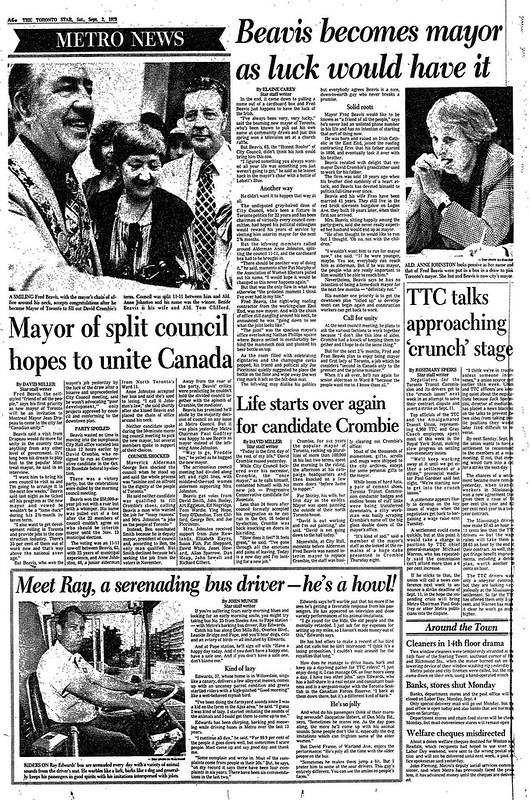 When the open vote split evenly, out came the cardboard box. The winner was drawn by Pat Murphy of the Association of Women Electors, who had covered council meetings for two decades. When Beavis’s name was pulled, it continued his recent good luck streak of winning church draws and community raffles. Johnston took her loss gracefully—she successfully motioned council to unanimously approve the result, then draped the chain of office around Beavis’s neck. She later lost to Art Eggleton in a 1985 mayoral run and was defeated as a councillor by newcomer Karen Stintz in 2003.

While other councillors toasted him with champagne, Beavis leaned back in the mayor’s chair and, true to his blue collar image, cracked open a bottle of Labatt’s Blue. “I figured something you always wanted all your life,” he told the Star, “was something you just weren’t going to get.” The only major hiccup during the transfer of power was forgetting to grab a key to his new office before his first full morning on the job. Beavis fulfilled his duties without major incidents, and was re-elected to the council seat he would retain for another decade. Crombie easily won the Rosedale by-election, while Sewell succeeded Beavis in the mayor’s seat. 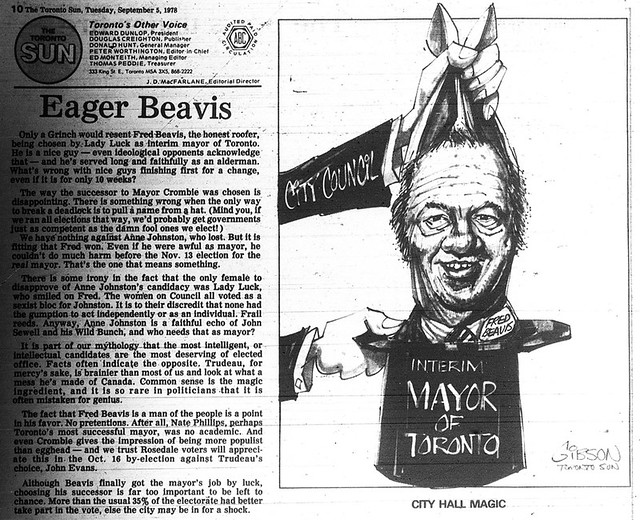 In a municipal election day editorial, the Star reflected there was nothing wrong with Beavis having been the sentimental choice for the job. “In his years on City Council, Beavis always displayed a compassionate consideration for people of all political persuasions and a warm sense of humour. He carried these qualities into the mayor’s office too…We enjoyed having you as mayor.” We shall see if these will be critical qualities for whoever replaces Rob Ford.

When Crombie first announced his intention to run for Parliament in March 1978, the Star spotlighted three councillors expected to seek the interim mayoralty: Beavis, Johnston, and Tony O’Donohue. “I ran for mayor in 1972 and drew 58,000 votes,” O’Donohue told the Star. “I’m not going to disappoint those people now and turn around and not run for interim mayor.” He also told the Globe and Mail that he was the “logical choice.”

Beavis, who had declared he would only go for the interim position and not run for mayor in that fall’s municipal election, was stunned by O’Donohue’s decision. “Tony once stated he would support me for interim mayor,” Beavis told the Star. “First I’ve heard of him changing his mind and I don’t know if it’s a change of heart or what. We’ve had no falling out and nothing changes my mind.”

Somewhere along the line O’Donohue focused on the municipal election, where he finished second in a three-way race with Sewell and David Smith.

“Beavis was not sophisticated, but was trustworthy in that he did what he said, and he was genuinely liked by almost everyone on Council.” – John Sewell, on favouring Beavis for his Executive Committee following the 1978 election.