This is an expanded version of an article which first appeared as The Grid’s “Ghost City” column on November 20, 2012.

During World War II, Montreal-based Park Steamship Company decided to name additions to its war cargo fleet after neighbourhood parks across Canada. Among those chosen were Hillcrest and Rosedale. Assigned to write historical plaques about each park, poet P.K. Page contacted Toronto civic officials for background information. Parks commissioner Charles E. Chambers provided Page the info she required, but noted at the end of a March 27, 1944 letter that “neither park has any historical importance.”

Chambers forgot Rosedale Park’s key role in Canadian football history. This might be understandable, as the Grey Cup’s debut there on December 4, 1909 was an anti-climatic affair. Fans and media expended their energy during the semi-final at the park the previous week, when the heavily-favoured Ottawa Rough Riders were trounced by the University of Toronto Varsity Blues 31-7 in front of a crowd of 11,000 spectators forced to sit 15 deep around the field. Among those playing for U of T were future Ontario chief coroner Smirle Lawson and future Ontario Rugby Union head Billy Foulds.

By comparison, only 3,807 spectators barely flowed out of the grandstand to watch U of T defeat the Parkdale Canoe Club 26-6. Though it was anticipated that the Parkdale squad would be steamrolled, a close score during the first quarter prompted headlines like the Star’s “Parkdale Gave Varsity an Interesting Argument.” The World observed that “the interest in the struggle was probably the least ever shown” in a football final. “Even the college contingent lacked spirit, and choruses led by the Highlanders’ band were half-hearted.”

There wasn’t even a trophy to hand to the victors; it took a series of frustrated letters from football officials to Grey’s staff to produce the $48 bowl made by Birks jewellers handed to the champs three months later. 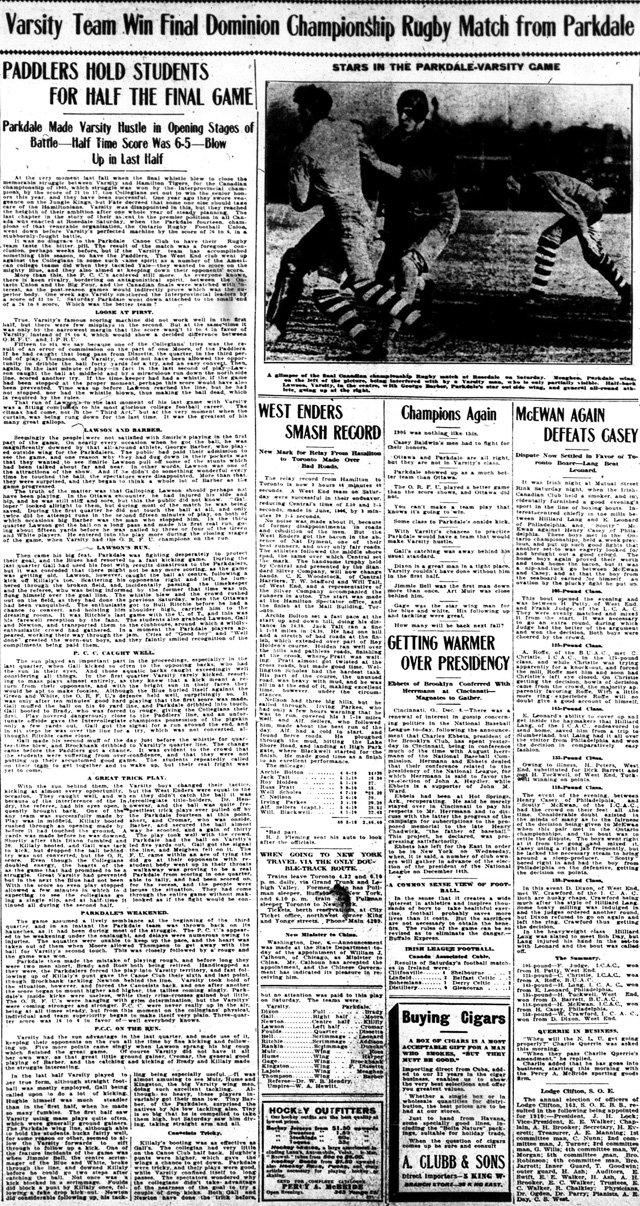 Rosedale Park’s association with athletics stretches back to May 24, 1892, when it officially opened as the Rosedale Lacrosse Grounds. “It is safe to say that the majority of those who attended the grounds yesterday for the first time expected to confront a bare open area, with a grandstand and high board fence as necessary adjuncts,” the Mail reported. “What they did see was a revelation. Five acres of beautifully levelled and sodded ground, broken only by an oval track of a third mile in circumference, by a picturesque club building, and by low division fences, was the scene immediately facing them.” The grandstand held 3,000 spectators, while another 2,000 people filled the grounds to watch Toronto fall to Montreal three games to two in the day’s lacrosse action.

Those disappointed by the home team’s loss during the debut lacrosse match found other distractions during the opening festivities. “The presence of a large number of Toronto’s most charming belles was a noticeable feature,” the Mail noted. “The galaxy of beauty which congregated on the grandstand was enough to turn the head of even the most experienced among the players.”

The site was purchased by the city from the Toronto Lacrosse and Athletic Association in 1917. Following the First World War it considered as a site for a new municipal stadium, but the location was considered too isolated. Arguments over the site’s suitability led to tons of wasted newsprint on the editorial pages of the Star and the Telegram. The grandstand disappeared, leaving more space for sports like cricket, high school football, ice hockey, lawn bowling, and tennis. A few athletic organizations, like the Toronto Track and Field Club, wore out their welcome with neighbours and city parks officials. Despite being denied a permit to continue practicing running and pole jumping on the grounds in 1951, the “Red Devils” continued to use Rosedale Park. Living up to their nickname by hurling “ungentlemanly remarks” at park staff and hanging around the fieldhouse after closing time didn’t help the group’s appeals to Parks and Recreation. After arrangements were made to move the club to Varsity Stadium, the pole vaulting pit was quickly filled in lest they return.

Most complaints about the park during the 1940s and 1950s were directed at the aging fieldhouse. Clubs battled for precious dressing room space—by 1950, women had to use a small lobby to change after a cricket club took over their quarters. The city rejected a request from the Highland Tennis Club to build an addition from fear other users would request their own extensions. Neighbours complained about smoke from the coal-fired building due to a lower-grade rock introduced during World War II continued to be used. The building was eventually replaced by the current clubhouse, which includes changing facilities and offices for the Rosedale Tennis Club.

One of the most tragic events in Rosedale Park’s sporting history occurred on October 25, 1960. During a football game against Jarvis Collegiate, North Toronto Collegiate halfback John Ellwood received a hard hit to the head. After continuing for two more plays, he left the field complaining of a headache. When his coach told Ellwood to tilt his head back, he slumped forward with a brain hemorrhage. Five hours of surgery followed at Wellesley Hospital, but Ellwood never regained consciousness, remaining in a coma until his death in 1972.

The park remains a central part of North Rosedale’s leisure time. For decades it has hosted the Mayfair community celebration. Twenty-first century upgrades include new playground equipment and a revamped historical plaque honouring the first Grey Cup. If he had been on hand for the plaque’s unveiling, Charles Chambers would have eaten his words about the park’s lack of history.

Some weeks while working on Vintage Toronto Ads my mind overflowed with ideas. Others, whether due to brain fog, a heavy load at my then day job, or a hectic personal life, produced ridiculously short pieces I’m amazed the editors accepted. Rather than give all of those pieces their own posts, I’m collecting them in batches such as this.

Originally published on Torontoist on July 29, 2008.

While P. Jamieson tried to raise a ruckus with their dare to the dozen or so other dry goods retailers located in the vicinity of Queen and Yonge, two competitors would have the last laugh—T. Eaton and R. Simpson expanded rapidly after 1883, with the early versions of their landmark stores in place by the end of the 19th century.

Who Are the Educational Trustees in Your Neighbourhood?

Originally published on Torontoist on September 2, 2008.

With today marking the first day back to school for most students in the city, we take this opportunity to let parents know who runs the institutions that will mould your children into upstanding young citizens…or at least the people who ran the show in Leaside 50 years ago.

Founded in 1920, the Leaside Board of Education operated out of Leaside High School by the time today’s ad appeared. Besides the high school, the board’s responsibilities in 1958 included three public schools (Bessborough, Rolph Road, Northlea) and one separate school (St. Anselm). The board merged with East York’s educational overseers when the two municipalities amalgamated in 1967.

Do 1010 Ads Use Stereotypes? We Need to Talk

Originally published on Torontoist on January 27, 2009.

The provocative stunt-based advertising campaign currently employed by CFRB has been one of Torontoist’s favourite targets for ridicule. This prompted us to dig deep and see if “Ontario’s Family Station” had any promotional skeletons in the closet, as most old CFRB ads we have encountered tend to be warm and friendly.

You be the judge as to whether this pair of ads, one designed to tout the station’s potential reach during the city’s 125th anniversary, the other meant to draw in Argos fans, retain the quaint, humorous charm the ad designers intended or demonstrate how attitudes towards First Nations people and leering football players have changed since they were published.

Look for representatives of either of these groups holding signs for the station on a street corner near you.

Originally published on Torontoist on February 3, 2009.

Most ads for restaurants tout the eatery’s virtues (smart decor, well-prepared food) or highlight special offers. Less common, unless the restaurant has bought ongoing advertorial space, are spots where the owner takes a stance on burning issues of the day. Ads for Oliver’s in community papers usually highlighted the menu, but today’s pick tackles the economic problems of the early 1980s with the subtlety of a talk radio caller, though modern callers would not tack on an apology to those who enjoy statutory holidays.

Opened in 1978, Oliver’s was the first of a series of restaurants Peter Oliver has operated in the city on his own and as part of the Oliver Bonacini partnership.