This installment of my “Retro T.O.” column for The Grid, which launched the series, was originally published online on March 20, 2012. As the original introduction put it, “introducing Retro T.O., a new series where we revisit key moments in recent Toronto history that still reverberate today.”

Sticklers may notice I’m not republishing these in any particular order. You may continue to stickle (which turns out to be a word!)

To those assembled at the corner of Black Creek Drive and Eglinton Avenue, August 25, 1994 was a great day for the future of Toronto transit. A group of shovel-wielding dignitaries led by Ontario Premier Bob Rae broke ground on the Eglinton subway, a project that had been discussed for nearly three decades. Rae, whose York South riding would be served by the 4.7-kilometre, five-station line running from Black Creek Drive to Allen Road, touted the thousands of construction jobs required to build the subway before its planned opening in 2001. City of York officials were all smiles, especially Mayor Fergy Brown, who told reporters he was “busting my buttons with pride” that the municipality finally had its own rapid-transit system. If all went well, the future promised an extension from Black Creek to Pearson International Airport.

Despite the enthusiasm of the line’s backers, opposition rose from the Eglinton West Subway Committee, a group of businesses dreading the impact of construction on their livelihoods. Their fears echoed those expressed in response to every large-scale transit project Toronto has ever built, such as the “St. Clair Disaster.” “We’ll have a loss of parking,” local resident Elaine Chee told the Star. Fearing “traffic jams, noise and dust,” Chee believed the disruption would create a “loss of business and loss of jobs.”

Though work moving utilities and digging Allen station caused some headaches, fears of a neighbourhood apocalypse were unfounded. On July 21, 1995, the new Progressive Conservative government announced $1.9 billion in cuts to education, infrastructure, job training, and social services. Among Minister of Finance Ernie Eves’ statements: “We will proceed with transit projects in a phased approach, beginning with the Sheppard line in Toronto. We are deferring the Eglinton West project until the province and Metro Toronto have sufficient funding to proceed.” 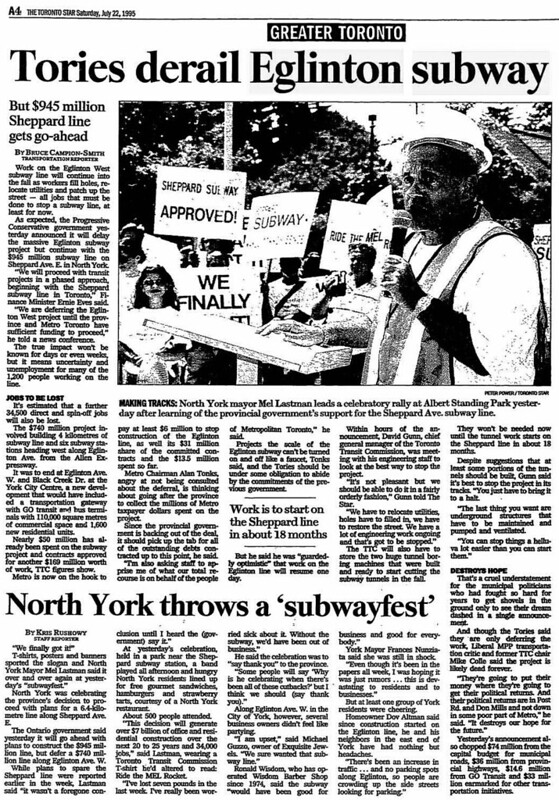 The preservation of the more expensive Sheppard line struck some observers as purely political, as if the Tories gave Rae the finger and punished City of York voters for rejecting the party at the polls. By contrast, voters along the Sheppard line provided the new government with its attorney-general, Charles Harnick. It didn’t hurt that Sheppard’s loudest booster, North York Mayor Mel Lastman, was a longtime Tory. Provincial officials who insisted that the Eglinton line was merely hibernating sounded as convincing as a dead parrot pining for the fjords.

The deferral sat poorly with recently elected City of York Mayor Frances Nunziata, whose municipality was left with a $50-million hole in the ground. With the support of councillors she usually fought with, Nunziata pressed the province to honour all existing contracts for the subway before mothballing it. Local coalitions that fought the subway gave way to groups working to save it, led by businesses worried about the impact of growing traffic jams along Eglinton.

While officials in York were livid, next door in Etobicoke, Mayor Doug Holyday took the cut in stride. Believing the cuts in general were a positive thing, he felt slashing Eglinton was a fact of life necessary to compensate for NDP overspending. “There is a time when we will want to see the subway go all the way to the airport,” he told the Star, that time being when money was available.

Similar concerns have occurred over the course of the construction of the Eglinton Crosstown LRT line, especially through Little Jamaica.

You could play mad libs with this Toronto Sun editorial from July 22, 1995.

Originally published on Torontoist on May 7, 2010.

A subway train heading to Warden station, 1968 (likely around the time the eastern extension of the Bloor-Danforth line from Woodbine to Warden opened). Photo by Eric Trussler. City of Toronto Archives, Fonds 1567, Series 648, File 242, Item 7.

Public transit lines love leaving Eglinton Avenue at the altar. The courtship begins with a proposal to build a constructive relationship until a politician runs down the aisle to stop the wedding. The current controversy over whether the proposed Transit City LRT line along Eglinton will be delayed from its original target date, truncated, or built at all may sound like a broken record to longtime local-transit observers. Once upon a time, work started on an Eglinton subway line until it was axed by Mike Harris’s government in 1995. Among other proposals to build a service along Eglinton was one offered forty years ago that led a right-leaning daily to support the development of a “transit-oriented lifestyle” for Torontonians. The thoughts offered back then by the editors of the Telegram might be points to ponder for those now rushing to stop the ceremony.

October 1971 was a busy month for transit geeks. Ontario Premier William Davis unveiled grandiose plans for a series of never-realized pyramid-shaped residential and commercial complexes designed by Buckminster Fuller. They were to be constructed above a subway line in the “Spadina ditch” between Eglinton Avenue and Lawrence Avenue that was meant to house the cancelled Spadina Expressway. Over on Yonge Street, work delays on the northern extension of the subway from Eglinton to Sheppard mounted as labourers building the section around York Mills continued to strike when the contractor refused to provide an eighty-seven-cent-an-hour wage increase. Combined with community opposition, other labour issues, tunnelling errors, and indecisive management, the strike forced the TTC to reset the targeted completion date for the eighth time since work began in 1968 (the line opened in two stages during 1973 and 1974).

On October 25, North York council voted to ask the TTC to build its next rapid transit line on Eglinton Avenue instead of a proposed subway along Queen Street. Council also asked for feasibility studies into the use of railway lines for commuter services and into the possibility of providing an express bus service from the proposed Finch terminus of the Yonge subway extension to the airport. The chief selling point of an Eglinton line, at least to North York Controller Paul Godfrey, was that it would run through all six of the municipalities that made up Metropolitan Toronto.

The following day, the Telegram led off its editorial page with a piece about the Eglinton proposal, which it felt should be championed by Metro Council. That’s not to say that the Tely didn’t have some reservations:

We’re not impressed with Mr. Godfrey’s argument for an Eglinton subway on the grounds that Eglinton Ave. passes through every municipality of Metropolitan Toronto. It sounds too much like the kind of parochial politics that judges elected representatives by the number of public works they can win for their constituencies.

Subways and other transit facilities shouldn’t be located on any such basis. They should be planned to meet present and future need and to promote future growth in areas where it is most suitable and will be most beneficial.

Putting aside politics, the paper felt there was a strong case for building along Eglinton.

Eglinton Ave. is situated close to the centre line of Metropolitan Toronto. It has already been the focus for tremendous apartment and office building development both east and west of Yonge St. It will undoubtedly continue to attract more development in the centre and at both ends.

One rapid transit line, the Yonge St. subway, already crosses it. The projected Spadina line will, hopefully, soon do so. An Eglinton line could serve as a feeder from Scarbor[ough] and East York on the east and York and Etobicoke on the west to the Yonge and Spadina subways for transfers south to downtown or north to Yorkdale and Willowdale.

In its first stage, the Eglinton line should probably extend from Victoria Park Ave. on the east to at least Dufferin St. on the west. Plans should be made at the beginning, however, and right-of-right be acquired wherever possible for its eventual extension to the eastern boundary of Scarbor[ough] and to Highway 27 in Etobicoke.

As for the province’s role in building this line:

As part of its Toronto-Centred Regional Plan, the Ontario government intends to encourage development to the east of Metro Toronto. It can do this by heavily supporting the early extension of the Eglinton rapid transit line eastward to the Pickering boundary and eventually beyond it. Development follows transit and transit can be used as a useful tool to influence the direction and extent of development.

Recent projections give Metropolitan Toronto a population of 6 million by the year 2000. This figure can be questioned on many grounds and has been disputed by people who would limit growth of the city in favour of improving the quality of city life.

The two goals don’t have to be mutually exclusive. Good planning can accommodate controlled growth while improving the city environment. Good planning favours an Eglinton subway as a facility suited to the transit-oriented lifestyle that we hope will develop during the next two decades in Midtown Toronto of the future.

An earlier map of the TTC’s vision for rapid transit in Metropolitan Toronto. Note that extensions to the two existing subway lines are the only confirmed projects. Notice any other projects that are echoed in Transit City? The Telegram, February 4, 1969.

Outside of North York, reaction from other Metro Toronto leaders was cool. TTC Chairman Ralph Day felt an Eglinton line had merit but it was too early to make any decisions. Toronto Mayor William Dennison preferred a line along Queen or King to service anticipated developments along the waterfront. In East York, Mayor True Davidson didn’t roll out the welcome wagon in an interview with the Star:

Sure it would be good for East York and other boroughs, but for Metro as a whole, it wouldn’t help. The Eglinton line wouldn’t do anything at all for the CNE or the planned Metro Centre on the waterfront, or anyone in the southeast areas…Giving priority to it is all based on the assumption that people will gravitate north, and I would be really surprised if this really happened.

The full version of the Telegram‘s editorial from October 26, 1971.

As for the Eglinton LRT, construction began in 2011. Now dubbed the Eglinton Crosstown (or Line 5), service is expected to begin in 2021.