Originally published on Torontoist on November 11, 2008.

One activity that today’s remembrances of those fallen in war might prompt is a look through boxes in attics and archives for letters sent home by those on the front lines. As demonstrated in a series currently running in The Globe and Mail, these letters provide a snapshot of what it was like to be caught up in conflicts far from Canada. In these documents, the joy at receiving small pleasures of life from home stand out, whether it’s a shipment of candy bars or a newspaper clipping announcing a friend’s wedding.

Here is one of those letters, sent by a Toronto fighter pilot (my great-uncle) to his family during the early years of World War II.

Douglas Morrison Waldon, known as “Morrey” to friends and family, was born in Deer Park in 1914, one of five children of a TTC conductor. After graduating from the Toronto Normal School, Waldon worked for Royal Trust for five years before his dreams of flying led him to sign up with the Royal Canadian Air Force in 1940. After several months of training at Uplands near Ottawa, Waldon was sent over to England in February 1941 and served as part of No. 403 Squadron.

Waldon composed a steady stream of letters, including this one for his older sister Helen (my grandmother). Military censorship prevented any descriptions of his flying activities, but the letter is rich in details about items sent from home and hijinks that made life bearable. There is a strong sense of how he misses everyone at home, especially when he writes about the family garden back in Deer Park.

Dear Helen, Lorne & all the family,

The weather here has been quite bad for the past few days, so we had a rest from flying. It is now 3:30 P.M. and I am sitting in our Flight Dispersal Hut as I write this letter. I had hoped by this time to have some pictures to send to you, but I have had only one roll developed as yet. However, I hope to have some ready for my next letter. The mailman was very good to me this past week and I received 4 letters from Phil, two from Dad and one from Jack [younger brother]; and last but not least an elegant parcel from Hartley [older brother]…In case the rest of you don’t know what was in the parcel Hart sent me, I will tell you. 20 packages of Wrigley’s gum, 25 chocolate bars, a case of Planter’s Peanuts, two films for my camera, razor blades, toothpaste, toothbrush, two pads of this writing paper and a lovely pair of socks which I think were Lot’s handiwork [Hartley’s wife]. Opening that parcel was almost as good as Christmas and I was certainly very, very grateful for it. The chocolate bars lasted for one afternoon and evening and were enjoyed by all. My roommate and I [and] a Scotch lad we call “Haggis” finished the peanuts and a box of marshmallows the same evening. As a result of my indiscretion and not controlling my fingers, I am sporting 3 lovely cold-sores, which would make Bea [older sister] very unhappy if she could see them.

I am glad that you reminded me about my Air Force Pin which I had quite forgotten, It is on my greenish shirt in the clothes closet of what was your room at home. I am not sure but I think that is on the trousers above the watch-pocket. It is also possible that it is on my sports coat. You are very welcome to it.

From all reports, the garden at home must be really something to see this year [and] I would like very much to be sun-bathing there right now. There are lots of delphiniums around here which remind me of home. We have several large beds of beautiful roses around our mess here and we have fresh roses on the mess dinner table each day. They certainly help to make the dining room pleasant, along with the W.A.A.F. waitresses. I was pleased to hear that the front yard has been freshly sodded & if it gets lots of water it should make a great improvement.
I don’t think you need to worry about me over-drinking but I do like to join the boys occasionally on a pub-crawl as often times there is nothing else to do. However, I am not a confirmed drunkard or anything like that.
Your good wishes for promotions for me are appreciated Dad, but from now on they are very slow [and] rather hard to get.

Last Wednesday, I was invited out for dinner and an evening of tennis, both of which were very enjoyable. As a result of meeting a very nice girl that evening I was invited to a super party on Friday night. The evening started with a cocktail party and then we went on to the home of a Lady Somebodyorother for dinner and it was the best dinner I have had since coming to England, bar none. After dinner we went to a lovely country club where there was dancing and supper until 12:30. The dance was a real good one and there was an outdoor swimming pool for those that became overheated. I got to bed around 1:45 and so I had to get up again at 4:30 that morning. I was very tired. I had also volunteered to do late readiness for one of the boys going on leave last night, so the inclement weather pleased me very much. The girl I was with is the daughter of a banker in a nearby town. She is tall, dark, devastating and very, very interesting. Perhaps she will want my picture. Woo! Woo! Dogpatch style [a reference to the popular comic strip L’il Abner].
My R.A.F. life has been much the same as in previous weeks so there is nothing new to report there. It is hard to believe that I have been away from home for five months and I must say that time is going very, very quickly.
It is time to say good-bye now. Best regards to all the family and lots of love.
Morrey

P.S. Thanks again for the parcel.

This proved to be one of the last letters Waldon sent. Three days after his father received a note indicating that all was well, the family was informed that he had gone missing while piloting a Spitfire fighter over France on August 9. Cables from the International Red Cross over the next month indicated that he was a prisoner in a German hospital. In mid-September, the family was informed that Waldon had died of injuries soon after he was shot down over Gravelines.

When interviewed by The Toronto Star, his father noted that “it was a great disappointment to us. Douglas was a strong and healthy boy and after five weeks passed we had high hopes for his safe recovery.” Waldon was buried in the British Commonwealth section of the Longuenesse (St. Omer) Souvenir cemetery. Back in Toronto, a service was held at Christ Church in Deer Park soon after his death was announced. He was one of six fallen parishioners remembered at the church’s Remembrance ceremony that November.

Additional material from the August 11, 1941 and September 13, 1941 editions of the Toronto Star and the Telegram. 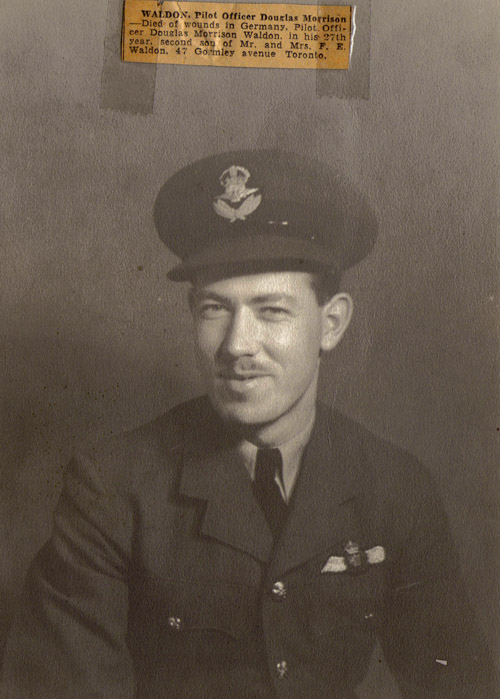 The material I used for this story comes from a box which belonged to my paternal grandmother. It contains photos and newspaper clippings stretching from the 1920s through my first regular media gig, a monthly highlight column for my elementary school written for the Amherstburg Echo when I was in grade 8. Much of the material is World War II vintage and revolves around my great-uncle Morrey.

This is the notice that appeared in the Toronto Star on August 11, 1941, when Morrey was reported missing. A similar story appeared the same day in the Telegram. The loss was devastating to the family. His name lived on among several nephews, including my father, who was given Douglas as a middle name when he was born the following year. Morrey was one of 26 airmen honoured by the city in a Remembrance Day ceremony the year after he died. 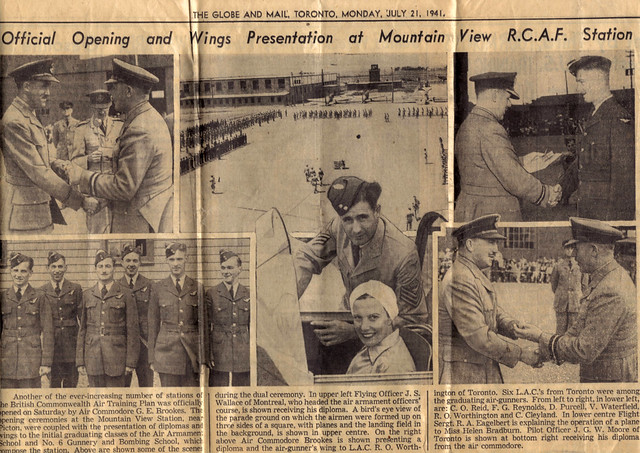 While he was overseas, it appears the family journeyed east to attend the opening of an RCAF station in Prince Edward County. My grandmother is getting a crash course in how to operate a plane in the middle picture.