This installment of my “Retro T.O.” column for The Grid was originally published on June 5, 2012. 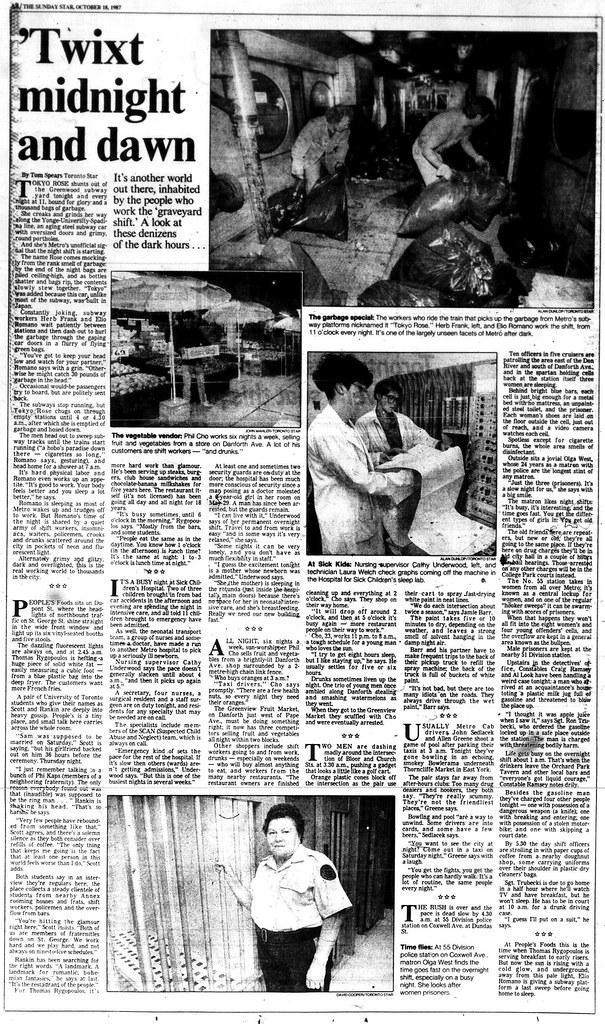 Patrons intending to dine at People’s Foods on Dupont Street were greeted last week with a notice on the door stating that the half-century old diner was closing due to its lease expiring. Though one report suggests that the owners hope to find a new location, for now, regulars will have to look elsewhere for greasy-spoon staples and jukebox selectors at their booths.

A quarter of a century ago, People’s was among the “denziens of the dark hours” that the Toronto Star spotlighted in an article on life in the city between midnight and dawn. A 24-hour eatery at the time, People’s saw an early-morning procession of shift workers, police, and frat boys grazing on homemade burgers and onion rings. “The dazzling fluorescent lights are always on,” the Star noted, “and at 2:45 a.m. Thomas Rygopoulos is hefting a huge piece of solid white fat—easily measuring a cubic foot—from a blue plastic bag into the deep fryer. The customers want more French fries.” Rygopoulos had worked at People’s for five years when the Star visited. “People eat the same as in the daytime,” he noted. “You know how 1 o’clock is lunch time? It’s the same at night: 1 to 3 o’clock is lunch time at night.”

Among the diners were two University of Toronto students discussing a major crisis: An acquaintance about to be married had his bride-to-be back out 36 hours before the ceremony. Amid silent pauses over numerous refills of coffee, they contemplated how to rebound from such a situation. At least one of the students seemed to have problems of his own, as he told his friend, “the only thing that keeps me going is the fact that at least one person in this world feels worse than I do.” Both men noted they were regulars at People’s—one described it as “a landmark for romantic, bohemian fantasies … It’s the restaurant of the people.”

People’s wasn’t the only food-related stop on the Star’s late-night tour. On Danforth Avenue near Pape, Phil Cho sold produce at the Greenview Fruit Market. When asked who bought oranges at three in the morning, he replied, “taxi drivers. There are a few health nuts, so every night they need their oranges.” He also found that drunks would eat just about anything that caught their eye, even if it meant a smashed watermelon or two. Restaurant and shift workers tended to cause less chaos, as their purchases tended to head home.

There might have been items bought at Greenview among the debris that “Tokyo Rose” took care of nightly. The TTC’s subway-cleaning car derived its name not from the World War II axis propaganda agent but from the city it was manufactured in and a mocking reference to the sweet smell of garbage. Cleaner Elio Romano referred to the subway tracks as a “hobo’s paradise” due to the longer-than-average cigarette butts he tossed into his garbage bag.

The article ended with a glimpse of dawn at People’s, where Rygopoulos prepared breakfast for early birds. The creatures of the night had moved on to give way to those facing a new day, much as the restaurant’s home since 1963 may now face a new morning.

Sources: the October 18, 1987 edition of the Toronto Star. The site was soon occupied by Rose and Sons restaurant.

Originally published on Torontoist on April 22, 2015.

When the Kiriakou family took over the Wexford Restaurant in May 1958, they likely had little idea that nearly 60 years later a sign in their parking would proudly boast about the billions of eggs cracked and oranges juiced. Under three generations of family ownership, the restaurant has fed plenty of hungry Scarberians and, in the process, became a local institution.

Kiriakos “Jerry” Kiriakou emigrated to Canada from Vevi, Greece around 1950. Over the course of the next few years he gradually brought over the rest of his family. Saving money earned through dishwashing, Jerry bought a fish-and-chip shop on the south side of Lawrence, but felt that Wexford Heights Plaza on the north side presented a better opportunity. When the 50-seat Wexford Restaurant was put up for sale, the family purchased it, with Jerry’s sons Tom and Anthony in charge. Two decades later, having built up substantial real estate holdings elsewhere in Metro Toronto, the family bought the plaza.

Through three generations of Kiriakou ownership, the restaurant has expanded to 300 seats. Among the additions was a dining lounge opened in 1983 that was named in honour of Jerry (who is also memorialized with a plaque). The family name was also bestowed on a residential street near Lawrence Avenue and Kennedy Road, located just off Mike Myers Drive.

While surveying diners across the city in 2000, Star writer Jon Filson gave a sense of the hubbub during a busy weekend at the Wexford.

Breakfast at the Wexford Restaurant in Scarborough is the best time anyone can have anywhere. At noon on Sunday the background buzz is louder and at least as entertaining as a patrol car’s squawk box on a Saturday night. Calm, firm waitress voices take charge: “Ordering over easy, with sausage and brown,” but occasionally a more urgent shriek comes through: “Johnny, I said ham with that, Johnny! Ham, Johnny, ham! Johnn-eeey…” Most of the voices come in bits and pieces, garbled by the sizzle from a massive grill manned by four heroic cooks wearing peaked white caps. Giddy customers are filling stools and packing into booths, and the whole bustling place seems totally out of control, without ever being out of control in the slightest.

Customers and staff have long shot the breeze over the topics of the day, which has made the Wexford a popular spot for campaigning politicians. When mayor Mel Lastman visited in November 2000 to boost the re-election hopes of Lorenzo Berardinetti in Ward 37 (husband of current Ward 35 councillor Michelle Berardinetti), the incumbent councillor observed that “he’s not here to make speeches or unveil a moose, he’s just having some eggs and meeting people doing the same thing.” A picture taken of Rob Ford holding up a paper coffee cup during the 2010 election campaign found a place of honour on a pillar near the cash register. During the 2014 mayoral race, the Ford brothers ran their local headquarters in the plaza a few doors down from the restaurant.

As the National Post’s Peter Kuitenbrower put it during anniversary celebrations in 2008, the Wexford is “a centre of Scarborough power and Scarborough pride.”

Originally published on Torontoist on January 8, 2013. Additional ads have been included.

How many downtown office workers followed the Sheffield chef’s advice and saved the advertisement? Perhaps they kept a copy in a safe corner of their desk, or stuck it in a visible location. How could a devoted clerk or number cruncher not appreciate the efficiency of a dining establishment devoted to maximizing its customer turnover?

Opened at the southeast corner of Yonge and Adelaide Streets in 1915, many of Sheffield Lunch’s ads promised Torontonians “good food well cooked and quickly served.” The busy eatery kept its costs low by having customers pick their dishes themselves, instead of being waited on. A 1919 ad assured women that self-service enabled them “to select numerous dainty things on display” and eliminated “the tipping nuisance.” Male customers were enticed by a large basement room which provided “a suitable place for the men who like a smoke after their meals,” but who didn’t want to annoy non-smokers on the main floor.

Any spending the owners did, according to Sheffield’s ads, was only to prevent the restaurant from falling into a rut. Take the purchase of new kitchen equipment and a 20-foot-long steam table in early 1918. “This was done for two reasons,” the restaurant claimed, “namely to be able to serve quicker and to serve the orders hotter, as we realized that is the fault with most eating places.” If true, this doesn’t say much for the state of Toronto dining during World War I.

Management must have had grand visions, as the company made a stock offering in March 1920 with the goal of opening additional locations. Sheffield’s second restaurant, located on King Street across from the King Edward Hotel, had grand ambitions when it opened in 1922. Besides the lunch room, the three-floor complex offered a grill room, a “high class” tea room, and a full-service restaurant.

However, Sheffield’s boast that “no restaurant ever opened under more favourable auspices and with greater surety of success” rang hollow. Having blown nearly all its money on décor and fixtures for the King Street location, the company asked for an extension from its creditors in November 1922. Two months later, a trustee closed the restaurants. Any ads lingering around office desks were tossed away.

A selection of Sheffield Lunch ads that were left on the cutting room floor:

Originally published on Torontoist on January 13, 2009.

With temperatures predicted to plunge into extreme cold weather alert territory this week, there may be a corresponding rise in the number of people seeking comfort in a warm, nourishing bowl of soup. Half a century ago, Fran’s offered a full lineup of soups priced “sensibly” for those looking for a cheap bite or as an appetizer to add refinement and enjoyment to their meal (though one wonders if “Fran’s Plantation” would now be “homestyle beef” or “minestrone”).

G. Francis (Fran) Deck opened a 10-stool diner on St. Clair Avenue west of Yonge Street in 1940 after spending two decades working for his brother’s restaurants in New York State. While the banquet burger appears in embryonic form as a “Forest Hill” on the restaurant’s original menu, their signature rice pudding appears to have been a later addition.

Part of Deck’s early success was fuelled by being one of the few restaurants north of Bloor open on Sunday, which drew the pre-/post-church crowd. Within a decade he operated four locations around the city, offering economical comfort food at all hours of the day. Among the regular patrons at the original location was nearby resident Glenn Gould, who dropped by in the wee hours each morning to down an order of scrambled eggs.

Upon its 50th anniversary, Rosie DiManno wrote about the mystique that surrounded Fran’s as she grew up:

Some of us have always been rather curious about Fran’s beloved reputation since its everyday menu is pretty much a paean to edibles bland and banal (although fairly appetizing at 3 a.m.). Besides, for those of us who grew up in Toronto, venturing up to the Yonge-St. Clair neighbourhood was akin to penetrating the heart of Waspness.

By the time Deck died in a roadside accident while on vacation in Arizona in 1976, the four locations served more than 2.5 million meals a year. Some of those customers distressed Deck in his later years, including the increasingly gay clientele looking for love at the College-Yonge location—he noted in a Toronto Life profile, “I used to kick them out—CBC people and everyone—and nearly wound up in court.”

Attempts to expand the chain outside Toronto to outposts such as Kingston and Windsor in the late 1990s led to bankruptcy, with all locations closed by 2001 except for College-Yonge, which had been franchised off years earlier. It remains in business, along with two other locations that opened this decade.