Originally published on Torontoist on October 13, 2011.

An iconic image of Toronto: a photograph looking west from the intersection of Church, Front, and Wellington Streets, with the Gooderham Building (a.k.a. the Flatiron) as the focal point. The unusual skinny, triangular shape, which predated New York’s flatiron by a decade, was the result of the clash between Wellington Street’s adherence to Toronto’s square grid and Front Street’s looser paralleling of the 19th century shoreline. In the 120 years since George Gooderham first surveyed his business empire from his fifth floor office, the building that bears his family’s name has evolved into a Toronto landmark.

And it’s a landmark that theoretically could be yours. Current owner Woodcliffe started the bidding process this week to find the next custodian for the historical site, which provides an opportunity to look back at how it became one of Toronto’s most beloved buildings

Before the Gooderham Building was erected in 1891, another flatiron-shaped structure occupied the block. Consisting of three connected units, the structure was known as the Coffin Block due to its resemblance to the end of a funeral box. Among its tenants were a telegraph office, a stagecoach booking office, and additional guest rooms for the Wellington Hotel, whose main premises were located on the northwest corner of Church and Wellington.

Whoever archived this image determined that notes written on the side of the photo weren’t enough for future researchers.

Here’s a wealthy person the Occupy Wall Street movement might respect: when George Gooderham died in May 1905, he purposely left most of his fortune in the hands of the Ontario government. He decided against selling any of his stocks to anyone else due to his belief that it was unconscionable to evade provincial succession duties. The portion of Gooderham’s $25 million estate that the government received wiped out the provincial deficit.

Though Gooderham’s fortune was based on the Gooderham and Worts distillery, he built it through investments in banking, insurance, and railways. He was among the founders of Manufacturer’s Life (now Manulife), served as president of the Bank of Toronto (an ancestor of TD Canada Trust), and backed the construction of the King Edward Hotel. His philanthropic interests included key financial and managerial roles at Toronto General Hospital and the University of Toronto. 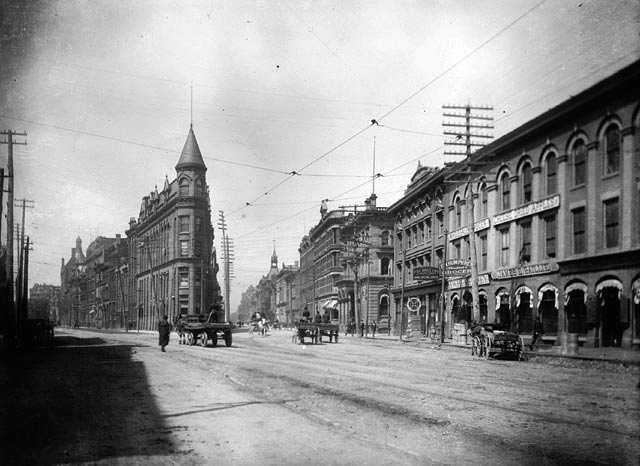 Architect David Roberts Jr. was no stranger to the Gooderham family when he was chosen to design the new building. Among his other commissions was Waveney, George Gooderham’s mansion at Bloor Street and St, George Street, which currently houses the York Club. To replace the demolished Coffin Block, Roberts designed a five-storey red brick office building trimmed with Credit Valley stone. Gooderham’s personal office was located at the top of the semi-circular tower in the front, where he could view of many of his business interests. Also included for Gooderham’s benefit was a tunnel under Wellington Street to the head office of the Bank of Toronto (now the site of Pizza Pizza).

The effect the building created was summed up by Patricia McHugh in her book Toronto Architecture: A City Guide (Toronto: McClelland and Stewart, 1989), “With a richly textured facade and kingly chateauesque towered roof that still dominates this busy corner, the building stands as an apt symbol of the Gooderham family’s powerful position in the community.”

Gooderham and Worts maintained offices in the building through the early 1950s. By the 1960s, despite its growing status as a local landmark, its future seemed in doubt. As plans evolved for a Centennial-related series of arts complexes in the neighbourhood, the buildings that occupied the rest of the Gooderham’s little island were razed for a temporary parking lot. By 1966, the orphaned building was the temporary headquarters for the St. Lawrence Centre for the Arts rising to the west. As the 1960s, the Gooderham provided office space for arts organizations like the Mendelssohn Choir, the Shaw Festival, and the Folk Arts Council.

But the Gooderham Building managed to survive in an era when one aging downtown building after another fell to the wrecking ball. New ownership in the mid-1970s poured money into renovations. Instead of building arts schools or small concert halls beside it, the City of Toronto approved the public space that officially opened as Berczy Park in 1975. That same year, the Gooderham Building was declared a historic site.

Two attempts were made to dress up the west wall, which had actually belonged to a long-gone neighbouring building. A mural of clouds painted by Daniel Solomon during the early 1970s was eventually covered over—allegedly the wall was too poorly prepared to handle the piece. Attempt number two began with a suggestion from the city’s heritage agencies that any future artwork should incorporate the architectural stylings of the surrounding 19th century buildings. A combination of commercial donors and funds from the Wintario lottery provided artist Derek Besant with $80,000 to come up with a durable piece of art. The result: 49 panels of a polyethelene-based construction material called Alucobond that formed a trompe l’oeil special effect of a wall curling at its edges.

Berczy Park looking east at the Gooderham Building, before and after landscaping. City of Toronto Archives, Fonds 200, Series 1465, File 623, Item 5.

When Besant’s piece was unveiled on September 19, 1980, the Globe and Mail’s John Bentley Mays called it “an engineering masterpiece and an artistic triumph that will be flying high on the Flatiron Building for years.” Two restorations later, the piece is as much a Toronto landmark as the building itself.

The building’s landmark status has grown with time. As larger office towers filled the skyline to the west, it has provided photographers with an interesting contrast of past versus present. The site has consistently been one of the most popular attractions during Doors Open. Any new owner would risk a public outcry if they messed with the flatiron shape or the well-restored building’s other unique attributes.

The building was purchased by Commercial Realty Group.

Editorial on what would become Berczy Park, Toronto Star, August 8, 1972.