Originally published on Torontoist on January 11, 2016. 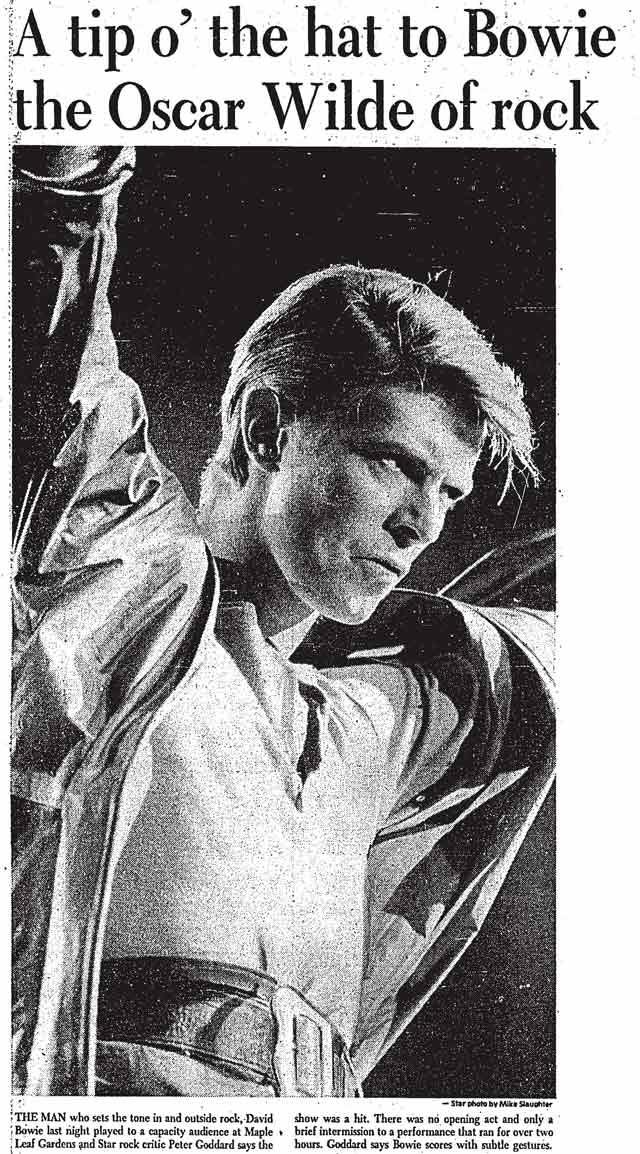 In the days to come, much will be made of how David Bowie influenced other artists. But appreciating such talent takes time, and, especially for someone who confounded mainstream culture when he gained fame in North America during his “Ziggy Stardust” phase, Bowie was initially viewed with a mix of bemusement and disgust by Toronto’s press. As our city’s familiarity with Bowie grew, the fandom that appreciated his many creative aspects and personas resulted in hot tickets for three concert tours here that stopped here during the 1970s, and captured Bowie at the height of his fame.

“The new decadence is not only ugly, it lacks class,” screamed the headline of a 1972 Globe and Mail article criticizing the growth of adult movies and glam rock. “In the seamy wake of Alice Cooper,” the paper observed, “have come drag rock groups with names like Queen and the New York Dolls and singers like David Bowie who, in his lipstick and hot pants and Jane Fonda haircut, is taking a new step in decadence.”

One of the earliest ads we found mentioning Bowie, featuring a giveaway of his 1970 album The Man Who Sold The World at a carpet store. Toronto Star, December 30, 1972.

Profiling several glam rockers for the Star the following year, Peter Goddard felt Bowie tempered some of the shock value of his orange hair and declarations of bisexuality through the strength of the songs on The Rise and Fall of Ziggy Stardust and the Spiders from Mars. “By not allowing their audiences to clearly identify their sexual distinctions,” Goddard noted, “the new performers have the freedom to be more bizarre and hence more effective showmen.” Asked about playing glam rockers like Bowie, CHUM-FM program director Bob Laine observed that “we never try to analyze who they are, but just what their music is. There has always been this kind of sheer shock value in the entertainment industry. Only now it’s receiving a greater amount of expression.”

Bowie’s first major Toronto appearance was a pair of shows at the O’Keefe Centre (now the Sony Centre for the Performing Arts) on June 16, 1974. These performances rounded out a glam-rock-filled weekend in the city, including concerts by the New York Dolls and Kiss (described by the Globe and Mail’s Robert Martin as “a totally plastic band”) at Massey Hall. With no promotion, all 6,400 tickets to Bowie’s shows sold out a month in advance. The stage was filled with elaborate sets inspired by the artwork of Bowie’s album Diamond Dogs, along with touches like a cantilevered chair which positioned him over the front row while singing into a telephone during “Space Oddity.” During “Big Brother,” Bowie sang “from the top of what looked like a space capsule,” Martin observed. “It then opened up into a mirrored room with floor-to-ceiling black lights and a huge hand that folded out into a staircase.”

The audience was decked out for the occasion. “A couple of confusing gender strolled through the crowd, one dressed in a short, frilly pink slip, the other’s mouth smeared with frosted lip gloss.” Goddard noted in the Star. “One girl, otherwise normally dressed, was wearing an enormous pair of bat’s wings. And elsewhere among the jeans and T-shirts you could see lilac lipstick, tangerine eyes, hair dyed Bowie’s rusty-red colour, and the familiar Bowie lightning bolt zigzag painted on people’s faces.”

Some fans probably sensed Bowie’s persona was shifting. Having retired Ziggy Stardust in late 1973, the show’s theme was Orwellian. Bowie’s costume, described as “a powder-blue modified zoot suit,” foreshadowed the scaled-down nature of the latter half of the tour, when he adopted a more soulful presence.

When Bowie next appeared in Toronto, he’d changed personas again. Around 19,000 filled Maple Leaf Gardens on February 26, 1976 to see Bowie in “Thin White Duke” mode. The show began with the presentation of Luis Bunuel and Salvador Dali’s 1929 surrealist film Un Chien Andalou, then continued with a bare stage lit with amber and white lights. Critics felt the spare setting made Bowie look vulnerable, yet separated from the audience by an invisible barrier. “The music was the most sensual part of the night,” Goddard noted. “And it seemed to be the part that made the most direct connection with the audience…Bowie, somehow, seemed removed, as if he was watching it all from a self-imposed distance.” Martin felt the minimal setting was a letdown compared to the inventive theatricality displayed two years earlier: “The king of glitter rock appeared without his makeup and showed that there is precious little behind it.” Bowie may have started to feel removed from himself; by year’s end, he moved to Berlin to restore his health after a period of heavy cocaine use. 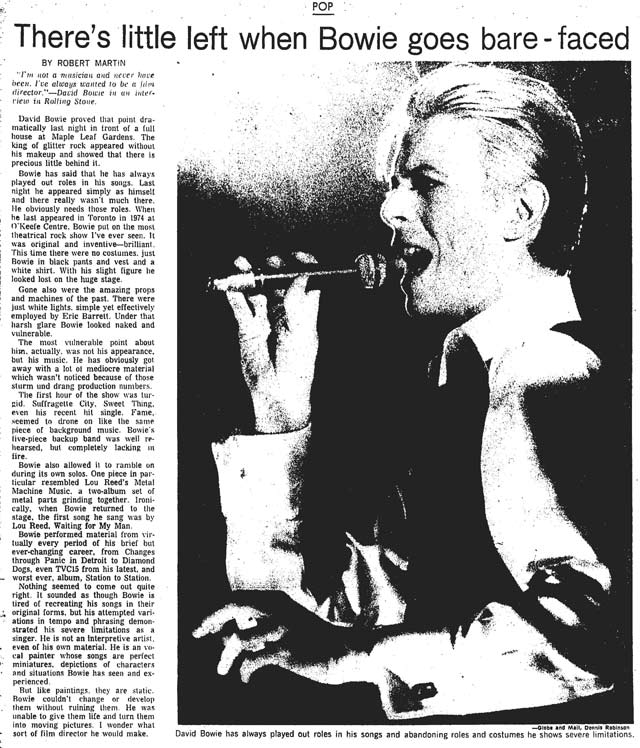 Bowie’s last Toronto show of the 1970s saw a crush of fans eager to enter Maple Leaf Gardens nearly push an incognito Lindsay Kemp (Bowie’s mime teacher, who was in town performing Salome at Toronto Workshop Productions) into a popcorn cart. Once inside, those attending the May 1, 1978 show saw a solid two hour performance. Showing a warmer side to the audience than in previous appearances, his set was described by the Globe and Mail’s Stephen Godfrey as “good, old, born-in-trunk professionalism.” Wearing a long green windbreaker and baggy pants, Bowie “looked like a fragile fisherman,” Godfrey noted. “But the looks are part of the one character that Bowie cannot abandon—that of a vulnerable-looking cadaver—but sings and acts with a confidence and bite that make the looks a mystery. As a culmination of his characters over the years, it couldn’t be bettered.”

Bowie returned to Toronto over the years, opening his infamous Glass Spider Tour here in March 1987. The multimedia David Bowie is exhibition made its North American debut at the Art Gallery of Ontario in fall 2013, showcasing the artist’s archive. One thing he refused to do for the exhibition was discuss his legacy, a matter now left to cultural observers and fans inspired by his music.