Besides reading this piece, check out my article for Canadaland on some of the rougher moments of the Globe and Mail’s history, and the related podcast.

The Globe and Mail turns 175 today. Like any institution around for that length of time, it has celebrated many milestone anniversaries, in ways that reflect the views of the times those celebrations were written.

The largest ad on the 50th anniversary editorial page. The Globe, March 5, 1894.

For the Globe’s 50th anniversary in 1894, a lengthy retrospective editorial was published. It began by celebrating George Brown’s role in Confederation and the development of Canada, then discussed the political evolution of Great Britain over the previous half-century. Those hoping for any insight into the development paper itself will be disappointed—instead, there’s a whole paragraph devoted to how British colonization spread civilization around the world:

Though in the extension of her colonial empire grave faults can be ascribed to Britain, it must be conceded that her aim has been higher than conquest and plunder. The aim of her statesmen has been to plant colonies, to extend civilization and to establish free institutions. Under this policy Canada has grown into complete self-government, and so have the Australian colonies, whose growth since the discovery of gold has been phenomenal. A far more difficult problem for statesmanship is India, with its teeming population diverse as to race, religion, caste, education and intellectual power, jealous of each other and of the dominant race, and as yet far from being prepared for self-government. The progress of exploration and discovery in Africa has been marvelous and has involved Great Britain in new and weighty responsibilities.

After discussing European history, the editorial ends with scientific and social changes. This section has a distinctive whiff of “Toronto the Good” about it, such as the observation that “the temperance movement has brought about an immense improvement in the drinking habits of the people.” It concluded by noted that “scientific theory and theological dogma have sometimes clashed; but the mightiest achievements of the age are due to the happy union of practical science with practical Christianity, and what has been done is only an earnest of what may yet be done by the combination of these forces.”

The paper was in a far more celebratory mood when it marked its 75th anniversary in 1919. A special section kicked off with a series of C.W. Jefferys illustrations marking changes in agriculture, commerce, industry, and transportation. Globe president William Gladstone Jaffray wrote a statement. A pair of excerpts:

It costs over $2,400 per day to produce The Globe. This amount has to be found, and something more for interest on capital. It is obvious, therefore, that a paper must earn money, and a goodly amount thereof, to meet its daily expenses. If to make ends meet, and something more, is necessary to every successful enterprise, it is particularly necessary in the newspaper business, because the daily paper is entrusted with the guarding of public interest as well as the influencing of public opinion. Such great responsibility can be successfully undertaken only by that newspaper which rests upon a firm foundation. If handicapped by deficits and debts, sooner or later it is in danger of falling into the hands of or becoming the prey of those who will use it more or less against the public welfare.

We have seen many times over the ensuing decades the mischief resulting from media which fell into those who use their publications to harm public welfare.

In this second excerpt, Jaffray describes how he tried to keep the Globe financially independent and less susceptible to outside influence:

It is my conviction as publisher of The Globe that I should hold aloof from any financial investments, the advancement of which possibly might conflict with the public interest. As chief owner of The Globe, it has been urged upon me to state, in the first place, that the control of the capital stock of The Globe is in the hands of myself as the largest shareholder, and that the remaining shares necessary to constitute the majority holding are held by other members of the family of the late Senator Robert Jaffray; in the second place, that my holding of stocks other than Globe stock is limited to a very few shares of small value in two or three privately owned companies, which shares have been and still are for sale at the first reasonable market. This statement should convince readers of The Globe that there are no financial relationships to influence its direction and its policies.

Next, editor Stewart Lyon provided a retrospective, reflecting on the Brown era, followed by a vow that the paper, even though it supported the Union government during the 1917 federal election, “has not gone over to Toryism.” As Lyon put it:

That would be a betrayal of all for which this paper has stood during seventy-five years. Its association with Liberalism is not that of a mouthpiece, but of an ally in the promotion of all good causes, and of an honest critic when the leaders of Liberalism lag in the advance, or turn aside into what seem to be unprofitable by-paths.

Lyon also notes the social ills the paper would like to vanquish:

The Globe most sincerely believes that in this land of opportunity the door of hope should be flung wide open. No child should be permitted to go hungry or unlettered. No one in the vigor of life should be without useful occupation. No aged person having faithfully performed the duties of a good citizen should be neglected and forgotten when the shadows begin to fall. To the furtherance of these and all other good causes the Editor pledges his best endeavors.

There was a greeting from Brown’s son. Biographies of the paper’s directors. A tiny reprint of the first front page. More greetings from Canada’s three oldest newspapers (Quebec Chronicle, Montreal Gazette, and Halifax Recorder). Accounts of the life of farmers in Canada West in 1844.

Excerpt of Mackenzie King’s contribution to the March 5, 1919 Globe.

Among the dignitaries asked to provide their memories of working for the Globe was William Lyon Mackenzie King, who was just months away from becoming federal Liberal leader. King joined the paper in fall 1895 as one of several reporters hired in preparation for the upcoming federal election. By the mid-1920s, King’s relationship with the paper was strained.

Music and drama editor E.R. Parkhurst recalled an incident early in his career which happened at a rival paper (which later merged into the Globe) when a prank went horribly for the local food industry. Cat lovers may want to skip this one.

One of several articles about families who had read the Globe since the paper began. The section also included a long list of “charter subscribers whose descendants are on the Globe’s lists to-day” or whose patronage of the paper stretched back at least 50 years.

The paper’s 100th anniversary celebration in 1944 began with a front page salute from publisher George McCullagh.

There was an editorial cartoon…

…and a history of the paper’s physical locations. It would subsequently move to the Telegram’s former offices on Front Street west in 1974, and its current location on King Street East in 2016. 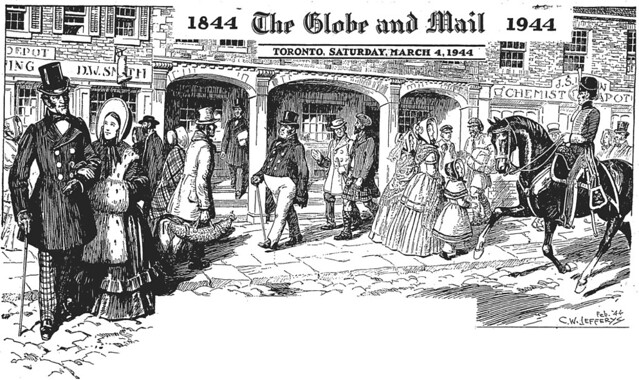 C.W. Jefferys returned for an anniversary illustration, depicting the paper’s original home on King West. If you look carefully, you may notice a top-hatted George Brown emerging from the office with a paper under his arm. Below the drawing, veteran journalist Hector Charlesworth outlined the paper’s history. In the sports section, columnist Jim Coleman noted that the paper ignored sports during its first quarter-century, as “the only game in which George Brown…was interested was politics, and he confined his athletic activities to throwing curves at his political opponents.”

A few words from the “oldest Globe reader” Sir William Mulock, who passed away a few months later. At the time, the Mulock (who, depending on the source, was either 100 or 101) was still serving as chancellor of the University of Toronto.

I’d share material related to the paper’s 125th anniversary in 1969, except that there isn’t any. A search for “George Brown” during the anniversary week that March only finds articles related to the college bearing his name. There was a lone article in November 1986 marking the 50th anniversary of the merger of the Globe and the Mail and Empire.

For the 150th anniversary in 1994, Cameron Smith wrote a three-page story outlining the paper’s biggest stories, followed by a masthead listing 800 employees.

Unfortunately, an anniversary magazine celebrating the occasion does not appear to have been preserved on ProQuest, leaving us with the editorial above, and a Margaret Wente column on women and the G&M. “The world can change fast,” she concluded. “Back when we were 16 years old, none of the women who write and edit the ROB ever dared imagine we would be here, doing this. I hope I’m still around 20 or 30 years from now when today’s 16-year-olds are running the paper, to see whose stories they’ll be telling then.”