For several years, local lovers of Target (or, as some preferred, Tar-zhay) drooled at periodic rumours that the American discount retailer would set up shop north of the border. Time and time again they were let down by failed courtship attempts between Target and Zellers — until today’s revelation that Target has agreed to take over the leases of most Zellers locations. To those infatuated with the new arrival’s offerings, this may be equivalent to an early Valentine’s Day gift. While it might not be heartbreaking to some when the eighty-year-old Canadian discounter disappears from the local landscape in 2013, we’ll take a moment to look at its hopeful beginnings.

Walter Zeller entered the retail business through the stock room of a Woolworth’s in his native Kitchener in 1912. Over the next two decades he rose steadily in the five-and-dime field on both sides of the border, working at store and corporate management levels for the likes of S.S. Kresge and Metropolitan Stores. In 1928 he launched his own small chain with locations in Fort William, London, and St. Catharines. By the end of that year, the original incarnation of Zellers was purchased by American retailer Schulte-United, who rebranded the stores under their banner. Dreams of opening two hundred stores were quashed by the economic crash, which resulted in Schulte-United’s bankruptcy in January 1931. The bankruptcy trustees called in Zeller, who decided after several months of examination to buy the dozen or so stores left in Canada.

Zeller sounded optimistic about the chances for the new Zellers Ltd. when he announced its formation in November 1931. “In building our new company,” he told the press, “one important thought has been borne in mind—that the buying public to-day is more discriminating and thrifty than ever before. It knows and demands style merchandise of good quality. It insists on popular prices.” Among the first stores to carry the new banner was the chain’s sole Toronto location at Yonge and Albert streets (now occupied by the Eaton Centre). Prior to its grand opening on November 11, store manager F.C. Lee told the Star both he and the employees that had been retained were confident about the prospects for Zellers, due to the retail experience, managerial skills, and financial backing of the new corporate overlords. “While Zellers is extending a chain of stores throughout Canada,” Lee noted, “nevertheless the business is founded on the principle that the local success depends on catering to local conditions and preferences—and local managers are empowered to operate on this basis.”

Torontonians didn’t bite, as its first location closed within months. That first store was ignored in the PR for Zellers’ return to the city in March 1950. “Even if many Torontonians hear the news at first with indifference,” Globe and Mailbusiness columnist Wellington Jeffers wrote, “I am convinced that later on they will know it is something of an event that Zeller’s Ltd will this year open a Zeller store on Bloor Street.”

The branch at 24 Bloor Street West (now the site of the Holt Renfrew Centre) was hailed by City officials as the beachhead for larger stores moving onto Bloor between Yonge and Bay.

Within two years of Walter Zeller’s death in 1957, a majority interest in the company was held by American discounter W.T. Grant. The Hudson’s Bay Company became sole owner in 1978. Later acquisitions included many Toronto locations of K-Mart and Towers.

In August 1986 Zellers launched its Club Z customer loyalty program. Initial press reports depicted it as a computerized version of old “green stamp” schemes, complete with gift catalogue promising decent merchandise for a large number of points—a 28-inch colour TV could be yours for only 1.5 million Club Z points. Targeted consumers were women aged 25 to 55 who frequently shopped at Zellers for basic clothing and other staples for their families.

The following year, Zeddy debuted. In his early days, Zeddy taught kids to be safe via colouring books, and lent his assistance in finding missing children. Zeddy later upheld the “law of Toyland,” joining the likes of Batman and Robin in crusading for lower prices on kids’ goods. After being dumped in the woods in a humorous ad campaign in 2012, Zeddy became a mascot for Camp Trillium.

The influence of Target hovered over the chain from the 1990s onward, via revamped presentation in some stores, stocking common brands like Cherokee and Massimo, and periodic rumours the American discounter was about to take over. Yet model stores, as Canadian Business discovered at an Ajax location in 1996, could not escape complaints about messiness customers grumbled about for years:

Pieces of children’s clothing are strewn about the floor. The cosmetics counter is in hopeless disarray. A snorkel and mask are lying in the stationery section. A bucket of dirty water sits next to a mountain of tinned ham. Empty cardboard boxes and abandoned shopping carts block the aisles.There are rows of empty shelves in almost every department of the store. Some of the goodies bins around the checkout area sit empty—a cardinal sin in the retailing world, where impulse buying accounts for a significant percentage of sales. A female clerk swears loudly as she sets up a display. Another gives a visitor a sour look when he asks for directions to the washroom. Needless to say, this is not the ultimate shopping environment. And yet Zellers is counting on “model” outlets such as this to save it from oblivion. 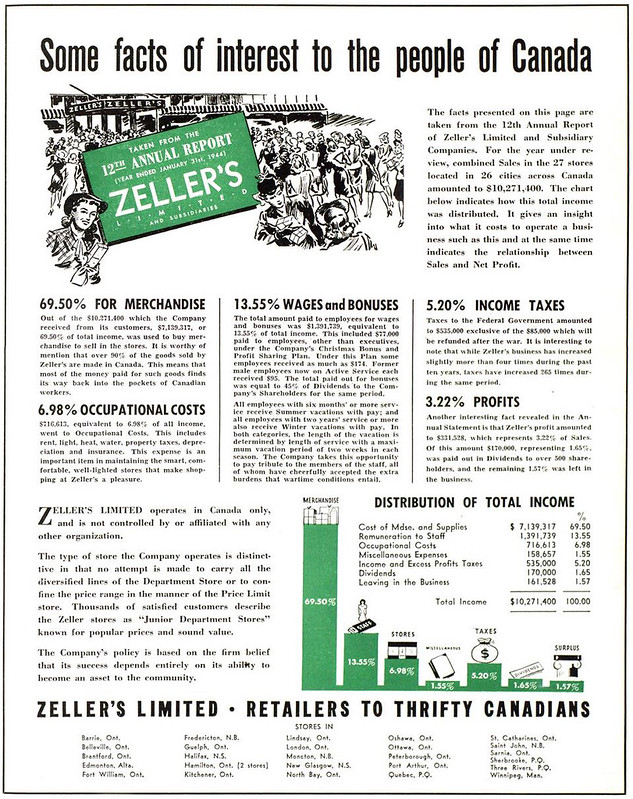 To put it mildly, Target Canada didn’t live up to expectations. Its failure will probably be a case study in business textbooks for years to come. One side effect was a wave of nostalgia for Zellers, which left a void in the marketplace that is still being filled.

When Target announced its decision to pull the plug on its Canadian misadventure, it provoked a wave of nostalgia for the discount chain it supplanted. Memories and laments for Zellers made it a trending topic on social media, and the textbook case study of Target’s mistakes led people to forgive past complaints about the home of Club Z and Zeddy.

“Zellers, for most of its history, was quite simply the major discount store in the country,” retail expert Ed Strapagiel noted when Target purchased Zellers’ leases in Janaury 2011. ”It really was quite phenomenal—it didn’t necessarily offer the most fashionable items, but it had a reputation for good and sturdy clothes.”

Anyone with pangs of nostalgia, or wishing to have a last laugh on Target, can still shop at Zellers in Toronto, though the lone remaining store in the city at Kipling and Queensway is effectively a Hudson’s Bay outlet.

It appears that Zellers will disappear (again) by the beginning of 2020, as its last two locations will be closing.

On the business side of the balance sheet, Mr. Zeller knows as much about the variety store business as any man in the business. On the personal side, he is forthright, hard-hitting and, when asked his opinion, gives it without reserve. What he has accomplished in a relatively short space of time implies a businessman of the “dynamo” type. He is all of that. And to back up his boundless supply of energy, is a knowledge of his own business and capabilities that commands respect.

The profile ended with this odd tidbit: “He has only two hobbies: business and Kiwanis.”

“County Fair” malls and plazas anchored by Zellers dotted the Canadian landscape during the 1970s. I wonder if the one closest to where I grew up (Leamington, now anchored by FreshCo) ever held a “stagnite” like the Georgetown location.

Minneapolis Journal, May 22, 1903. Click on image for larger version.

I considered including a brief history of Target in one of the original articles. These two ads show the birth of Minneapolis-based Dayton’s, out of which Target emerged as its discount division in 1962.