Originally published on Torontoist on April 29, 2011. 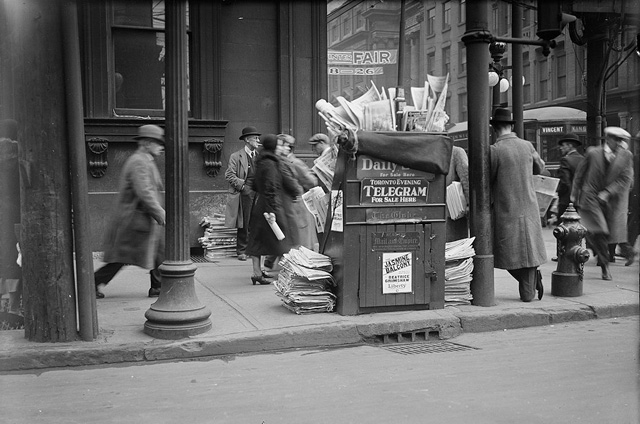 How will you discover the latest election results? Watch them on television? Head to the neighbourhood bar? Follow your favourite website’s coverage? Take the matter into your own hands and tweet the early returns to the entire world? OK, maybe you should be careful with that last option—if a tattletale rats you out, an Elections Canada official may reward you with a hefty fine, since social media is off-limits while the west coast is still voting.

Back in 1930, early reporting wasn’t a problem. The internet hadn’t been invented yet, Canada didn’t have a national broadcasting network, any telegraph and telephone operators who sent early results to the west wouldn’t have faced any harsh legal penalties, as section 329 of the Canada Elections Act wasn’t enacted for another eight years.

How did Torontonians satisfy their election night curiosity at the dawn of the Great Depression? Thanks to the city’s four daily newspapers, voters who cast their ballots on July 28, 1930, had two options: listen to special radio broadcasts in the comfort of their homes, or join the crowds gathered outside the cluster of press buildings around King and Bay to find out if Conservative leader R.B. Bennett would topple the Liberal government of William Lyon Mackenzie King.

For those in a partying mood, the liveliest festivities were found at the Star’s new headquarters at 80 King Street West (now the site of First Canadian Place). Four screens were set up: one for typed bulletins with the latest results, one utilizing a telautograph (an ancestor of the fax machine) “by which the actual writing of the operator at the telegraph wire is made visible to the crowd,” and two movie screens. To soothe those who were anxious and to entertain those who were bored waiting for the results, a 22-piece orchestra was on hand. For readers who couldn’t make it downtown, the Star set up two screens at Fairmount Park at Bowmore Road and Gerrard Street East (one featuring the latest bulletins, the other comedies), which were accompanied by diversions ranging from a military band to a ladies’ softball game. Coverage on the Star’s radio station, CFCA, was anchored by hockey broadcasting pioneer Foster Hewitt. 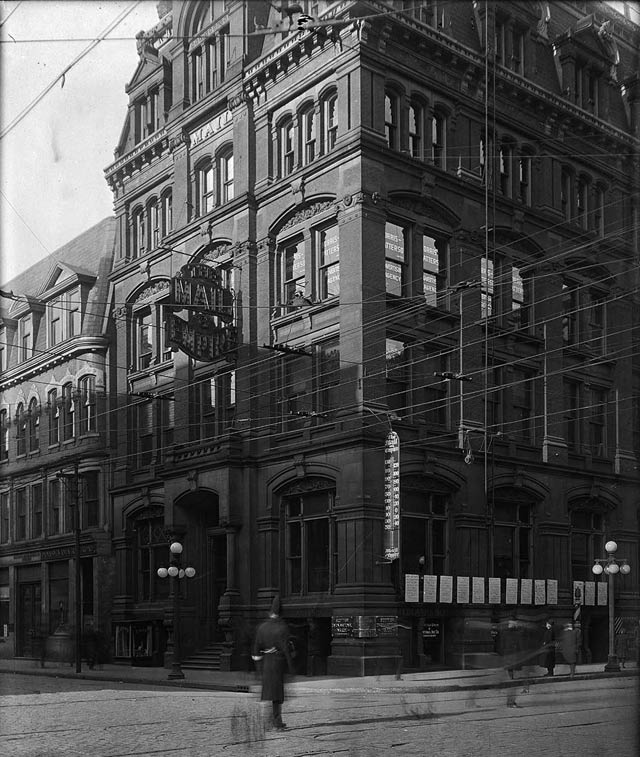 A few doors east of the Star at the northwest corner of King and Bay, the Mail and Empire didn’t add any frilly touches to its offerings, apart from a loudspeaker that played music and a platform for candidates to address the crowd. Results were screened across the street on the side of Cawthra House. The paper promised that during its four hours on air over radio station CKNC, there wouldn’t be any breaks from its election coverage for regular programming—“lulls, if any, between results will be filled in with music.”

The opposite was true of the Telegram’s radio plan. Listeners of CKGW were promised that there would be little disruption to the programs they normally enjoyed on a Monday night, as updates from the Tely intruded for three brief election bulletins. Meanwhile, down at the Tely’s office at Bay and Melinda (now occupied by Commerce Court), results were flashed on the side of the building. Breaks were filled by movies, projected drawings sketched on the spot by the paper’s cartoonists, and live music courtesy of the 48th Highlanders. (We wonder if any of the pro-Bennett blurbs the paper used as space fillers during the campaign—such as “British Bankers Back Bennett…So Should You” and “Vote Bennett and a Boom/Oust W.L.M. King and Gloom”—were projected on “the old lady of Melinda Street.”) 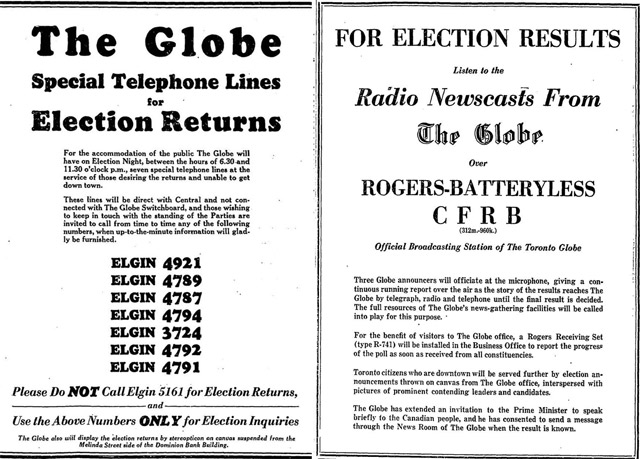 The Globe, then located at 64 Yonge Street, projected returns for the public via a stereopticon (or magic lantern) onto a canvas hanging on the Melinda Street side of the Dominion Bank Building (now One King West). Seven phone lines were set up to provide returns for eager callers. The paper promised that for its radio coverage on CFRB, “Special preparations have been made to make the radio newscast as rapid and accurate as human ingenuity and the super-powered equipment of CFRB will permit.” Regardless of which way the vote went, readers were promised that Prime Minister King would provide a short radio message once the results were in.

That speech turned out to be a concession address, as Bennett emerged the victor. While the result may have disappointed ardent followers mulling outside the Liberal-leaning Globe, we suspect the crowd was jubilant outside the staunchly Tory Telegram. Despite each paper’s fierce partisanship, no fights between neighbouring left-leaning Star readers and right-leaning Mail and Empire fans were reported. If there were any bitter feelings, voters bottled them up until the internet comments section was invented. 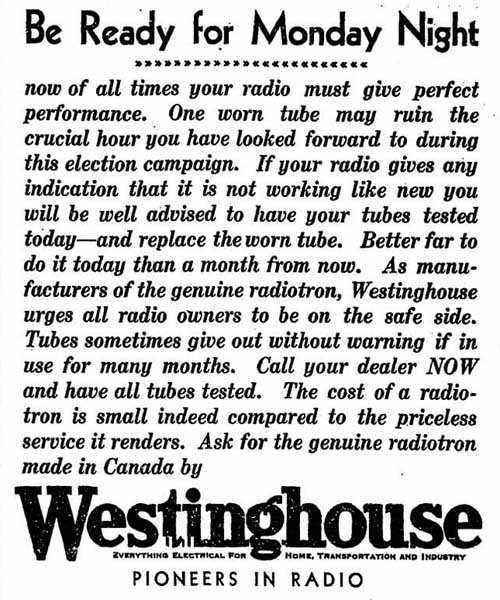 If you’re going to listen to the election results via radio, you want to make sure your set is working. There were no reports as to whether this ad prompted a run on tubes throughout Toronto. 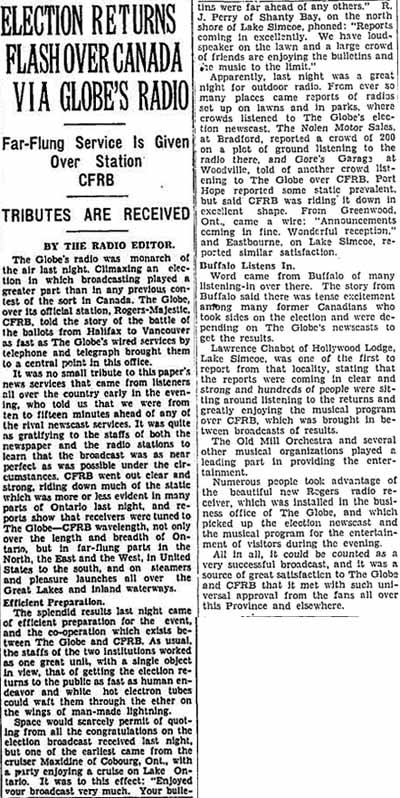 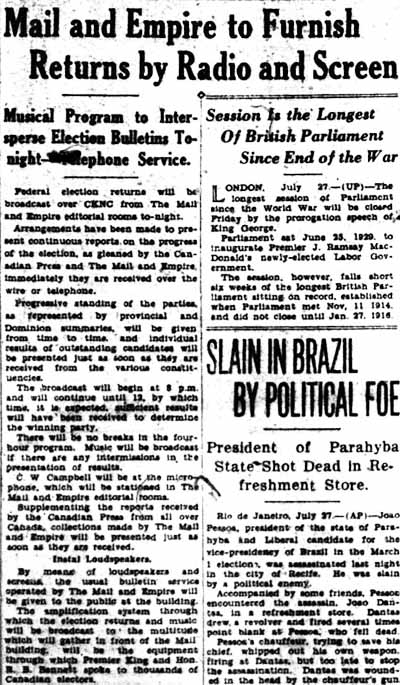 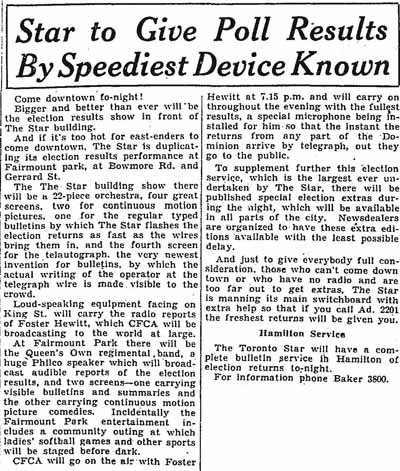 I love how the spotlights emanating from the Star‘s building have been drawn in for dramatic effect. There also appear to have been plenty of disembodied limbs in the crowd. 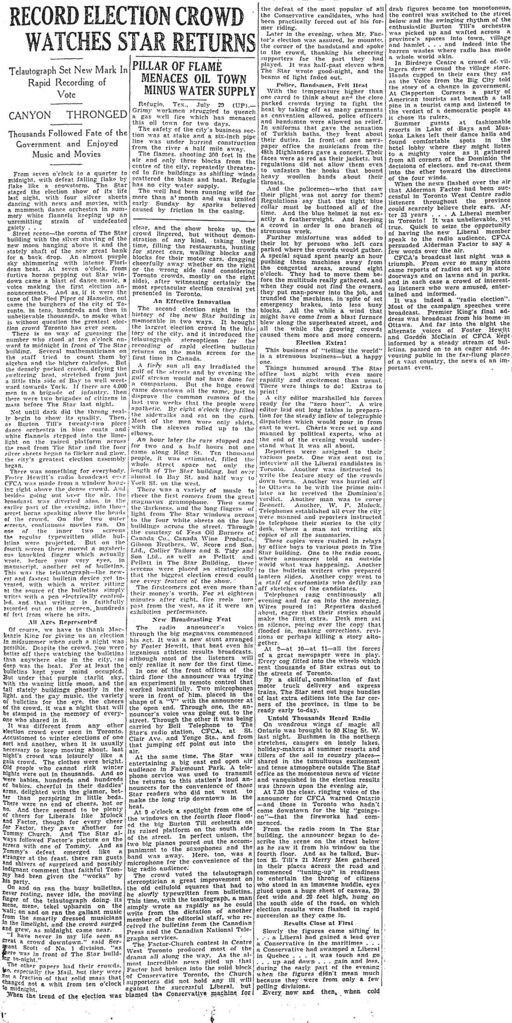 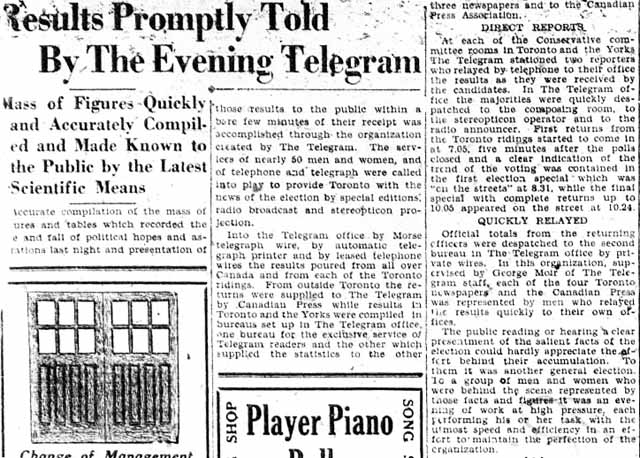 While the Tely had reporters stationed in Conservative campaign offices around the city, it is not mentioned if they sent anyone to hang out with the Liberals. One Grit candidate they might have spent the evening with was Samuel Factor in the short-lived riding of Toronto West Centre, who knocked off former Toronto mayor and veteran Conservative MP Tommy Church (a politician the Tely treated with the reverance usually reserved for religious deities). 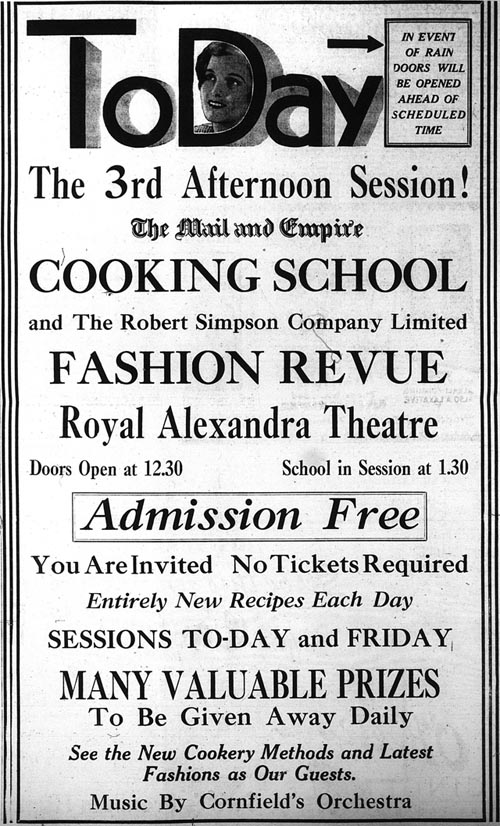 And so (after a long hiatus for this series), we roll into day 3 of the Mail and Empire‘s cooking school and fashion revue. 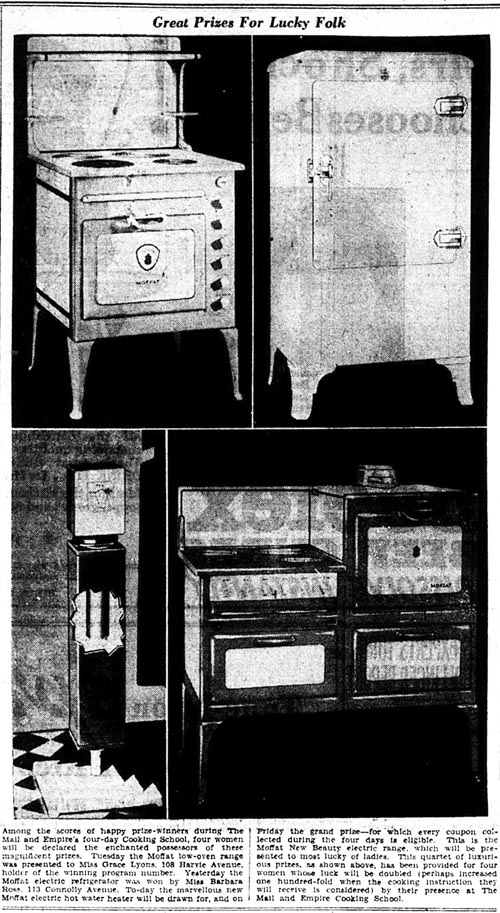 A sampling of the prizes used to entice readers to attend the cooking demonstrations. 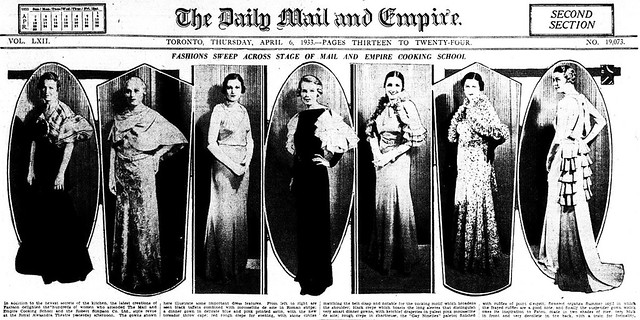 A sampling of the styles displayed during the fashion revue.

Beyond the reminders to attend the cooking school, regular content carried on. In this case, recipes for crepes suzettes and mayo. 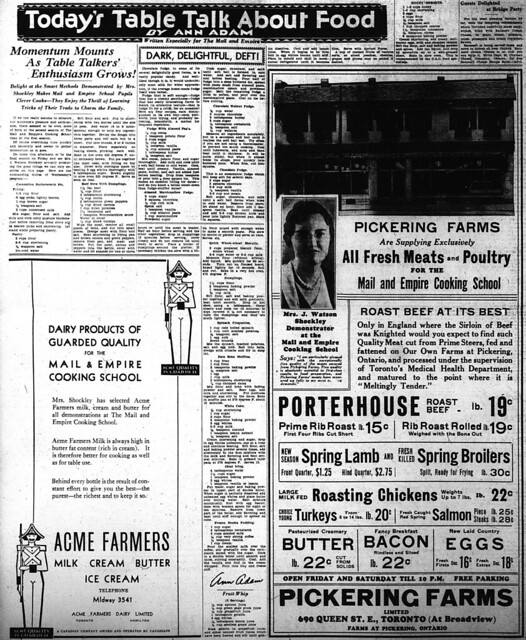 A full page of recipes, alongside ads for the cooking school’s suppliers. The Acme Farmers Dairy plant was located on Walmer Road south of Casa Loma. After a succession of ownership changes, the plant closed in 1986 and was replaced with housing. Pickering Farms was acquired by Loblaws in 1954.

Mrs. Shockley was rolling in endorsements during her stay in Toronto. On April 6 alone, besides these two ads, she also pitched Mazola Corn Oil and Parker’s Cleaners. 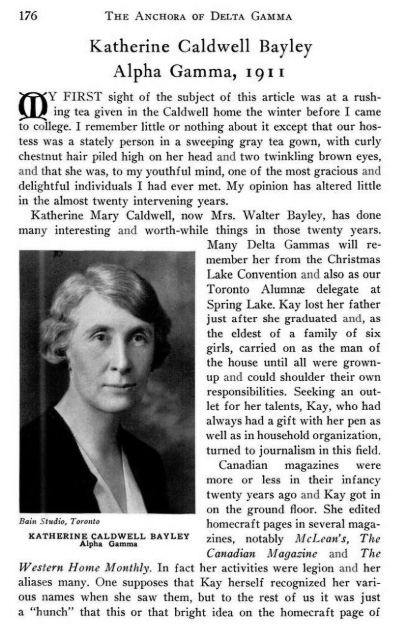 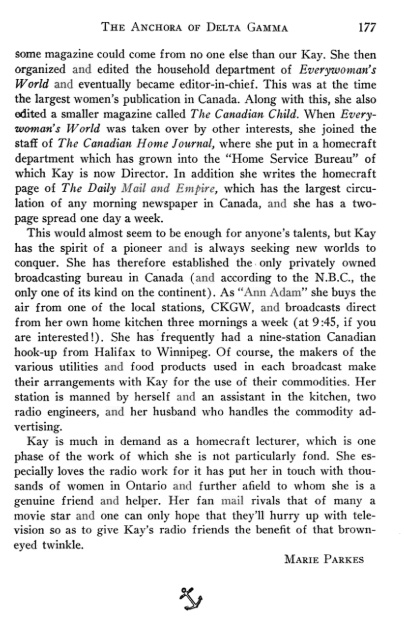 Sidebar: a contemporary biography of Katherine Caldwell Bayley (1889-1976), aka Ann Adam. Beyond what’s mentioned here, she also wrote several cookbooks as Ann Adam or whatever house names her clients used. Based in Toronto, she ran Ann Adam Homecrafters, a consulting agency which operated through the 1960s. Among her assistants was Helen Gagen, who later became food editor of the Telegram. 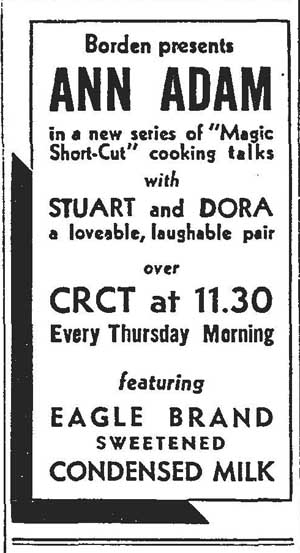 An ad for one of Bayley’s regular radio gigs. CKGW, which was owned by Gooderham and Worts distillery, was leased by the forerunner of the CBC around 1933 and changed its call letters to CRCT. On Christmas Eve 1937 it became CBL.

When the Mail and Empire merged with the Globe in November 1936, Bayley’s columns were not carried over. Six years passed before she joined the Globe and Mail as a daily food columnist on “The Homemaker Page.”

Her reintroduction stressed the realities of wartime home economics. “This daily column is designed to help you with the sometimes rather complicated problem of adjusting your cooking and meal-planning to the regulations necessary in a country at war,” the page editor wrote in the September 25, 1942 edition. “Some foods are rationed; some are no longer obtainable, and of others we are asked voluntarily to reduce our consumption. All this, and the effort, in spite of it, to increase, rather than decrease our physical efficiency to enable us to fill wartime jobs, involves more careful catering for our families and a skillful use of substitutes.” 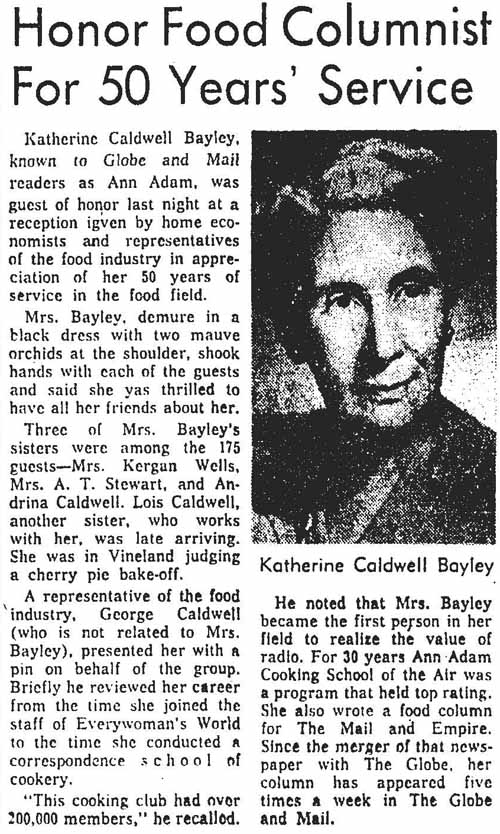 Bayley’s final G&M column received no fanfare elsewhere in the paper, but went out in a partying mood.

Back to the cooking school…

By April 7, the cooking school was front page advertorial copy…um…news.

Next: the cooking school wrap-up.

While March 3 did not catch on as a national observance celebrating the wonders of marshmallows in Canada, you can celebrate the toasted version of this sugary treat every August 30!

Also, hands up whoever has seen “mm” as shorthand for marshmallow in a recipe. 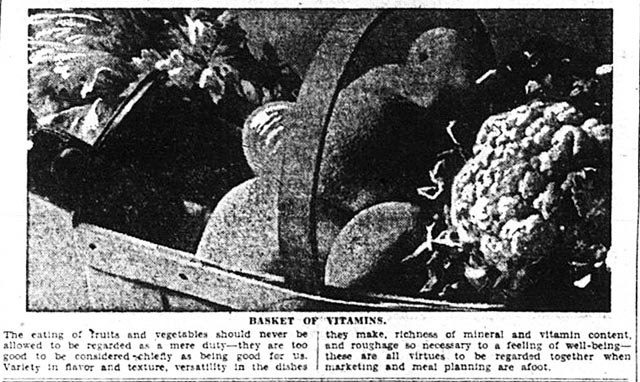 After indulging in all those marshmallow recipes, a basket of vitamin-rich food may be required. It may also be a quiet reminder that winter was nearing its end, and fresher vegetables were not far away. 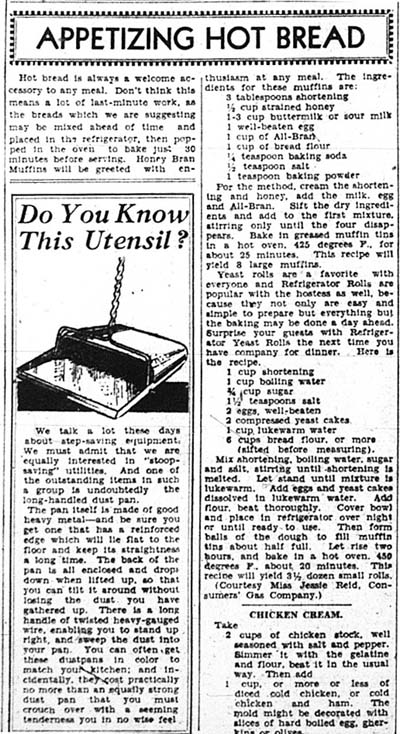 “Do You Know This Utensil” was a weekly feature which introduced handy products for any 1930s kitchen, such as this dust pan which saved the day for any klutzes who dropped ingredients for their appetizing hot bread on the floor. 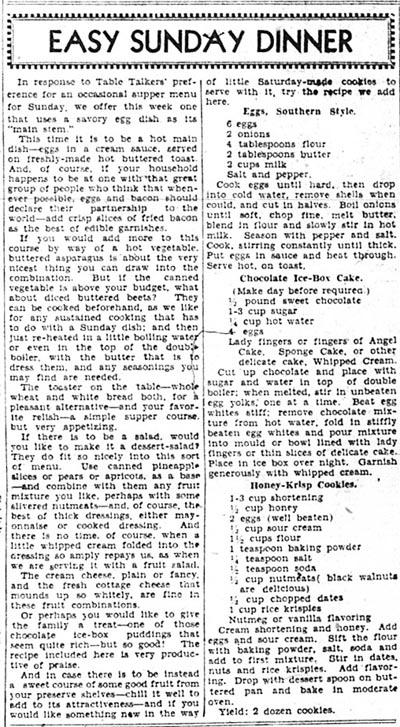 Note the presence of Rice Krispies in the last recipe, which were still a relatively new product when this paper was published. Introduced to store shelves in 1928, their mascots Snap, Crackle and Pop made their advertising debut in 1933. It was several more years before the recipe for Rice Krispie Squares/Treats was unleashed on the public.

And now, a few words from our sponsors. 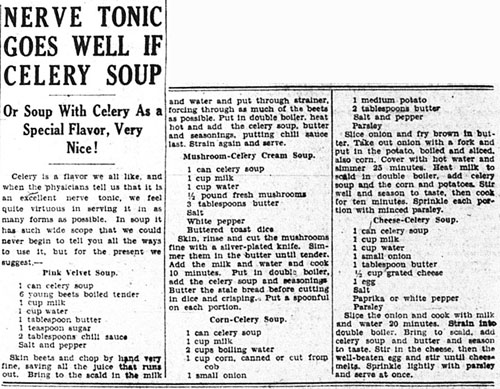 Four suggestions for celery-based soups. The title plays upon the notion of celery as a nerve-calmer, which had resulted in numerous celery-based drinks marketed around the turn of the 20th century. One of the few modern survivors is New York deli staple Dr. Brown’s Cel-Ray. I’ve tried it several times and haven’t enjoyed it (this from somebody who loves old school sodas like spruce beer). I understand the concept and how Cel-Ray could pair nicely with some form of cured meat, but I suspect I’d be happier if there was a salty, pickle-based drink. 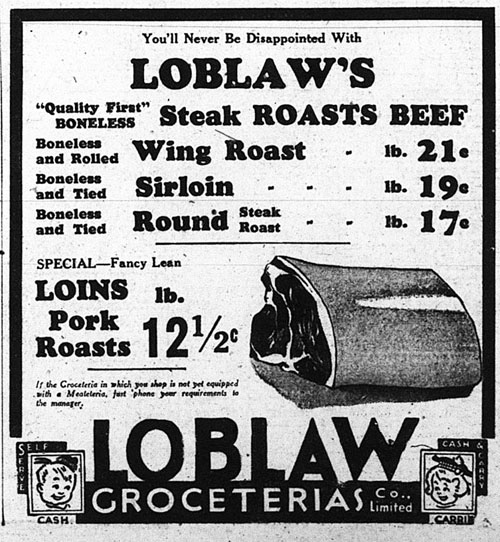 It’s doubtful that Loblaws will revive its short lived mascots Cash and Carrie for the chain’s 100th anniversary this year.

Onto the second page…

As gossip is “the child of laziness” that is “adopted by people who don’t think,” what weighty matters of the world shall we discuss while sticking a fork into a piece of tuna and celery souffle?

Aside: if any of you are tempted to try any of the recipes featured in this series, let me know. Send pictures, reviews, etc. 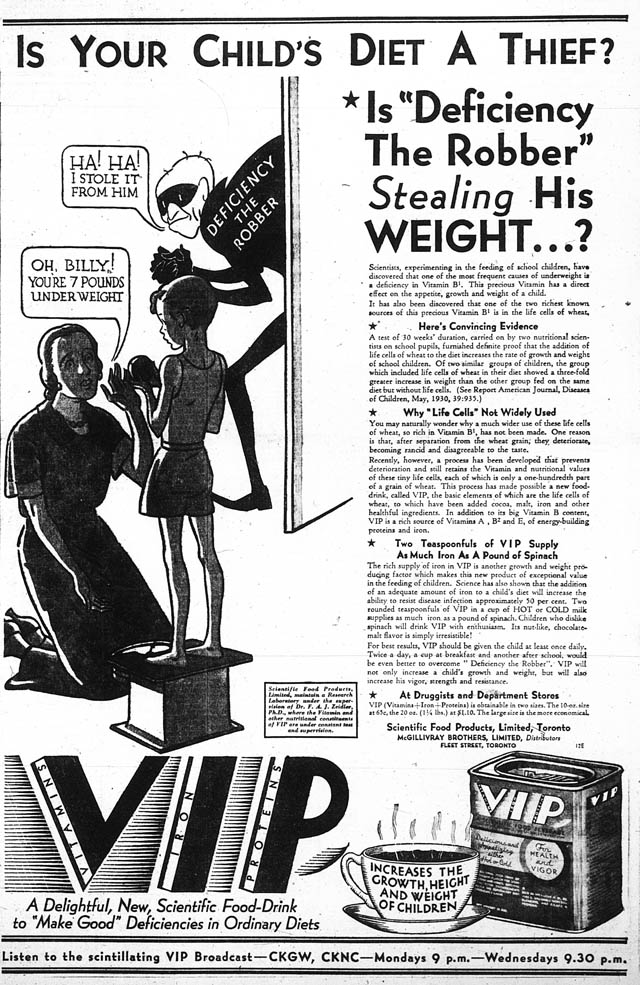 I wasn’t kidding when I said last time that underweight children were going to be a recurring advertising concern. As funny as this ad seems with its bizarre-looking nutrient deficiency crook, child malnutrition was a serious concern during this era.

As for the radio stations which carried the “VIP Broadcast,” both evolved into today’s CBC — CKGW (named after its owner, Gooderham and Worts) is the ancestor of today’s CBLA, while CKNC (run by the Canadian National Carbon Company) would become CJBC.