Originally published (with plenty of photos) on Torontoist on August 20, 2012.

When zombies are around, trouble looms. Whether caused by disease, viral outbreaks, space debris, or science gone bad, a gathering of the undead tends not to turn out well for the living.

And yet even though logic dictates that one should run when faced with a mass of shambling, shuffling creatures, curiosity draws us to them despite the mortal danger. I’m guilty of this. How else can I explain why I ventured into the middle of a gathering of zombies who appeared to be…washing cars?

I had heard rumours that the undead were being used to clean the vehicles of the living. The washes are reputed to serve as a fundraising effort for the annual zombie walk through the streets of Toronto. Further rumours suggested that the Heart and Stroke Foundation is a partner in this year’s walk.

As I pulled into the Classic Coin Car Wash at College Street and Lansdowne Avenue, my heart jumped a little. Was I putting my life on the line to discover if a zombie could wash my vehicle? Perhaps, but I had to find out if the undead could do a better job than some of the mechanized car washes around town, whose programmed cleaning cycles can miss a spot or two.

Judging from her fresh-looking gaping wounds and relatively peachy colour, it appeared the zombie collecting my money had recently joined the undead. Her partner was grey and slower-moving, which made it easy to close the window on him when he attempted to eat my brains. I was motioned to park the car and wait for a bay to open up.

Since the air lacked agonized screaming, I figured the situation was under enough control that it was safe to wander the lot. There was a table where several zombies had been pressed into bake sale/T-shirt-selling duty. Even the undead have embraced the cupcake craze: frosting swirled like a brain was a good match with the chocolate cake, even if I tried not to ponder what (or who) might have gone into the sweet topping.

As I drove my car into an open bay, it was swarmed by a legion of groaning zombies. Their eyes spoke of their inner longing to have me for lunch as they slowly spread blood across my vehicle. Their slow, jerky motions shook the car a bit, which was unnerving until I realized they were spreading their bloody mess onto every spot of dirt. Still, the thought that they might turn on me at any second made me want to flee the car the second the horde shuffled off to work on another car.

Back in the lot, more zombies had ventured to the curb to draw in traffic. Their efforts appeared to be working, as a line snaked westward along College Street. While some undead mumbled about brains, others offered children cotton candy. One brave kid smiled when a zombie grunted that he could leave a bloody print on the child’s t-shirt (with parental approval, of course). Any lingering worries about a sudden attack evaporated.

Soon it was time to drive off. I looked over the car and determined that training the undead to clean vehicles might have been a good idea. The car smelled fresh and soapy. The blood had been washed off. With the zombies’ attentions turned to other drivers who shared my morbid sense of curiosity, I drove out of the lot. Just to be to safe, I checked the trunk a few miles down the road just to make sure nothing had crawled in while I wasn’t looking.

This was a fun story to write — what’s there not to enjoy when scribbling about zombies washing your car? It didn’t hurt the participants totally threw themselves into character while cleaning my vehicle, and left it looking spiffy.

It’s possible I may have taken backup photos, but currently I cannot find most of the images I snapped during 2012. When/if I do, this post will be updated. Otherwise, check the link at the beginning of this piece.

Originally published on Torontoist on April 30, 2007. 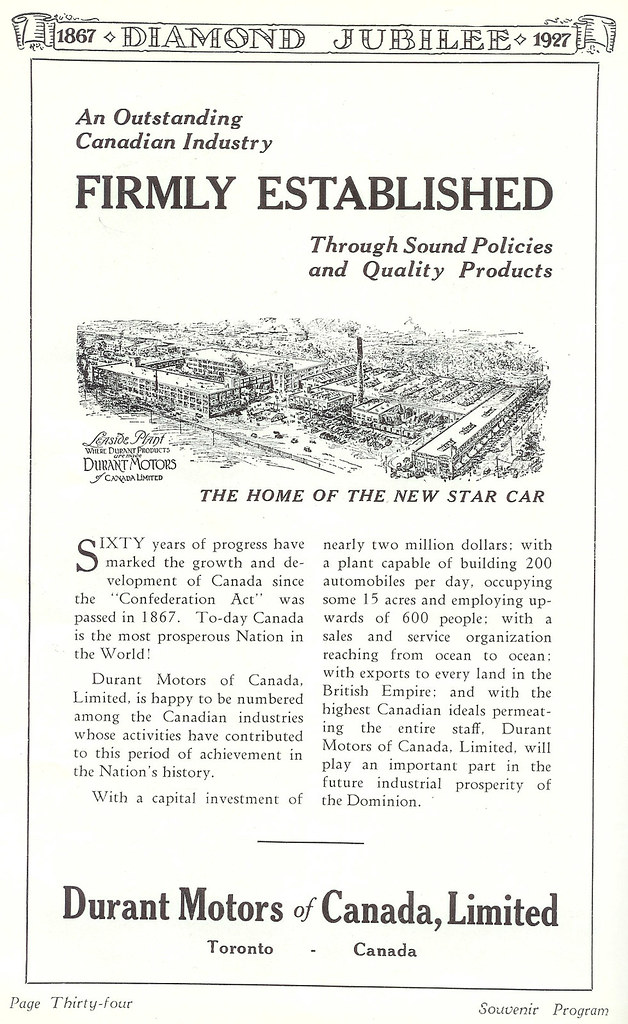 Leaside—car manufacturing mecca? It was during our 60th anniversary as a Dominion, when Durant Motors of Canada called it home.

William Crapo “Billy” Durant was the main force behind the formation of General Motors in 1908, when he brought together manufacturers such as Oldsmobile and Buick. After being forced out of GM twice, he founded Durant Motors in 1921. The company established itself as a full-line automaker, with economy (Star), mid-range (Durant, Flint) and luxury (Princeton, Locomobile) lines.

A Canadian branch was quickly established, using a former munitions factory at Laird Drive and Commercial Road. Operations in Leaside proved to be healthier than the American parent, thanks to the export of its vehicles to Great Britain, touted in this ad.

The Star line was introduced in 1922 to compete with Ford’s venerable Model T. Neither make outlasted this ad very long—Model T production wound down in 1927 after a 20-year run, while the Star was phased out the next year.

After Durant’s American headquarters defaulted on a loan, the Leaside plant reorganized itself as Dominion Motors. The decision to focus on a new luxury line, Frontenac, proved disastrous. With the Great Depression reaching its depths, the company called it a day by the end of 1933. The property was split between its neighbour to the north, Canada Wire and Cable, and Fridgidaire. The latter left in the late 1950s, with Canada Wire and Cable claiming the rest of the site. Operations continued until 1996, with the land cleared away a few years later to make way for the Leaside SmartCentre big box complex.

As for Durant? Wiped out by the Depression, he ran a bowling alley in Flint, Michigan in the early 1940s, with plans for a national chain before suffering a stroke.