Originally published as a “Historicist” column by Torontoist on January 7, 2012. 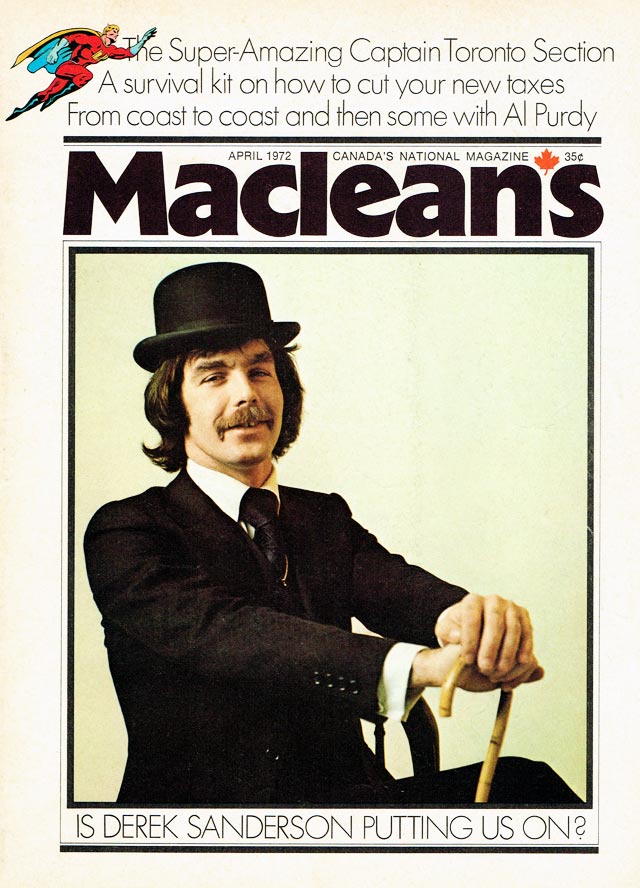 It’s common knowledge that Toronto isn’t the most popular city amongst the rest of the country. Something about a superior attitude or being the centre of the universe. It’s a long-held belief, and one that Maclean’s was willing to exploit when it devoted a section of its April 1972 issue to the city. While the headlines promised pages of full-on hatred for the city to attract readers looking for more reasons to despise Toronto, reading on revealed varying degrees of admiration for Canada’s fastest-growing city.

After reading Peter C. Newman’s editorial, a glowing portrait of Toronto didn’t appear imminent. “In this issue,” Newman wrote, “we devote nine pages to proving that, while it may be a great city to live in, Toronto is a terrible place to contemplate.” Most of Newman’s piece concerned the upcoming federal election, during which he believed that the rest of Canada would “comfort themselves with the realization that general elections can be great equalizers,” as the GTA was only represented by 24 of the 264 seats to be contested.

Under the headline “Keeping Toronto Hateful,” the special section’s introduction listed the city’s contradictions, including some that linger on:

Toronto, the city that Canada despises, spreads its arrogance over 240 square miles. It is the financial, fashion, art, industrial, communications and Muzak capital of the nation; not to mention the fastest-growing city in the world. It dispassionately dispenses pay cheques, trends, culture, praise, punishment, entertainment, success, cynicism, predestiny and other assorted imperishable goods to a nation that has to be grateful whether it likes it or not. More New York Times are sold on Sunday in Toronto than any other city in Canada. Yet the Toronto Telegram, the country’s fourth largest newspaper, was forced to fold. Toronto hates losers. Yet the Leafs and the Argos are classic losers. Toronto contains more Americans within its limits than any other city in the country and is the most American city outside of the United States.

Many of the decisions to sell domestic industry and natural resources to outside interests are made in boardrooms high above Lake Ontario. Yet Toronto is the birthplace of the New Canadian Nationalism. Toronto identified itself with the Big Apple more than any other centre in North America (including Chicago). Yet Toronto is still a bastion of English colonialism. Toronto is the most materialistic city in the country (its per capita Cadillac ownership is among the highest in the world), yet when Henry Moore’s Archer was unveiled 10,000 people turned out to cheer. Toronto is adding the equivalent of 11 football fields in new factory space every year. Yet the city’s welfare department is running out of funds. Torontonians foster the theory that Canadians have an inferiority complex. Yet people in Toronto are constantly terrified about losing their jobs. Toronto elected Mayor William Dennison twice in a row. Yet Toronto loves to say he is an embarrassment.

The question inevitably arises: how and why does any sensitive Canadian continue to live in such a rotten place?

Readers were advised that they would “know thy enemy.”

On the newsstands around the same time as this issue of Maclean’s: Incredible Hulk #152, with a cover pencilled by Captain Toronto artist Herb Trimpe and inked by John Severin.

Along the bottom of the following six pages were the adventures of Captain Toronto, which poked fun at the attitudes of some Torontonians toward the city’s reputation for cleanliness. Though no writer was credited, the strip was drawn by American comic book artist Herb Trimpe, then in the midst of a seven-year run illustrating the adventures of the Incredible Hulk.

The headline for the first article in the section, Bill Howell’s “End of the Road,” declared that Toronto was “the city of highest paid losers in Canada.” The piece failed to live up to that claim, despite noting that it took longer to escape Toronto by car than any other city in the country, and a lengthy description of new apartment towers (likely in St. James Town and the suburbs) evocative of recent fears of the future evolution of CityPlace:

They have tiny balconies, gestures that from a distance look like chest-of-drawer handles. They also have paper-thin walls, waiting rooms no one waits in, broken-down clothes dryers, exorbitant rents, Big Brother intercoms, and they’re built for New Torontonians, careerists who have come to the Big City to confront the Beast in its lair.

Howell admitted that he liked Toronto more every time he returned from an extended break. He appreciated the small pleasures the city offered, from a restaurant on Ossington that showed diners how to cook well to residents signing a petition to preserve trees downtown.

Next up was “The Bush League Complex” by Sun columnist McKenzie Porter. The article outlined Porter’s views on the Toronto high society types he had covered for years in the Telegram and their ability to shock other writers expecting primness by tossing around four-letter words without regret. Porter offered the following tips on climbing Hogtown’s social ladder, many of which are still useful in social situations:

Dress soberly and expensively. Be sexy with subtlety. Speak firmly and clearly. Never mumble. Be lighthearted and quick to laugh. Listen intently to other speakers and butt in only when you have something compelling to say. Flatter other speakers by asking them questions that prolong their own line of talk. Never be pushy for introductions. Intrigue important strangers by catching their eye for a moment and smiling courteously. Do not be afraid to say “I’m sorry I didn’t catch your name.” Never try to assess a person’s status by asking him where he lives. Never talk about yourself until you are invited to do so with questions. Never drop names. Never gossip about anybody who is unknown to one or more persons in your immediate group. Never talk about children, travel, homes, or business unless somebody else opens the topic. Offer to work, if a suitable opening occurs, for cultural or charitable institutions. Buy all the tickets you can afford for the great society gatherings.

Porter’s final words of wisdom? “Do not feel ashamed of social climbing or attempt to conceal such ambitions. You are a primate.”

The final article, Barrie Hale’s “Welcome to the Middle-Class Capital of the World,” focused on Toronto’s attraction to the 10 million tourists who descended upon the city each year, specifically American visitors who loved Toronto for the reasons suburban Detroit resident Mrs. J. Rudniak outlined in a letter to the Star:

My husband and I have just returned from a trip to Toronto and feel we should take the time to write and compliment your Mayor, William Dennison, on his many fine achievements. We were truly impressed by the amount of building construction going on in the downtown area. Moreover, we were delighted to see the use of flowers, trees and water by everyone—whether city buildings, individual homes or businesses; the well-kept older homes and buildings; the cleanliness of all areas, new or old; the beaches along the lakeshore, easily accessible to everyone; and even more importantly, the number of people both young and old, of all ethnic backgrounds, strolling at night in all parts of the city. This is what makes a city live—when its inhabitants are out on a warm night enjoying their city. Keep up the good work; we look forward to our next visit.

To Hale, tourists like Mrs. Rudniak were comfortable in a city where the middle class didn’t feel threatened by the social decay they perceived at home. Toronto’s safety, prosperity, and progressiveness were reassuring—they could admire a Mies van der Rohe–designed building like the Toronto-Dominion Centre without the (justified or not) fear of a mugging while viewing his works in Chicago or New York, or explore an ethnic neighbourhood without worrying if a riot would break out.

As for the future, Hale touched on the fears expressed by urban affairs experts that continued construction of expressways and high-rises would destroy the mosaic of neighbourhoods that visitors enjoyed. The increased power of citizen groups and resident associations was noted, as was the support that still existed among some councillors to revive the Spadina Expressway. These were the concerns that dominated Toronto politics for the rest of the 1970s, especially after a large number of reformers were elected to city council in December 1972.

We’ll leave Captain Toronto at the bar, drowning his sorrows following the tragic combination of stepping in doggie-doo and missing a taping of Elwood Glover’s Luncheon Date. None of his grumbling earned pity from the rest of the country.

Additional information from the August 19, 1971 edition of the Toronto Star.