Part One: Saturday Afternoon with the Tow Truck

Originally published on Torontoist on January 2, 2008. 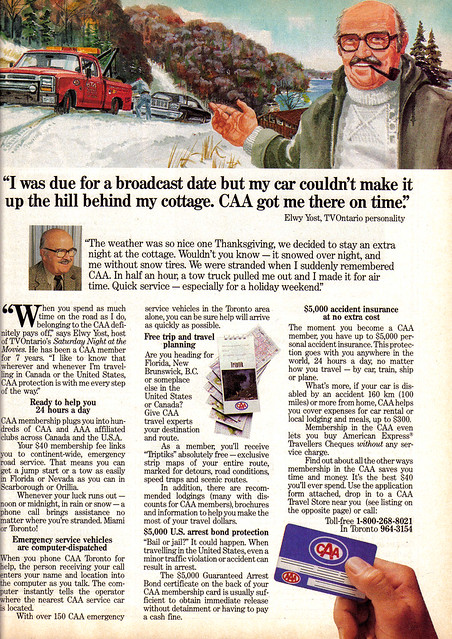 Nobody likes to be stranded during the holiday season due to car trouble. Whether it’s a dead battery, unexpected snowfall, or executing a 180-degree spin into the ditch alongside the 401 on the way back to the city, inclement weather and Murphy’s Law often combine to make this a busy time of the year for auto clubs like CAA. Even beloved weekend movie hosts occasionally require their assistance.

Before gaining fame as a movie host, Weston native Elwy Yost’s occupations included stage actor, high school English teacher, employee in the personnel department of A.V. Roe during the Avro Arrow controversy, and television quiz show panelist. Yost’s first film show was Passport to Adventure, a mid-1960s CBC series in which features were presented in a serialized format alongside interviews with performers. When Yost began his film-hosting duties for TVOntario in the 1970s, he utilized the serial format for Magic Shadows on weeknights, while a rich archive of interviews with filmmakers and critics provided the context for the feature presentations on Saturday Night at the Movies. The bubbling enthusiasm he displayed for films during his 25-year run on TVOntario helped inspire a generation of film geeks. For his final broadcast in 1999, Yost screened Speed, written by one of those he inspired, his son Graham.

While waiting for his vehicle to be pulled out of the snow, one wonders if Elwy and the driver discussed movies with well-framed towing sequences.

Part Two: Curtains Fall on Saturday Night at the Movies

Originally published on Torontoist on November 13, 2012.

When the phrase “plan that looks to future” sits atop a press release, it’s often code for cutbacks or reallocation of resources. So it is with a missive released today by TVO, which buries the axe amid plans to direct reduced provincial funding into digital children’s and current affairs programming. Not until paragraph six does the bombshell hit: Saturday Night at the Movies (SNAM), currently the longest running movie program on television, will soon load its final reel.

According to TVO CEO Lisa de Wilde, “When Saturday Night at the Movies began almost 40 years ago, it broke new ground but now entire TV networks and web services are dedicated to movies.” While this may be true, those other services lack the extensive archive of interviews TVO has built up since SNAM debuted in March 1974. Those other services offer studio-produced puff pieces and PR junket quality featurettes on movies, but they don’t reach into the mechanics of filmmaking as SNAM’s conversations do. Since the late 1990s, the series has been included in York University’s film curriculum.

Beyond fulfilling TVO’s mandate as an educational broadcaster SNAM, especially during Elwy Yost’s quarter-century run as host, turned a generation of viewers into film connoisseurs. As Torontoist’s Christopher Bird noted in his obituary for Yost last year, “He was the friendliest man on television who wasn’t Mister Rogers, because he had the best job ever: he got paid to talk about movies, and movies deserved better than cynicism and snark to someone like Elwy Yost.” His manner and the show’s excellent programming choices helped the series become the network’s highest-rated series.

To a child growing up in a pre-cable household during the 1980s, SNAM was a gateway to classic movies that weren’t regularly shown on television. Under Yost’s warm guidance, it was a place to discover films that they only knew through stills in picture books, to understand who Groucho Marx was beyond the inspiration for gag glasses, spot Alfred Hitchcock’s cameos, and crack the mystery of “Rosebud.”

Besides SNAM, TVO also announced that it is ending Allan Gregg in Conversationafter 18 years. While Big Ideas is being cancelled as an ongoing series, the network indicates the lectures will reappear as an occasional segment of The Agenda with Steve Paikin. The total cuts announced today will save TVO $2 million and axe up to 40 jobs. But amid the carefully vetted talk about fiscal realities and leveraging efficiencies, a little magic has been lost.

Part Three: More Than Turning On a Projector

Originally published on Torontoist on November 20, 2012.

Last week, we reported that TVOntario is cancelling Saturday Night at the Movies after almost 40 years on the air. Today’s ad from the show’s early days sums up the things that made it a hit: an enthusiastic host, smart programming choices, and the use of the medium as “a springboard for discussion, ideas, feelings and—education.”

Saturday Night at the Movies was prominently featured in the network’s “TVOntario opens eyes” print advertising campaign during the mid-1970s. Today’s ad gives a feel for the range of films the series was showing at that time: Hitchcock thrillers, swashbuckling adventures, and Cold War–paranoia sci-fi.

Sharing space in this ad is host Elwy Yost’s weeknight gig, Magic Shadows. To fit the half-hour slot, movies were split up, serial style, and curated by Yost in a less formal manner than the Saturday-night feature bills. The show featured an imaginative—if slightly frightening to children—animated opening sequence.

Here’s a sense of what Magic Shadows was like, via a series of intros from its presentation of The Snows of Kilimanjaro.

TVO’s online archive includes several episodes of Talking Film, which thematically compiled Yost’s interviews (and was another series I ate up as a kid).

Combined, all of Yost’s TVO film shows, combined with the guidance of my father and devouring many library books, helped me develop an appreciation for cinema that remains today. The few times I watched the series after Yost’s retirement, it always felt like something was missing. I think it was his sense of infectious enthusiasm, mixed with a deep appreciation for film history, that made the package work.