This installment of my “Ghost City” column for The Grid was originally published online on September 18, 2012. 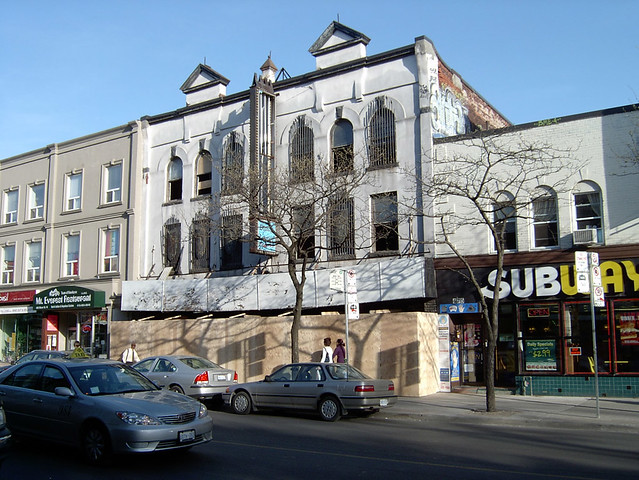 The Hungarian Castle undergoing renovations to transform into BMV, May 4, 2006. Click on image for larger version.

When it opened in 2006, the Bloor Street branch of BMV represented more than just a giant bookstore. Its bright blue exterior and large street-level windows removed an eyesore known to nearby businesses and residents as the “black hole of the Annex.” After nearly two decades of rot, any new owner or tenant occupying the former Hungarian Castle restaurant would have been greeted with open arms.

Why 471 Bloor St. W. appeared abandoned for so long is subject to rumours and urban legends. Elusive landlord Annie Racz didn’t provide answers during her lifetime. When she died in 2004, she left an estate consisting of millions of dollars worth of real estate centered around Bloor Street and Brunswick Avenue, some of which remains empty under the stewardship of her heir. Despite high interest from potential buyers, Racz threw up barriers that months of negotiation couldn’t breach. Theories on why she hung onto these properties without maintaining them included attempts to prevent higher tax assessments, an inability to trust anyone, and sentimental reminders of her late husband.

When Eye Weekly’s Edward Keenan profiled Racz in 2003, he found that, after six weeks of trying to track her down, he didn’t feel any wiser than at the beginning of his investigation. He heard rumours that had her living anywhere from above By the Way Cafe to Richmond Hill, that she resembled a bag lady, and that her legs had been amputated. Annex Residents Association chair Eric Domville was so frustrated by Racz’s refusal to do anything with 471 Bloor that he began to wonder if she was “a figment of somebody’s imagination. Does she live in a cave, or in a secret hideaway like Lex Luthor?”

Racz hadn’t always been so shadowy or seemingly neglectful. Before she and her husband Leslie purchased the building, the site housed a variety of tenants. During the first half of the 20th century, it was occupied by several grocers, a drug company, and residents who enjoyed five-bedroom flats. After a succession of furniture stores operated there during the 1950s and 1960s, the Raczs spent two years transforming it into the medieval-styled Hungarian Castle. When the restaurant opened in 1972, it joined the large number of Hungarian eateries along the Bloor strip owned and patronized by fellow refugees who fled Hungary after the Soviet Union crushed the revolution in 1956. To make their eatery stand out, the Raczs hired Oscar Berceller, former proprietor of legendary King Street celebrity hangout Winston’s, as an advisor.

During the years it operated, the Hungarian Castle was known for its kitschy decor and windows covered in wrought-iron crests and gates. A basement bakery drew praise from customers for its goodies and scorn from health officials for its filth. The upper floors housed a series of bars ranging from the Spanish-themed El Flamenco to student watering hole Annie’s Place.

Following her husband’s death during the 1980s, Racz closed the Hungarian Castle. Those interested in the space received calls from Racz in the middle of the night to meet her at doughnut shops. Book City owner Hans Donker’s enthusiasm to move his store a few blocks east dimmed after such encounters, along with Racz’s insistence that he retain the restaurant’s furnishings. When he toured the space with Racz circa 1990, he noticed that display cases were filled with rotting pastry.

BMV owner Patrick Hempelmann was equally frustrated by his dealings with Racz. “We’d set up a meeting, come to a verbal agreement, and then she’d find some reason to pull out,” he told the Globe and Mail. When he purchased the building from her estate in September 2005, he found its interior resembled a horror-movie set. Liquor bottles still lined the bar and tables were set for dining. Pots were left on the stove and dishwashers were filled with plates. Grand pianos and raccoon corpses had rotted. The bakery was buried in four feet of water. It took three months, a crew of workers wearing ventilation masks, and 40 large dumpsters to clean the place out. Despite the decay, Hempelmann was relieved when the building was found to be structurally sound. A year after he bought it, book browsers filed in to spend hours looking for finds.

In some respects, the long decay of the Hungarian Castle mirrored the demise of the Hungarian community along Bloor West. Where it was once, as writer John Lorinc once termed it, “a veritable Budapest of eateries,” only the Country Style in the heart of the strip and the Coffee Mill in Yorkville survive. Perhaps the medieval warriors who graced the building’s exterior were fighting as best they could until they had to give in to the changing landscape.