Originally published on Torontoist on March 18, 2015. 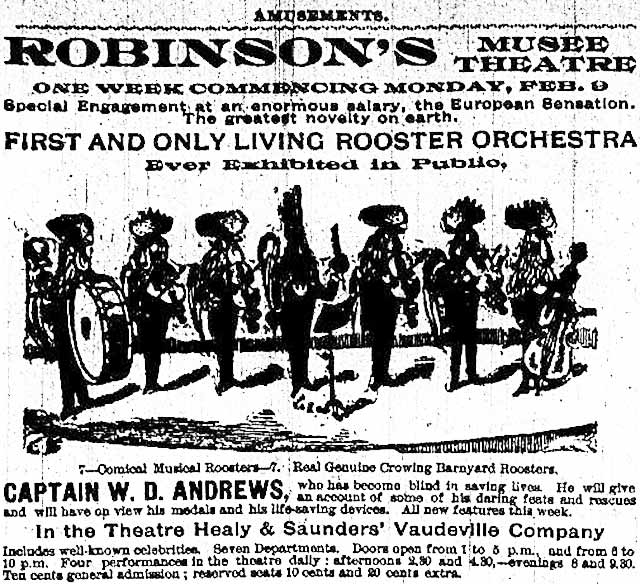 When it opened in 1890, Robinson’s Musee Theatre declared itself the “leading family theatre in the city” and “Canada’s great, best, and only amusement enterprise.” Beyond the hyperbole, the Yonge Street venue took a formula popularized by Barnum’s American Museum in New York City decades earlier: part theatre, part zoo, part freak show, and part exploiter of indigenous cultures.

Take the lineup advertised in December 1890. You can hear the carnival barker’s voice at work, promising all sorts of exotic sights to lure in the rubes…er…proper Torontonians:

Barney Baldwin, the only man living with a broken neck; the scientists and physicians puzzled. Gurnam Rose, the Midget Queen. Prairie Dog Village. A Whole Troup of Japanese Wonder Workers. [Reginald] Birchall, as he appeared before and after the execution. Clad in the original suit of clothes as at the time of the murder. The wax figures are true, life-like reproductions, and made from plaster casts exclusively for Mr. Robinson. The Aztec Mummies, relics of an ancient race 3,000 years old. Hungarian Gypsy Band. 10 Masterly Musicians. 10. Prof. Singleton’s Marionettes and Punch and Judy Show. Wax Groups. Mechanical Devices. 1,000 of other Curiosities. 1,000. In the Theatre—FRANK HALL’S ALL-STAR SPECIALTY and COMEDY CO. New attractions every week.

We’re not sure what the “prairie dog village” entailed, but it’s likely animal lovers and protection officials would frown upon the routines today. There were a lot of dubious animal acts at the Musee under its various ownerships, including boxing cats and the rooster orchestra. 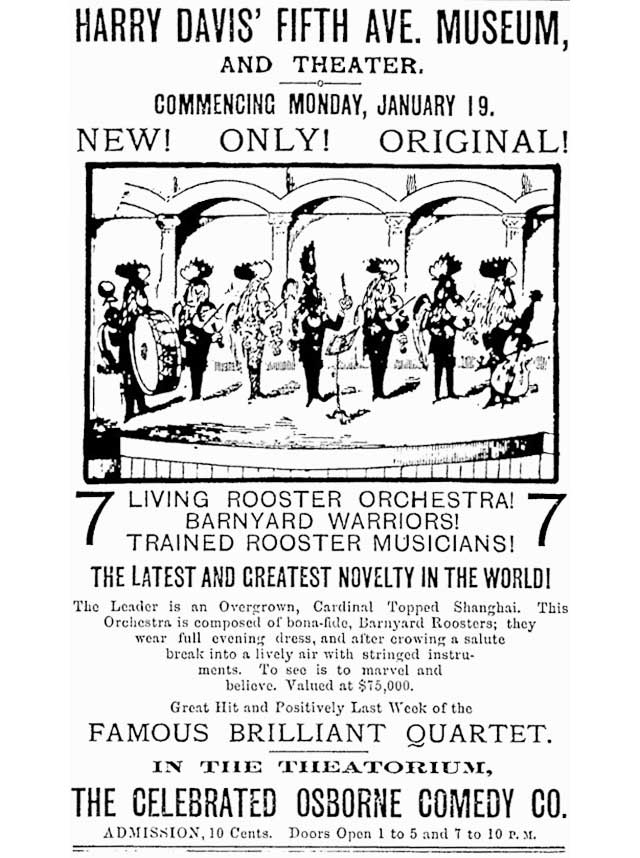 The musical roosters visited Toronto throughout 1891. They played engagements at the Musee in February and June, then appeared alongside duelling cats and trained seals at the Industrial Exhibition (the forerunner of the CNE) that September. Ads and press releases in Toronto newspapers revealed little about the roosters, other than that, as the Globe observed, they were “gazed upon with astonishment by all who visit the Musee.” An ad from an earlier stop in Pittsburgh tells more: they were dressed in evening wear, played stringed instruments, and were “worth” $75,000.

What was the ideal human pairing on a bill with a rooster orchestra? During their June engagement, the lecture hall displayed “The Lucassairs,” an albino father-and-son duo described as “an odd-looking family from the far-off islands of the Indian Ocean.”

Eventually some locales tired of roosters forced to play music. In 1921, the Star reported that showman John C. Essex was fined for presenting “The Great Sousa Rooster Orchestra” in Blackpool, England. Essex’s act included a bird named “Sandy McPherson” who was forced to do a Highland fling. When Essex tried to force the reluctant bird to perform in court, neither judge nor the magistrates on hand wanted to witness further cruelty.

Robinson’s Musee operated under various names during the 1890s, but it was under that moniker that it offered Toronto’s first public display of motion pictures in 1896. No roosters attended.