Originally published on Torontoist on January 8, 2008. 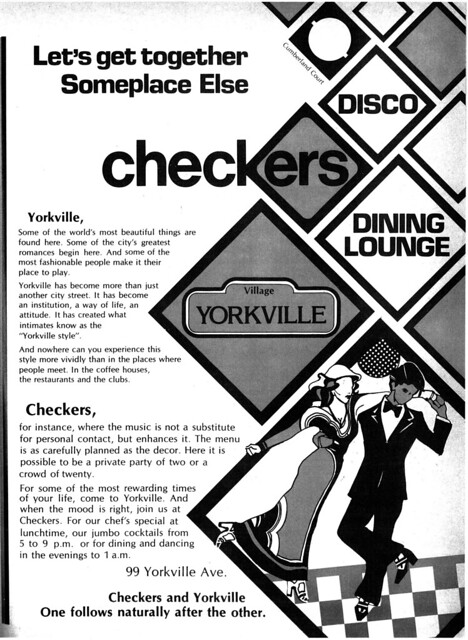 After reading today’s ad, Torontoist is certain of one thing—modesty was not a key element of the “Yorkville style,” especially when it came to attracting dancing queens and boogie kings looking for a place to strut their stuff. The neighbourhood had a cluster of disco floors waiting for John Travolta wannabes to demonstrate their dance skills and soak in the attitude. One might have been lucky enough to see celebrities like Sonny Bono indulge in the Yorkville way of life!

Nearly all elements of 1960s hippie Yorkville had been extinguished by the time Checkers opened on the second floor of Cumberland Court in early 1977. The last of the old coffeehouses, the Riverboat, remained in business for another year while upscale boutiques and dining spots set up shop around it. In an interview with the Toronto Star, a tourist from Winnipeg summed up the change in atmosphere. “Last time I was here in ’69, everyone was into pot. Now they’re into money.”

In a review for the Toronto Star, Bruce Kirkland noted that “the game Checkers plays is to create the illusion of sophistication—through luxury sofas and chairs set around classy wooden tables, better and more varied music than you find in routine discos, and the cultivation of a self-appointed chic crowd of straight couples and singles looking for excitement. Yet the service was slow and unreliable, albeit friendly, and the supposed main focus of a disco, the dance floor, was smaller than a subway washroom and about as atmosphere-laden.” He also felt that while drink prices were reasonable, a “nondescript” cup of coffee was a ripoff at $1.

In a survey of Toronto disco floors, the Globe and Mail was equally unimpressed with the size of the dance area. “The dance floor is located in front of a plate-glass window at the entrance, an arrangement that gives the unpleasant sensation of dancing in a fishbowl.” The neighbourhood competition included Mingles (“the place has all the warmth and charm of a sound stage”), Arviv’s (“much more pleasant to be seen sipping wine than working up a sweat”), Dinkels (“inhabitants of the dance floor range from 20-year-olds in Fairweather disco dresses to refugees from the Four Seasons in polyester leisure suits”), and Fingers (“it’s a place for intimate conversation and there’s a Latin twist to the music, an unusual and refreshing change”).

Patrons eventually got together someplace else as references to Checkers disappeared from local newspaper entertainment guides after the 1981 holiday season. Cumberland Court still exists and is home to the venerable Coffee Mill restaurant, which moved there in the mid-1980s.