Originally published as a “Historicist” column on Torontoist on July 9, 2011.

“A museum is a home of muses and in Canada, far enough from the slopes of Mount Helicon in space and time, those traditional patrons of the arts and sciences have their worthiest habitat in the Royal Ontario Museum.” Whoever wrote the 1956 edition of The Royal Ontario Museum: A Handbook felt these were appropriate words to introduce visitors to the wonders within.

Map of the main floor.

A few years earlier, in their travel guide Ontario in Your Car, John and Marjorie Mackenzie had kind words to say about the museum:

Some American naval friends of ours, who had spent many years in the Orient, said that they thought the Chinese Art Exhibition at this museum was the finest they had ever seen. But this is only one of the many and varied exhibits which are housed here. It is, indeed, “the record of Nature through countless ages; the arts of man through all the years.” If you have children with you, they are sure to be entranced by the huge skeletons of the Dinosauria, and by the Indian figures, arranged in life-like family groups.

The ROM of 1956 was an H-shaped building consisting of the original wing along Philosophers Walk opened in 1914 and an addition one built along Queen’s Park that welcomed its first visitors in 1933. The museum operated as a branch of the University of Toronto, an arrangement that lasted until 1968. It was open daily except on Mondays—we imagine the educational nature of the institution redeemed it in the eyes of all but the most zealous no-fun-on-Sunday types. Anyone desperate to wander in on Monday could catch a small glimpse of the exhibits on their way to the coffee shop that remained open. Admission was free except on Wednesdays and Fridays, when adults paid a quarter. The same admission fee applied for any of the seven “open nights” held throughout the year, where visitors could linger until 10 p.m. in the exhibit areas and enjoy guest speakers. For annual fees of either $5 (for Ontario residents outside of Toronto) or $10 (locals), members enjoyed perks like free admission, invitations to previews of special exhibits, guided tours for up to 10 people, two event calendars per year, an annual report, and discounts on U of T extension courses offered through the museum.

Kidney iron ore: not so tasty with steak in a pie.

The handbook’s gallery coverage was split into three main sections: the Earth (rocks and minerals), life (animals), and the “arts of Man.” Among the curios shown in the first section was a rock that resembled a cluster of kidneys.

Entrance to the Geology gallery.

The geology galleries enticed visitors with displays that included discoveries made during construction of the original Yonge subway line and a showcase on a site now associated with green space and a weekend market:

The west gallery is entered through a foyer, where photo-murals and specimens are displayed in an attractive manner. Three of the photographs depict geologists at work, while others pointedly illustrate many of the topics explained in the exhibits throughout the gallery. Of special interest is a plaque of the colourful building stones used decoratively throughout the museum building. The main displays follow in a series of alcoves, each alcove having a central theme. The first of these units depicts some of the rocks, and the geological history of southern Ontario, while other exhibits illustrate the geological information revealed by the excavations for the Toronto subway. The west wall of the alcove is dedicated to the Don Valley brickyard, where the sands and clays are the evidence of an extremely varied climate in the Toronto area during the past several hundred thousand years. 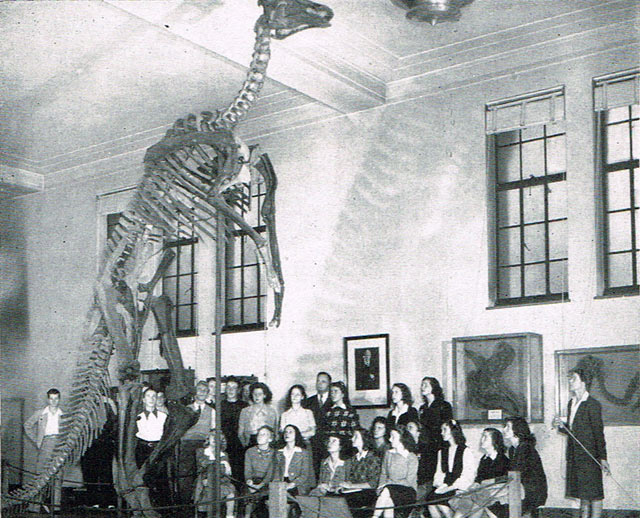 Then as now, dinosaurs were a children’s favourite. Most of the museum’s collection originated in the badlands of Alberta. Specimens were divided into five simple streams: duck-billed, horned, armoured, carnosaurs, and ostrich-like. Duck-billed dinosaurs like the one depicted in the guide were described as “probably inoffensive, herbivorous dinosaurs normally walking on four legs but capable of rapid motion on their hind legs when pursued.”

“House Fly: enlarged models tell the story of its unwholesome relations to Man.”

One exhibit the handbook described at length but didn’t show was a tribute to the passenger pigeon. The exhibit attempted to re-create the extinct bird’s habitat at Forks of the Credit during the 1870s:

In the background looms the blue-grey mass of the escarpment. In the middle distance lies a pioneer clearing in which stands a log cabin, and the foreground is the edge of a fine, old, beech-maple wood. The migrating pigeons, in their hundreds of thousands, stream across the sky and some are alighting to feed in the fields and at the edge of the wood. One drinks from a sap bucket while perched on the spile driven into a sugar maple. On the ground a male and female are billing in the fashion of domestic pigeons.

“From Muskrat to Hudson Seal, an Economic Exhibit telling the story of a fur coat.”

But the handbook did contain a nice picture of a display that would displease anti-fur activists: how a muskrat became a Hudson Seal coat.

In the transition from describing Eurocentric antiquities to those from the rest of the world in the “Arts of Man” section, the author made a statement about Western culture that surely would never be allowed in current museum literature.

Although the mechanical achievements of the European peoples have probably excelled all others, their civilization is, after all, that of only a small portion of mankind, and it is fitting in a Museum such as this that the fact should be clearly recognised. The ground floor has been given over, therefore, to the exhibition of the arts and crafts of aboriginal America, Africa and the Pacific Islands.

Gathering around a totem pole as an example of “teaching with objects.”

The handbook ends with a section on the museum’s education services. “For child and adult alike,” the author noted, “the experience of seeing and learning about real things makes history live and develops a better understanding of the relationship of man and nature throughout time and space.” The school group clustered around the totem pole likely came from within 250 kilometres of the museum. Before visiting, they would have been asked to figure out which areas of the museum they were most interested in, as long as those subjects matching up with their school’s curriculum.

As for students in remote areas, museum staff armed with suitcases full of exhibits travelled to them. One trip earlier in the year was spotlighted in the Toronto Star:

History is being taken to Ontario school children in suitcases. Royal Ontario Museum teachers are taking historical items to Northern Ontario schools for pupils to study. Julia Laronde, North Bay, holds a snowshoe and an Indian hammer. Sharon Shore is all decked out like a fur trapper. This year marks the eight annual “expedition” of museum teachers to the northland. The teachers carry over 150 objects with them during their trips to Northern Ontario schools. Dennis Jeanneault is shown all dolled up in the breastplate of an Elizabethan page boy. Different areas of the northland are visited each year by the instructors, to show relics to pupils who are unable to travel to a museum…Trips last five weeks and last year teachers visited 267 schools and talked to 9,300 students.

We wonder how many of those students eventually visited the museum in person.

Unless noted, all images taken from The Royal Ontario Museum: A Handbook (Toronto: University of Toronto Press, 1956). Additional material from Ontario in Your Car by John and Marjorie Mackenzie (Toronto: Clarke, Irwin, 1950) and the January 25, 1956 edition of the Toronto Star.

The original piece did not include these maps of the upper floors.

The old wing names are still visible if you into the rotunda next to the Queen’s Park entrance. Here’s one side of the first floor, as seen in February 2020… 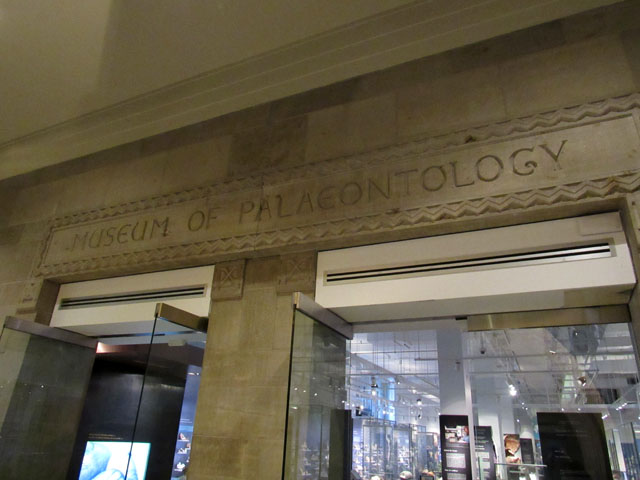 …and both sides of the second.

Around this time, the ROM received a shout-out in Holiday magazine’s salute to the city.

An example of how exhibits were described by the press in the mid-1950s.