This installment of my “Retro T.O.” online column for The Grid was originally published on May 22, 2012.

To some, it provided a welcome respite from braving the elements on their lunch break. For others, especially those working in its retail outlets, it made them feel like a mole. The three kilometres of underground shopping malls and tunnels that 175,000 office workers passed through daily in May 1980 formed the spine from which today’s PATH system grew.

Since the opening of the Toronto-Dominion Centre’s sub-surface shopping complex in 1967, planners and developers envisioned an underground network connecting the core’s major business, shopping, and transportation facilities. One of the first reports commissioned by the city was 1968’s “On Foot Downtown,” which concluded that downtown pedestrians required a space that wasn’t impeded by industrial pollution, noise, traffic congestion, or too many of their fellow human beings. “We had reached the point where sidewalks couldn’t handle all the people,” former Toronto planning commissioner Matthew Lawson told the Star in 1980. “At the same time, all our forecasts said such conditions would only worsen because of the growth of the downtown work force.”

It was hoped that a climate-controlled underground route would avert these problems and provide protection from Mother Nature—as Toronto development commissioner Graham Emslie told the Star in 1971, “let’s face it, there are a hell of a lot of days you’d just as soon not walk outside.” The first major connection in the primordial PATH, which linked Nathan Phillips Square to the Richmond-Adelaide Centre, opened in January 1973. By May 1980, apart from a gap at Adelaide Street that became a haven for jaywalkers, one could wander underground from City Hall to Union Station. 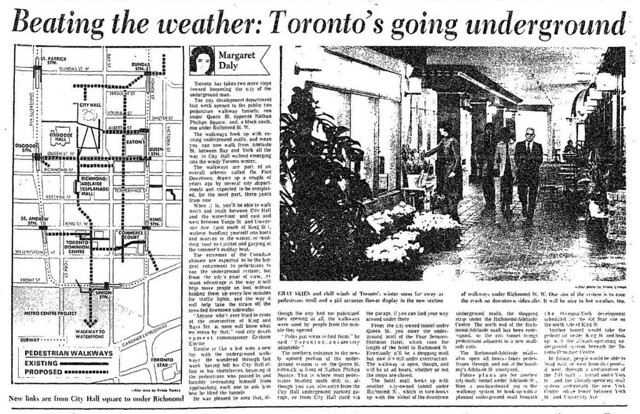 While many users extolled the network’s conveniences, some urban planners and consultants were alarmed by the potential effects on surface life. An adviser to a planned revitalization of Yonge Street found it “worrisome” that in the future, people would take the subway downtown, shop at the Eaton Centre and other underground shopping complexes, then head home without ever setting foot outdoors. “We don’t want to become a city of moles,” noted Toronto planning and development commissioner Steve McLaughlin. To mitigate such a fate, a recently written central plan for the city encouraged developers to place higher priority on street-level retail in future buildings. According to McLaughlin, “we don’t want the downtown streets to contain nothing more than block after block of office lobbies.” 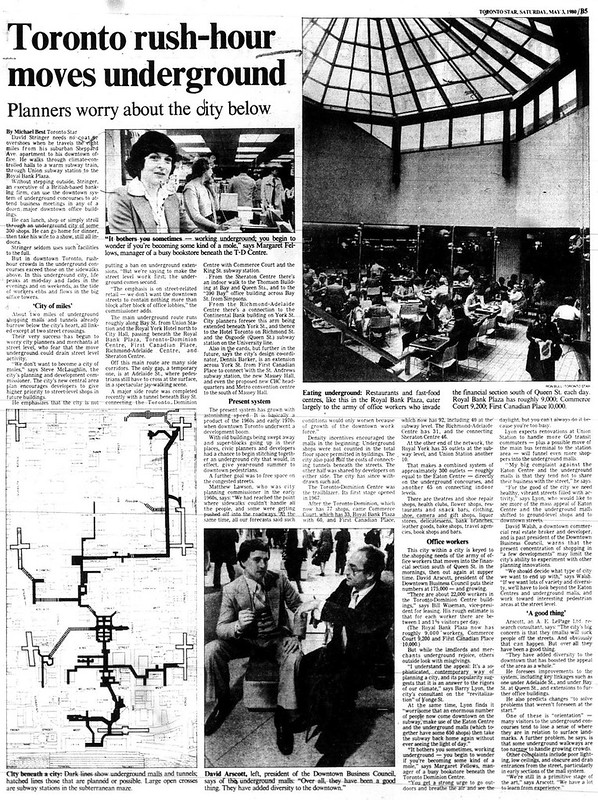 Back underground, Downtown Business Council president David Arscott provided the Star with a shopping list of improvements. Filling the gap under Adelaide Street was critical, as was a proper orientation system to give users a sense of which surface landmarks they were wandering under. Complaints Arscott received that required addressing included narrow walkways, poor lighting, low ceilings, and boring street entrances. “We are still in a primitive stage of the art,” said Arscott. “We have a lot to learn from experience.”

Within the next decade, some of those issues were resolved. The Adelaide gap was fixed in 1984, while a tunnel opened under Bay Street in 1990 that properly connected the Eaton Centre and Simpsons (now The Bay) to the rest of the PATH. Signage would long remain a problem, one caught between city politicians who wanted clear wayfinding versus landlords who didn’t want to create the impression that the network was a truly public space.

“People bound for jobs in the financial district pour out of Union station into the underground mall section of the Royal Bank Plaza. It’s been described as an ‘environmental vaccuum’ by some due to the poor artificial lighting and the mechanically recirculated stale air.” Photo by Erin Combs, 1985. Toronto Star Photo Archive, Toronto Public Library.

While a few people may have mutated into moles over the years, the surface streets remain filled with those seeking a breath of unfiltered air during the workday.