Originally published as a “Historicist” column on Torontoist on November 29, 2008.

November 12, 1953: shoppers descended on Danforth Avenue a few doors west of Woodbine to await the grand opening of the eighth store in the budget-conscious Power supermarket chain. Care to join the crowd and check out the offers in aisle three?

The Power chain’s origins dated to 1904, when Samuel and Sarah Weinstein opened a grocery store named after themselves near present-day Bay and Dundas. The family’s first store under the low-cost Power banner opened at Coxwell and Danforth in 1933 with the slogan “Why Pay for Fixtures?” The same year that 2055 Danforth Avenue opened, Power was purchased by Loblaw Groceterias but maintained a distinct identity and independent marketing policies. Samuel and Sarah’s son Leon ran the company by this point and eventually served as president of Loblaws from 1968 to 1970.

The grand opening ad was posted by the front door. Staff and dignitaries were photographed as they pondered how to cut the ribbon before letting shoppers in. Scissors? Knife? A quick chop with the flower bouquet?

These bag boys were primed to start packing away purchases. Current city officials would be proud of the paper bags on display.

The Power name faded away during reorganizations of Loblaws store banners in the 1970s. The company still operates at least two of the locations listed in the grand opening ad as No Frills stores (Parliament Street and Eglinton Avenue West), while the Sunnybrook Plaza store now operates as a Pharma Plus. As for 2055 Danforth…

…it sits vacant, surrounded by a fence bearing “no trespassing” signs.

Additional material from the June 18, 1968 edition of the Globe and Mail.

The site was eventually filled in and, as of winter 2019, is occupied at street level by a Firkin pub.

Beyond the grocery business, Leon Weinstein was urged to run for the Liberals as a Toronto mayoral candidate in 1969, as I recounted in this excerpt from a Historicist column on that campaign:

The Liberals were eager to enter the municipal ring, figuring that their dominance of the city’s federal seats could translate into votes at City Hall. The party’s efforts at securing a potential mayoral candidate were headed by Davey, who spent most of the year (unsuccessfully) on the prowl. Longstanding councillors with ties to the party resisted and vowed to remain independent candidates to earn as many votes as possible—as former controller and mayor Allan Lamport put it, “why should I put on a party label and alienate the other fellows?” Splits among federal and provincial party officials about the wisdom of entering municipal politics did not help the process. The process of choosing a mayoral candidate turned the party’s convention at St. Lawrence Hall on September 23 into a fiasco. Early in the evening, three people were nominated, including a thirty-one year-old political scientist named Stephen Clarkson. Among those in the crowd was Loblaws Groceterias president Leon Weinstein, who was whisked away into a separate room and urged to run. Through a series of misunderstandings, Weinstein agreed on the condition that he would be the only candidate to be nominated, which wasn’t the case. After much confusion, during which Weinstein’s was submitted for the ballot minutes before nominations closed and Davey attempted to convince Clarkson to drop out, Weinstein took the podium. He announced that he wasn’t interested in the job then left the room, reportedly in tears—Globe and Mail reporter Michael Enright summed up Weinstein’s night as “a walking study in political innocence.” Clarkson fell short of a majority by two votes on the first ballot, but his remaining challengers decided to throw in the towel and back him. Clarkson’s victory drew a tepid reaction and many of the attendees felt disillusioned with party brass. 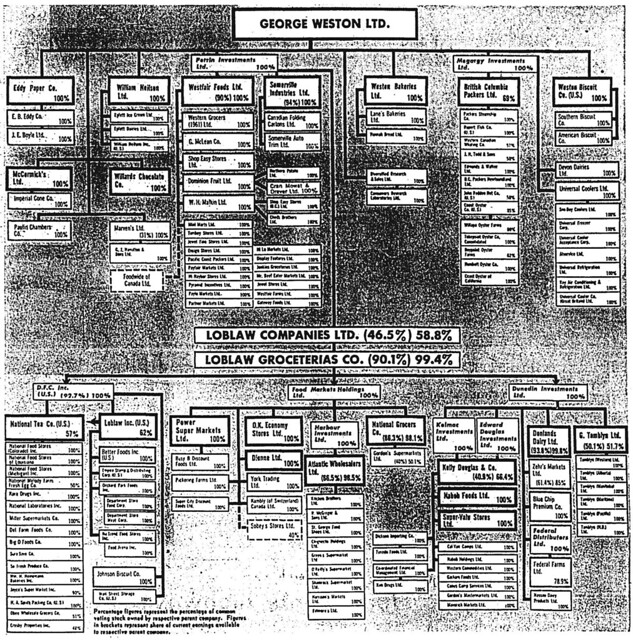 Globe and Mail, December 9, 1966, Click on image for larger version.

Can you find where Power fit in the giant flow chart of companies partly or fully by Loblaws and the Weston family in the mid-1960s?