Torontonians love arguing about the same proposed transit lines ad nauseum. The current quest to bring Scarborough the subway it deserves as a replacement for the Scarborough RT‘s replacement feels like a replay of past battles where a streetcar/LRT line was displaced in favour of a pricier, sexier option.

Among the priority studies recommended in January 1975—by a joint provincial/Metro Toronto task force on the region’s transportation needs for the next quarter-century—was a high-speed transit line linking the recently approved Kennedy subway station to Scarborough Town Centre, Malvern, and Pickering. Scarborough officials saw this line as key to spurring development in a downtown area based around the new civic centre, which would employ 25,000 people.

Based on passenger capacity projections, the plan that emerged was a streetcar line on its own right-of-way. While Scarborough officials glowed about the development possibilities, others, like Toronto city councillor John Sewell, believed the opposite. In a series of Globe and Mail op-eds, Sewell argued the line would serve commuters who worked in downtown Toronto and would be cursed by debt and low ridership. His appeal to the Ontario Municipal Board to hold public hearings was rejected when it approved the line in September 1977.

Another early opponent was North York Mayor Mel Lastman. During a December 1978 North York council meeting, Lastman said that TTC services in his jurisdiction shouldn’t be sacrificed because of the selfishness of a fellow Metro municipality. (Lastman went on to exhibit just that when he later fought to preserve the Sheppard subway line as a development tool for North York.)

The streetcar line was intended to commence soon after Kennedy station opened in 1980. Instead, TTC staff reports presented in June 1981 recommended a new vehicle Queen’s Park had heavily invested in. Through its interest in the Urban Transportation Development Corporation (UTDC), the province had been promoting the Intermediate Capacity Transit System (ICTS) since the mid-1970s as a cheaper alternative to subways. While there were technical problems with the system’s linear-induction motors, the province saw the vehicles as ideal for a future network of TTC and GO lines. When the TTC approved the system switch, Metro Toronto chairman Paul Godfrey was confident the transit provider would work the bugs out.

Scarborough mayor Gus Harris thought there was “something very screwy” in the TTC’s sudden change of heart. He was quickly isolated for his concerns over ICTS testing problems; Scarborough council approved the switch after a six-hour debate. Their decision was boosted by promises that the province would cover cost increases and that the vehicles would be quieter than streetcars. Some councillors regretted their vote when reports of exploding motors during testing filtered back to them a few months later. One TTC official dismissed the lack of public scrutiny of the project, noting that most people didn’t understand the complexities of ICTS technology.

Though several TTC officials favoured naming the line “Metro Rail,” the name “RT” was revealed as the winner of a public contest in January 1982. Speculation that riders would humanize the line’s name to “Artie” proved idle.

Local testing of the new vehicles began in April 1984. The public received free rides on the test track that summer. John Sewell, by now a Globe and Mail columnist, still wasn’t impressed with the line, calling its seating “uncomfortable” and “not private enough.” Gus Harris publicly reversed his position, going from an “I told you so” attitude as project costs rose from $134 to $196 million, to boosting the technology as a sign that Scarborough was “the city of the future.” There were bugs galore, starting with the return of the first four cars to UTDC due to uneven wheels. Late fleet delivery prompted the TTC to operate a reduced schedule once the line opened; shuttle buses would run after 10 p.m. Monday through Saturday and all day Sunday.

Up to 1,000 dignitaries and TTC employees attended the RT’s opening ceremony on March 22, 1985. Harris called it the “greatest day in the history of Scarborough,” while a message from Premier Frank Miller (who didn’t attend) observed that “the RT is proof positive that Ontario can challenge the world and produce the best facilities anywhere.” Guests were treated to champagne and a performance by U of T’s Lady Godiva Band at Kennedy station. Also attending were placard-waving protestors angry at the TTC for not making the new line wheelchair accessible.

“Wheelchair protest: As invited guests prepare to board Scarborough’s new $196 milliion rapid transit system at Civic Centre yesterday; protestors showed up in wheelchairs to complain that the disabled have been denied access to the new line.” Published in the Toronto Star, March 23, 1985. Photo by Alan Dunlop. Toronto Public Library, from the Toronto Star Archives, tspa_0011910f.

The next day, 30,000 people flooded the seven kilometre line to take advantage of free rides during the first official day of service. The biggest complaint during the RTs first week was the small size of the two-car trains. Other complaints soon arose, especially from neighbours between Kennedy and Lawrence East stations who found the RT too noisy. Despite attempts to fix the problems, caused by flat spots on the wheels and rail joints, several complainants eventually wound up with sizable property tax breaks for their misery.

As other problems emerged, the transit system of the future no longer looked so bright. The extension to Malvern was killed due to cost, as ICTS didn’t prove much cheaper than a subway. As early as 1987, local politicians mused about converting the line into a subway, but the TTC indicated that would also cost too much. There was speculation that the RT had to continue operating so that UTDC could sell its system, which had been bought by Detroit and Vancouver, overseas. The line was shut down for over two months during the summer of 1988 to replace a turnaround loop at Kennedy whose curves were too tight for the ICTS cars to handle. As the line’s lifespan dwindled, thoughts about its replacement came down to the LRT proposed in Transit City and the subway championed by Mayor Rob Ford. Whichever form wins, don’t count on it being the last word. 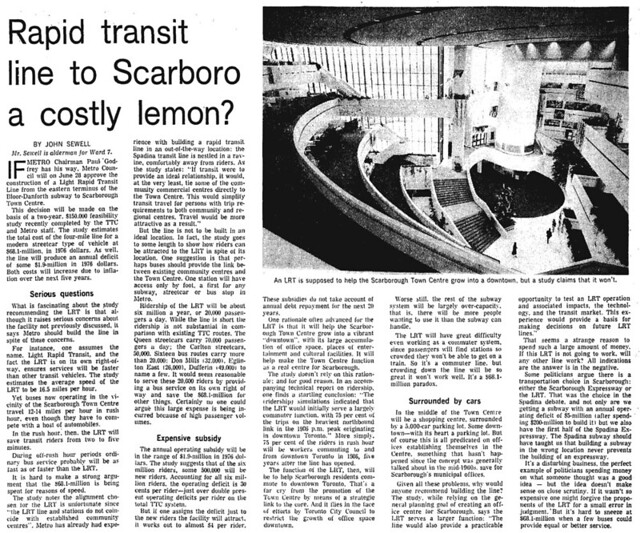 A sample of the anti-Scarborough LRT articles John Sewell wrote for the Globe and Mail, this one taken from the June 10, 1977 edition (click on image for larger version).

One thought on “Scarborough Gets an RT”