Originally published on Torontoist on March 23, 2007. 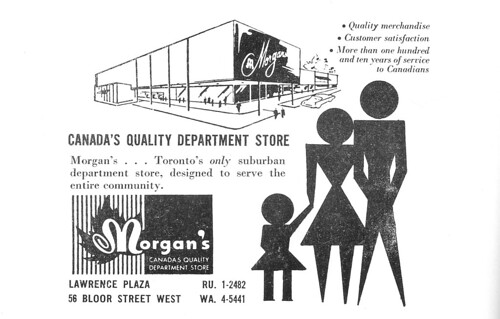 Simpson’s? No, they followed Eaton’s a year later, landing in Scarborough at Cedarbrae Plaza.

Try a chain that only lasted in Toronto for a decade, but whose locations served those moving into areas like North York and Etobicoke.

Morgan’s roots were in Montreal, where Henry Morgan opened a dry goods store in 1845 (originally Smith & Morgan, until Smith sold out a few years later). In 1891, the store moved to St. Catherine Street, the first of several department stores to locate in what soon became Montreal’s retail centre.

Morgan’s entered Toronto in 1950, with the Bloor Street store mentioned in this ad. As they claim in this ad, Morgan’s was the first department to move into Toronto’s suburbs, with stores at Lawrence Plaza in North York (1955) and Cloverdale Mall in Etobicoke (1960).

Morgan’s presence in Toronto was short-lived, as the company was sold to the Hudson’s Bay Company towards the end of 1960, which would HBC’s first venture into department stores in eastern Canada. While the Ontario locations saw a name change within a few years, the Morgan’s name hung on in Quebec until 1972 (HBC would repeat this tactic years later, when the Simpson’s nameplate was reduced to Toronto). The flagship store on St. Catherine still operates.

As for the Toronto locations, the Bloor Street address is buried within Holt Renfrew, Lawrence Plaza is split between Winners and Dominion and Cloverdale is now home to Zellers.

Originally published on Torontoist on August 8, 2012.

A menu full of cozy comfort foods for harried shoppers, kids tagging along, and managers from nearby industrial plants along Scarborough’s Golden Mile. That, at any rate, is who we imagine today’s ad—for the restaurant inside a Morgan’s department store—was targeting. While some of these old Toronto favourites linger on in diners and cafeterias, milk and crackers is nowhere to be found on menus at modern eateries, just as “smorgasbord” has given way to “buffet.” There are times when we wonder if bylaws existed in every municipality within Metro Toronto that obliged all dining establishments to serve roast beef with Yorkshire pudding and a salad plate incorporating cottage cheese.

Opened on August 22, 1963, the Eglinton Square Morgan’s was the fourth Metro Toronto location since the chain entered the market in 1950, and the first since Hudson’s Bay Company took over the business in 1960. The event was marked by the arrival of store manager D.B. Murdy in a helicopter, which was promptly offered for sale after he disembarked. Besides choppers, the store also allowed customers to order “anything else possible and legal.” The Hearth was a second floor cafeteria that seated 150 and, according to the Star, was decorated with “six murals of early Toronto plus antiques such as flintlock rifles, copper kettles and spinning wheels.” For the convenience of drivers, a spiral parkade adjoined the store.

The store’s days as Morgan’s were short-lived. The following year, management dropped the brand outside of Quebec and renamed the stores The Bay.

Additional material from the August 21, 1963 edition of the Toronto Star. 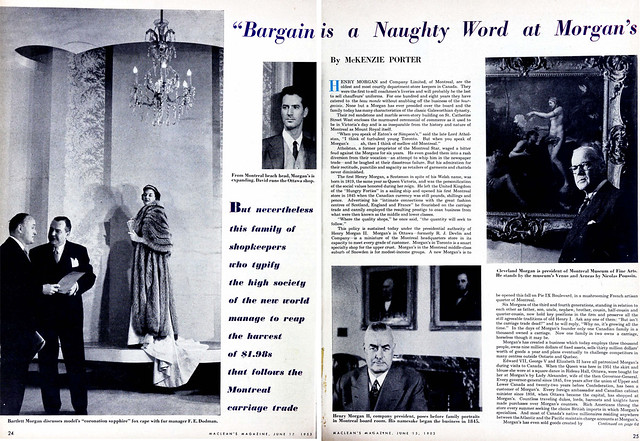 A spread opening a seven-page article on the history of Morgan’s and the state of its business as it expanded during the 1950s. An excerpt on the store’s policy towards “bargains” at its downtown Montreal flagship (warning: outdated language is used by the writer):

Morgan’s abhors the word “bargain.” Nothing is ever “cheap” at Morgan’s. The advertising copy writers on Morgan’s staff are niggardly with the word “sale.” But every month Morgan’s offers a prize of two dollars to any member of the staff who sports in a rival store a comparable article selling at a lower price. Last March there were only three winners.

The budget floor in Morgan’s is not in the basement because that would give it an unfortunae association with “bargain.” It is on the third floor, and the third-floor staff is watched with particular care to see that its customers are treated with the same deference observed in the more ritzy departments.

On the budget floor models slink around in twenty-four dollar dresses with the same femme fatale fluidity they assume in the more expensive salon downstairs. Last April when Eve Trill, the fashion director, was posing models for catalogue photographs of cotton house dresses at five-ninety she made them wear dainty gloves and cute hats to show that the garments were suitable for outdoor wear too.

As of early 2018, none of the three stores listed in this article remain Bay-owned stores. The Bloor flagship is now Holt Renfrew, while Lawrence Plaza is split between Metro and Winners. Cloverdale, after a stint as a Target, is planned to be redeveloped into more retail, a gym, and a food court.

The Toronto Star‘s preview of the Eglinton Square Morgan’s, from its August 21, 1963 edition.

A clearer version of the photo used in the previous article. While you can still park on the roof of the main section of the mall (which involves a neat retro experience of driving up the ramps), the parkcade shown here has been torn down. With the Eglinton Crosstown LRT headed in Eglinton Square’s direction, a redevelopment plan has been proposed which would retain the mall and add residential towers.