Originally published on Torontoist on January 17, 2012.

There once was a time when newspaper book editors could relax on a tower of bestsellers, comforted by the knowledge that their section received full blessing from the bean counters.

As today’s ad notes, the revamped Telegram books page featured editor George Anthony’s column on general notes from the publishing world, a selection of current reviews, and columns dedicated to mystery, paperbacks, and children’s literature. Apart from the columnists, the reviewers were drawn from across the paper’s staff, ranging from entertainment writer Sid Adilman to newsman Peter Worthington.

One publication unimpressed by Anthony’s selection of friends to hobnob with was Books in Canada, which devoted a page of its debut issue to the revamp. That all of the headlining authors and books piled under Anthony were American stuck in the magazine’s craw. Even the book he was reading, The Sensuous Man (whose prime advice, according to its review in the Telegram, was to watch monkeys copulate at the zoo), was from south of the border. The article noted that the combined Canadian sales of the seven listed authors’ most recent books were less than Pierre Berton’s previous opus, The National Dream. With bookselling in Canada calculated to be more difficult than in the United States, “is it any wonder that Canadian publishers beat their heads against the wall when they see valuable newspaper space being devoted to the latest imports?”

We are left to speculate: will he move into a new social sphere where he might “hobnob” with Norman Mailer, William Gass, and Kate Millett, or, horror of horrors, might he find that Canadian writers like Pierre Berton, Farley Mowat, Margaret Laurence, Peter Newman, Leonard Cohen, not only sell more books in this country than do his American friends, but are also willing to hobnob with newspaper critics.

We browsed several of the Telegram’s book sections from the spring of 1971. Though Anthony’s column mixed gossip from both sides of the border and the genre columns often discussed Canadian books, few domestic titles were featured in the main review section. We suspect the primary reasons were reader interest in foreign books and limited room to fill (there was barely any white space on the pages we reviewed).

When the Telegram folded in late 1971, Anthony moved to the Sun, where he served as the tabloid’s original entertainment editor before beginning a long career in the television industry.

Additional material from the May 1971 edition of Books in Canada.

Here is the Books in Canada piece criticizing this ad campaign.

And here’s a sample of what the Tely’s book page looked like, taken from the April 24, 1971 edition. Click on the image for a larger version. 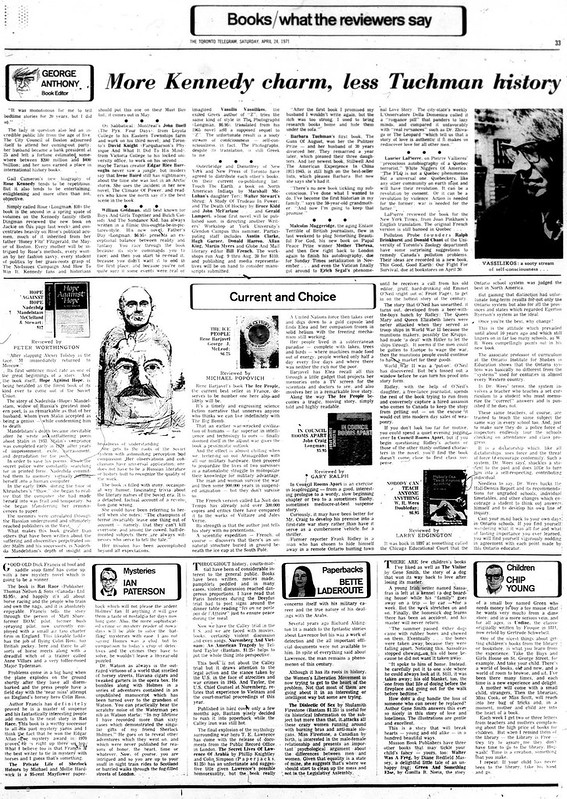