Originally published on Torontoist on January 10, 2012.

9:30 a.m., January 2, 1969: a group of police-escorted limos filled with three generations of the Eaton family arrived at their Queen Street department store. As two of President John David Eaton’s granddaughters opened the store with a gold-plated key, fireworks exploded from the roof. Blasts were fired every four seconds until 100 went off. Inside, the Eaton family was greeted by a children’s choir and over 1,000 past and present employees. The entourage proceeded to the statue of store founder Timothy Eaton to officially launch the company’s 100th anniversary celebrations. 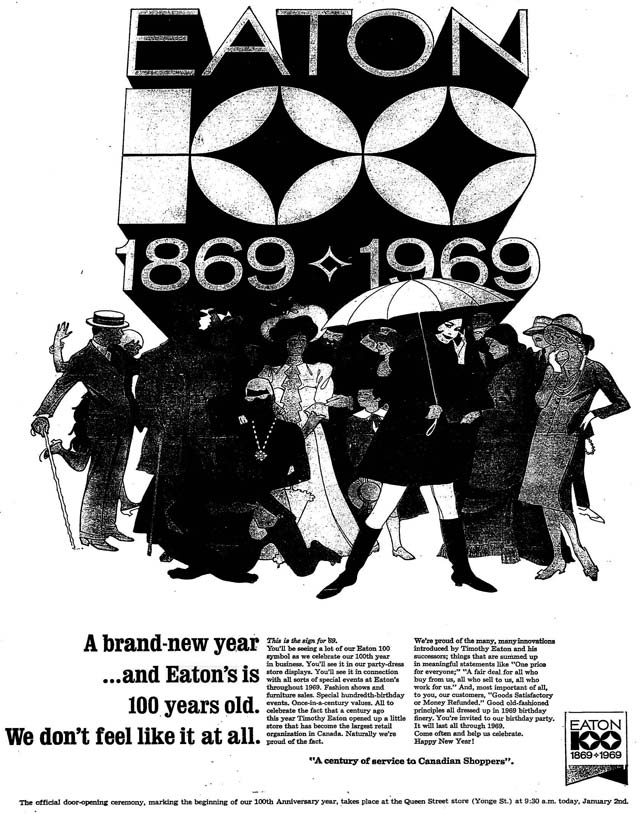 John David Eaton’s speech got off to a rough start when he mixed up his seasonal celebrations. “First of all a Merry Christmas…I mean a Happy New Year.” After a pause, Eaton joked “That’s a good way to start.” Though the slip was accidental, it may have signalled Eaton’s weariness with the duties he had been groomed for from a young age. After 27 years of running the company, Eaton retired from the presidency in August 1969.

Following a few more remarks, Eaton pushed a button which illuminated a six-foot “Eaton 100” logo. After the ceremony was over, a retired delivery man, whose association with the store dated back to the horse-and-buggy era, shook hands with Eaton. The teary-eyed man told Eaton, “I’m so proud.” Others in the crowd were less interested in greeting the owners—one woman asked “where are the shirts?”

Centennial activities were held throughout the year, culminating in a celebration at St. Lawrence Hall in December that included a seven-foot high birthday card and the presentation of an illuminated scroll by Mayor William Dennison. Given the mistakes Eaton’s management made during the company’s 30 remaining years in business, it might have been one of the last times they accepted anything that was illuminating.

Additional material from The Eatons by Rod McQueen (Toronto: Stoddart, 1998) and the January 2, 1969 edition of the Toronto Star.