Originally published on Torontoist on August 30, 2011.

Among the musical acts at this year’s Canadian National Exhibition is one making a final Toronto appearance. After over 50 years in the music business, Glen Campbell announced his current tour is his last due to a diagnosis of Alzheimer’s disease. Tomorrow night’s show won’t be Campbell’s first at the Ex—back in 1969, he was one of the key attractions of that year’s fair.

Despite rainstorms, sold out crowds packed the CNE Grandstand on August 16–17, 1969, to hear Campbell sing hits like “Dreams of the Everyday Housewife” and “Galveston.” When his first show was delayed, Campbell, who strolled onstage in a tuxedo and cowboy boots, apologized to the audience. “Sorry this show is so late startin’,’” he said with an Arkansas twang, “but I dropped my watch in sheep dip and it killed all the ticks.”

Newspaper reviews focused on Campbell’s square image and audience, his corny patter, and how lousy the supporting act (the Four Freshmen) was. The Globe and Mail’s Ritchie Yorke noted that the crowd “was just plain folk, the sort who don’t mind last year’s or the year before’s fashions. Like his audience, Campbell was not particularly hip, and he seemed to be fighting any possibility of anyone getting the idea that he was.” The Star’s Marci MacDonald observed the crowd was “mainly female, over 30 or under 12—family folk lookin’ for a good clean country boy.”

The Telegram’s Peter Goddard found Campbell so inoffensive that “a bottle of milk seems somehow vulgar by comparison,” but also felt that the singer was far more talented that the stereotypes about his audience (lonely housewives, Midwestern Republicans) suggested.

Additional material from the August 18, 1969, editions of the Globe and Mail, Toronto Star, and Telegram. 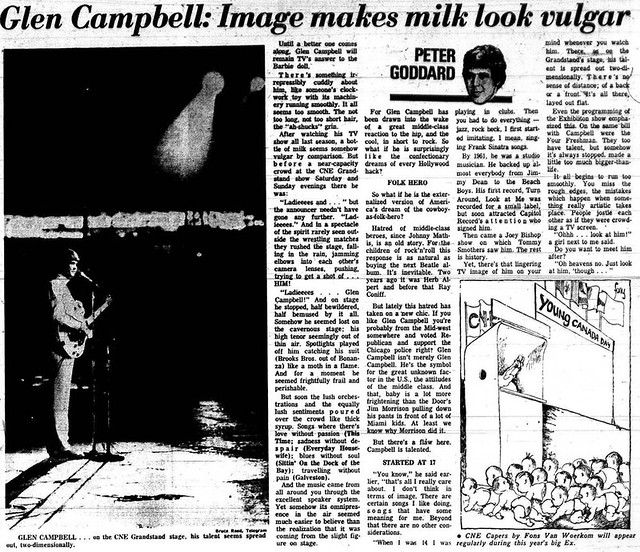 The full review from the Telegram (click on image for larger version). Glen Campbell passed away in 2017.