Originally published on Torontoist on August 24, 2010. 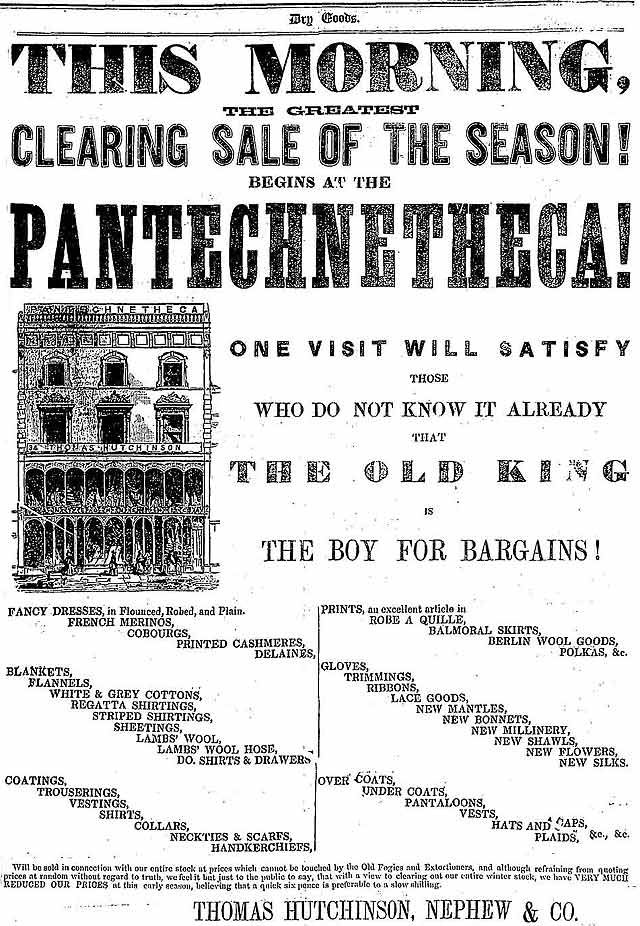 We dare you to say this store’s name five times fast.

Proprietor Thomas Hutchinson did not lack for modesty when touting the economical value of the products he sold at his dry goods emporium. In an ad in a catalogue produced for the Provincial Exhibition (forerunner of the CNE) in September 1858, he proclaimed that the store had “already obtained for itself a merited celebrity for selling the CHEAPEST GOODS ever sold in Canada.”

From the conflicting accounts regarding the store’s history, here’s what we’ve pieced together. Hutchinson and Robert Walker formed a partnership to sell dry goods on King Street East around 1846. Within seven years, their business relationship dissolved and Walker kept the store, which evolved into the Golden Lion department store (so named because of a statue that the store quickly became identified with). The bitter split led Hutchinson to establish his own dry goods store sometime between 1853 and 1857, which was located at either 45 to 49 or 55 to 59 King Street East.

The “Old Fogies and Extortionists” had the last laugh, as bargains failed to sustain the Pantechnetheca into the business equivalent of puberty. After, in the words of Telegram publisher John Ross Robertson, “a very lively but a short-lived career,” the store ceased operations in 1859.