Originally published on Torontoist on September 25, 2007. 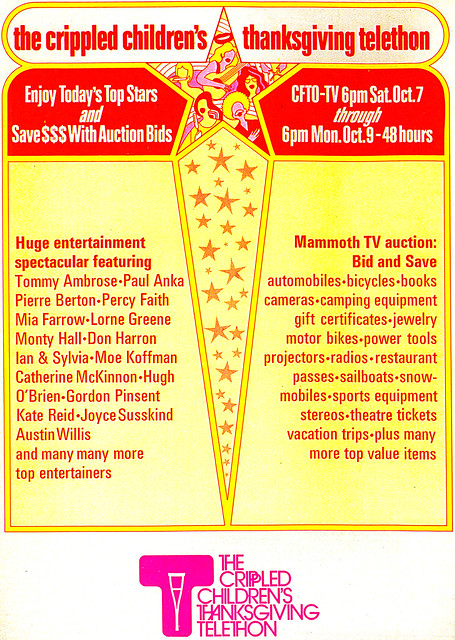 Merriam-Webster defines “telethon” as “a long television program usually to solicit funds especially for a charity.” Almost from the dawn of broadcast television on both sides of the border, time has been set aside to urge viewers to support a long list of causes.

This tradition began in 1949, when a 16-hour telethon to raise money for the Damon Runyon Memorial Fund to fight cancer brought in just over a million dollars in pledges from viewers in New York City. The first national appeal came three years later, when Bob Hope and Bing Crosby urged people to dig into their pockets to support the 1952 U.S. Olympic squad.

In today’s more sensitive climate, the title of this telethon would not pass muster, as it conjures images of pitiable children hemmed in by their mobility devices and prosthetic body parts. The presentation of those helped by pledges has improved since 1972, though pathos-laden images of children in wheelchairs will survive as long as Jerry Lewis draws breath. This ad resists going for pathos, focusing instead on its nearly-all-Canadian lineup of guest performers (the exceptions being Mia Farrow and western TV star/youth leadership philanthropist Hugh O’Brian, the latter’s name spelled incorrectly).

1972 was a busy year in the telethon world, with several new ideas tried out. South of the border, the Democratic Party booked eighteen hours of airtime on ABC in July to help pay off debts racked up during that year’s presidential race, an idea hatched by former Kentucky Fried Chicken head/future governor of Kentucky John Y. Brown Jr. While some money was raised, the party still lost to Richard Nixon in the fall.

That September, a 30-hour telethon for the Committee for an Independent Canada served as both a method to provide support for the promotion of Canadian culture and economic interests and a final technical test for Toronto’s newest television station, channel 79 aka City-TV. Among the featured acts: Pierre Berton reading The Shooting of Dan McGrew and journalist Patrick Watson demonstrating how to make pancakes from bullrush pollen. Items up for bid ranged from boxing gloves used by George Chuvalo and Muhammad Ali to Mel Lastman’s original Bad Boy convict suit (an item that deserves to be immortalized in a museum).